Guess they are not taking this too well:

The post is still up in one of more prominent message boards dominated by Southern Cal Trojan fans. Here is the text:

The culprit in all this is affirmatve action!


If heritage hall was run by someone with a brain instead of that retarded negro who like the stupid Mexican mayor couldn't pass the bar exam even after 5 tries, then maybe , just maybe Checkers wouldn't have gottenvaway with his renagade program.

Anyone think it was a good Idea to have open practices with agents in the locker room?

I hope the next AD can at least spell his name!

Oh and how's that other affirmative action Muslim doing on job creation and plugging that oil leak?

That is not the only "interesting" (I will leave it at that) reaction popping up in Trojan online communities more generally known as the "Trojan Family". More after the jump.

Mike Garrett - the former Trojan Heisman winner - is getting destroyed and lit up all over Southern Cal online communities like this:

I'm not sure he knows how to be a gentleman. By most accounts he is an arrogant man, and pride cometh before a fall. Just look at the cowardly manner in which he addressed the self-imposed basketball sanctions - a video on the website. But that's in keeping with having coach KO tell the hoops team (rather than manning up and doing it himself) and firing J Rob on an answering machine.

Even Cheatey Petey is already "DEAD" to one Trojan fan:

I'm sorry, but I may take some heat from some of you, or I may not, but I don't care. If it ends up that Bush, Carroll, Mcnair and or others are responsible for whatever sanctions that we end up getting by the NCAA, then those people are DEAD to me and I believe that they should be held responsible for their actions or involvement in this whole mess. Regardless of how important Bush or Carroll were to USC, the university is far more important as a whole than the individual. Just finished putting my SC gear on and I'm on my way to work ready to take anything that any of my colleages try to dish out on me. Fight On!

All on a sudden Trogans are so interested in taking responsibility and accountability: 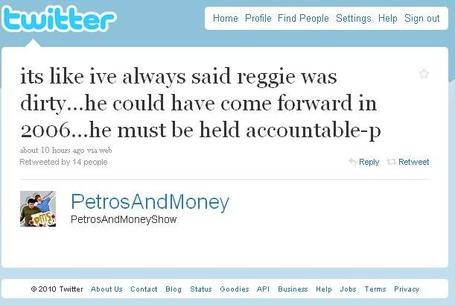 Well I have grown to like Petros P. I think he is a good Trojan. However, where was this when Reggie was flipping into the end zone while thousands of thousands were going to his parents crib in San Diego?

Some Trojans are still comforted by the fact that they are led by Hello Kiffin:

But hey, we've got Lane Kiffin!

Like Moses, to lead us out of the wilderness.

Here's a coach with years of experience running a college football team, just what we need in this our darkest hour. And thank God he wasn't around when the alleged violations took place, because that might not look too good to the NCAA. And luckily he didn't burn any bridges down in redneck world so there's no way anyone will want to dig up dirt on him and keep trying to pile it on. And on top of all that, since we have to be squeaky clean for a few years, thank God the first person anyone thinks of when they hear squeaky clean is Lane Kiffin.

When it rains, it pours.

Okay, that didn't sound comforting. There is always the classic circling the wagons!:

Press conference scheduled for this afternoon at 12 pm PST. Well that's what we hear.