Share All sharing options for: Cheatey Petey & The Trogans Become A National Joke

Many thanks to Bruin805 for locating the screenshot of the real Cheatey Petey "response" to the NCAA: 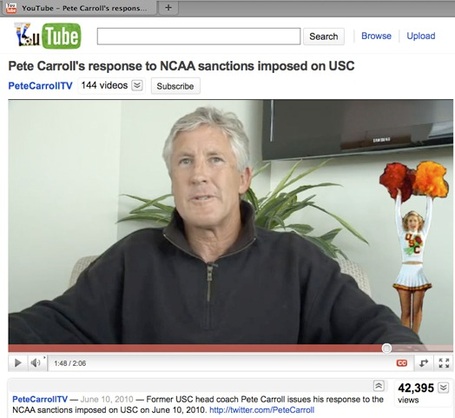 It looks like Cheatey Petey has become a national joke in the NFL. Mike Florio, one of the most prominent commentators in the NFL wrote yesterday that Cheatey should lose his job:

As to Carroll, he should lose his current job. Of course, he won't; Seattle Seahawks president Tod Leiweke hired Carroll at a time when Leiweke knew or with the exercise of due diligence should have known that Carroll presided over a program poised to be slapped silly by the NCAA. And if the Seahawks had no qualms about it then, they should have none now.

And Carroll can disagree all he wants with the findings or the outcome, blaming everyone and anyone but himself for the damage done to the Trojans program. Folks who get it know that Carroll's hands carry a thick veneer of grime. And they in turn recognize that justice won't truly be served until the only coaching Carroll ever does entails holding an Xbox controller.

Florio also wrote that Reggie Bush should be stripped off his Heisman trophy.

Not only the Trogans got  deservedly penalized (although arguably not harsh enough) by the NCAA, it looks like their dumb, tone deaf bluster like what we heard from Carroll, has cemented their status as a national joke. Cheat forever Petey.