Share All sharing options for: Getting to Know CU ...

Hey Bruins Nation!  Let's welcome to the newest member of the Pacific Ten...or Eleven, or whatever we're going to be.  The University of Colorado announced last week that it will accept an invitation to become the eleventh institution to to join our conference, beginning competition in 2012 (Mayans permitting).

As an exile in Colorado, I'd like to introduce BN to our new friends and soon-to-be conference rivals.  I've had a pretty close connection to CU and CU sports since I moved here in 1996.  I spent about 5,000 hours in one year doing a surgery internship at the CU med school, a connection I was thrilled to finish and put behind me. CU football was then coming off a very successful run under previous coach Bill McCartney, and they dominated the college news in Denver.  I also had a sentimental link to their new head coach, a young guy in his first head coaching gig named Rick Neuheisel (more on him later).  So I got tied into CU when I got here, and have been watching and listening to the locals ever since.  Hopefully I can give BN'ers a good preview of our new conference mates, the University of Colorado Buffaloes.

This week, I will introduce the school and the surrounding area.  The next article will focus on the history and current state of the CU athletic program.

Disclaimer: I'm on the record as being against expansion, joining the camp with many distinguished BN geezers, in the hope of one day being both distinguished and a geezer here, too. But I am a purist and a traditionalist.  The round-robin format in the Pac-10 was ideal.  The B(C)S has not solved the problem of naming a consensus national champion in football.  We have mortgaged conference alliances and bowl tie-ins and decades-old rivalries for nothing but money.  I really want to not give a crap about the stupid East Coast and it's neglect of everyone west of, say, Boston College.  But time and economics don't care what I think.

So, since expansion happens, I am glad Larry Scott started with Colorado.  CU will be a good fit for our conference.

The geography fits, CU is a good academic and research oriented institution, and the Buffs have a good athletic tradition, even though some of the teams are currently on the downside.  And selfishly, I'm excited to get to see UCLA play here. Boulder is a much shorter drive for me than Westwood.  Now if we could only get an In-n-Out here...

The University of Colorado at Boulder is the flagship of the publicly funded four-campus CU system (incl Colorado Springs, Denver, and the med school).  The Boulder campus was established in 1876, just before Colorado was accepted for statehood.  A beautiful history of the school is documented here.  The original building, Old Main, is still a prominent part of campus.

Several buildings were added over the next few decades as the campus grew slowly at first.  Efforts were made to preserve a rural Italian architectural theme as the campus grew.  I can attest it really is a very beautiful campus.

Macky Auditorium opened in 1923 as a concert hall and performance center, and bears more than a bit of resemblance to a similar building in Westwood. 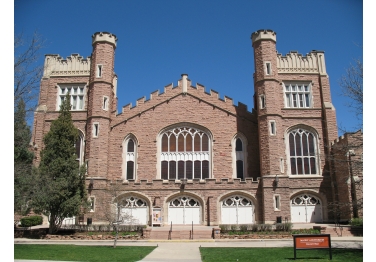 CU officially became the Buffaloes in 1934, following a contest in the school paper.  The official mascot today is Ralphie IV, an real live American bison who storms the field before football games, and Chip, the real live dude in a costume who is seen on the sidelines of games.

A new on-campus(!) stadium was dedicated on Homecoming Day in 1924, and following subsequent renovations and name changes, became Folsom Field.  Named for former CU football coach Fred Folsom, it now holds almost 54,000.  It was the site of KD's first game as UCLA head coach, and unfortunately went the way of many of KD's games.  Hopefully, the Bruins will see better times here in the future.  From personal experience, the CU students that day were not in the least welcoming or cool to Bruins fans, but the older alumni I spoke to after the game were very kind and classy.  And, man, I wish the Rose Bowl were just across Sunset. 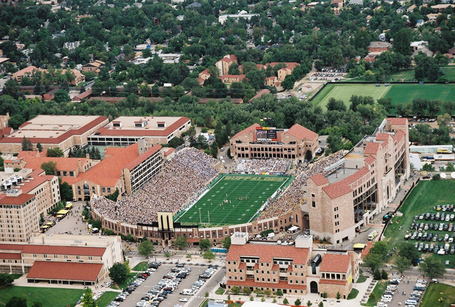 CU now occupies over 750 acres in the center of Boulder, and is home to nearly 40,000 students, faculty, and employees every day (not counting the hordes of meter cops), and is the state's 4th largest employer.

Currently, there are approximately 25,000 undergraduates, and 5,000 graduate students at CU.

Admission to Arts and Science is guaranteed to incoming freshmen who meet certain GPA, class rank, and SAT or ACT scores, something that many UC applicants wish were an option.  This is also something for us to keep in mind when competing for recruits.  The business, engineering, and architectural schools have more applicants than spots, so acceptance is not guaranteed.  The average incoming GPA is about 3.7 with an SAT of 1215.  The admission criteria are here.  Students are on the semester system.  Tuition and on-campus housing for residents is now about $20K, as fees have been rising quickly the last few years due to state budget woes - something else that UCLA and CU sadly have in common.

While CU deserves its reputation as a party school, and certainly enjoys the liberal side of life, this only reflects part of campus life.  CU is also an excellent research university, particularly in the physical sciences. CU is one of 34 members of the prestigious American Association of Universities, which includes UCLA.

So, despite the fragrant "haze" lingering over Boulder, there is a lot of excellent work done there in a wide variety of fields, particularly in science.  From an academic standpoint, CU certainly fits in fine behind Stanford, Cal, and UCLA in the Pac-10.

Located in Boulder, a city we lovingly refer to as 25 square miles surrounded by reality, CU has eclectic surroundings.  Boulder is liberal enough to make Berkeley natives feel at home, and the combo of Boulder and Berkeley is apparently enough to chase Texas A&M to the SEC.  Boulder features great food and lots of culture.   Local highlights include the Pearl Street Mall just north of campus and "The Hill" west of campus.  Boulder sits at the base of the Rocky Mountains and adjacent to the famous Flatirons, which, by local ordinance, are required to be in the background of every photograph taken within city limits. 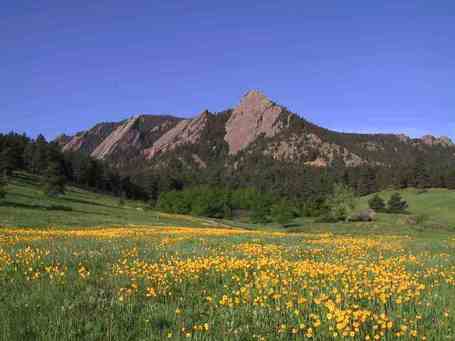 Denver, Ft Collins (home of CSU and the New Belgium and ODell breweries), Rocky Mountain National Park, the gambling towns of Blackhawk and Central City, and world class skiing and rafting are within an hour of Boulder, while world class climbing, hiking, mountain and road biking can be found simply across the street.   So there are plenty of things to distract the undergrads, and plenty of things to attract visitors and lots and lots of Bruins for road trips.

Well, that's a brief intro to our new conference mates, CU Boulder.  I'm sure the folks at Ralphie Report can give us more of an insider's flavor as to life as a Buff.  They run a great blog over there, so I encourage you to check them out and welcome them to the party.  Next time, I'll go a bit into the football and basketball programs, as that is where our main match ups will occur - they can't touch our baseball team (they dropped the program several years ago) and we are no match for them in skiing (they have 17 NCAA titles).

Once again, welcome to the Pac, Buffaloes.  It's great to be living in Pac-10 land again, (and without having to actually move, because I hate that).  Now, if we only had a beach and some Double-Doubles...