Bumped with Savage quotes (via Gold) below the fold. Tough news but we will have to cowboy up instead of feeling sorry for ourselves. GO BRUINS. - N 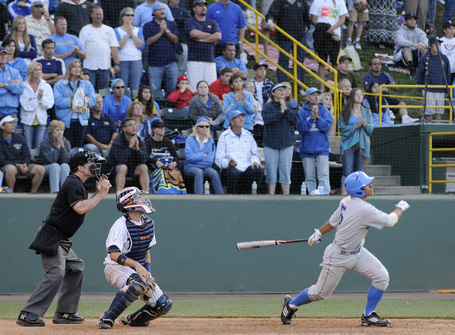 UCLA second baseman - and three-hole hitter - Tyler Rahmatulla suffered a broken right wrist in the team's post-game celebration on Sunday night, and will be out for the College World Series in Omaha.

UCLA's bracket is a tough one, with TCU, Florida and Florida State. The Bruins open with the Gators at 4 p.m. on Saturday.

Teams really need to rethink how they want to be celebrating after a victory.  First, Kendry Morales breaks an ankle after an Angels' victory celebration and now this.  This is obviously a blow, but hopefully our Bruins are able to bring back a championship despite this setback.  Go Bruins!

UPDATE (N): Gold has comments from Savage who found out yesterday:

"I found out about it yesterday afternoon," UCLA head coach John Savage said on Tuesday. "It was bothering him, but I really didn't think it was much, to be quite honest. They X-rayed it, found out it was a broken wrist." [...]

"I just feel terrible for Tyler," Savage said of Rahmatulla, who was batting .328 with a team-leading 52 runs for the season. "I know the team feels really bad for him. We had yesterday off, we'll practice here in a bit and let everyone know it's another setback to deal with. We'll deal with it. We'll handle it."

This a tough blow concerning how Tyler was all locked in recent weeks. Savage will have to figure out ways to adjust, inspire and manage the team:

"We have options, but Tyler has hit third in 61 games," Savage said. "Who's gonna hit third? That's the bigger question. Offensively, we'll have to make some adjustments and put some people in. We were shocked. We have to have a day at least to get to it."

I am sure Ryan will have more on this. Hope Tyler gets better. Hopefully he will come back with an amazing junior year to lead us right back to Omaha. Meanwhile, it is up to his team-mates to rally and get our first win CWS. Time to cowboy up.