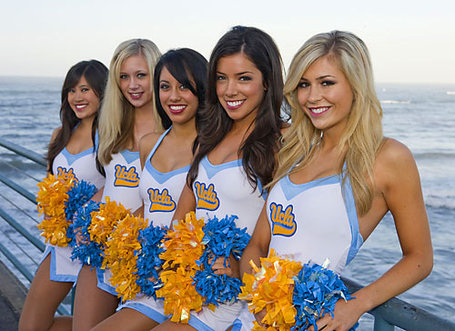 It was five years ago today we launched this little online bar on the interest drenched in Bruin blue gold. Honestly we didn't imagine the kind of growth we have seen in last five years. The numbers are kind of staggering:

If anything they serve up as pretty interesting data points against any assertion of Bruin fans being bunch of fair-weather and bandwagoners. They are really tribute to the entire Bruin Nation, who have been loyal to those four letters despite going through perhaps the most painful decade in the history of our football program. I can only imagine what will take place if Rick Neuheisel gets us back to where we belong in next two seasons. Right now he seems to be on the right track.

Of course our basketball program has been bit of roller coaster last two years, but we still have one of the better coaches in the game guiding the program. Despite having a down year we just experienced another multiple championship winning season with a magical run in the women's college world series. There is also the baseball team in the middle of its own magical run this season and perhaps a long term run as a national power under the current coach.

So what I am saying things are just getting started on BN. Perhaps the most rewarding aspect of coming here everyday is the friendships that have been built over the years and that are in the process of being built. It has been inspiring and amazing, and for that thanks go to everyone for making this a special place. We have an amazing community held together by a wonderful group of frontpagers.

Hope this can continue for another 5 years and well beyond it with or without yours truly.