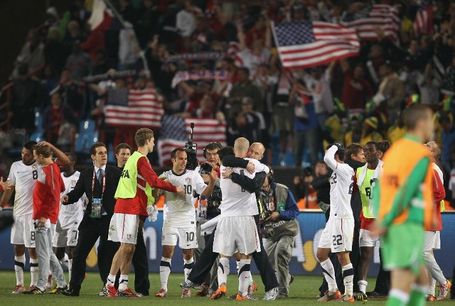 I think I'm still stunned by what happened. A disallowed goal versus Slovenia robs the US of victory and forced them to win versus Algeria if they were to advance out of the group stage. In classic US National Team form, they left it until the dying minutes, when Landon Donovan, who had been listless to that point, came through with an incredible game-winning goal to send the USA through to the Round of 16.

Not only will the Yanks play a Round of 16 match, but they will do so as the winners of Group C, the first time that a United States team has won their group at the World Cup since 1930. By winning the group, the US gets to play the second place team in Group D, one made up of Germany, Ghana, Serbia and Australia. Ghana leads the group with four points, while Germany and Serbia each have three and Australia has one. Those four teams will all be in action at 11:30 am PDT today, with Germany squaring off against Ghana and Serbia playing Australia.

I would also be remiss if I didn't note that all three Bruins on the US roster played a vital role in the match, with Carlos Bocanegra anchoring the defense as captain, Jonathan Bornstein doing surprisingly well at left back and Benny Feilhaber coming off the bench to play a vital role in the second half. So, not only are Americans feeling good, Bruins can feel doubly good. Now we can sit back and enjoy some fun, hopefully positive, soccer. Consider this your World Cup open thread. If you are watching the Group D matches, are looking forward to other matches or want to relive the Yanks' thrilling victory, have at it here.