Of course the Trojan Times is all over this:

Paul Richardson, Shaquille Richardson and Josh Shirley, all incoming freshmen football players at UCLA, have been arrested for felony theft, according to Los Angeles Sheriff reports.

The three were arrested by UCLA police on campus.

Paul Richardson and Shaquille Richardson were released on $20,000 bail. Shirley was released without bail.

Anyway, we will wait to hear full details from UCLA officials including the campus police. Just got the following comment from UCLA athletics:

"We are aware of the situation and we are looking into it. We will have a comment at the appropriate time."

The fact that this news appeared on a day like this is more than disappointing. It is disgraceful.

I sure hope Coach Rick Neuheisel and his staff does lot more than just one game suspension for these young men. Even while the charges are pending, they should not be near any kind of practice field or team facilities. They should be focusing on summer schools and come with adequate explanation if there is any behind these charges.

If there are no adequate explanations beyond "kids being kids" we expect CRN to send a hard message beyond stern words. We expect multiple game suspensions and of course the notice that if there is another mishap they should be kicked off our program. Period.

UPDATE (N): Richardson, Richarson and Shirley! Hey that sounds like a law firm. This Saturday is already shaping up to be a memorable one for all the wrong reasons (including the fact that apparently the UCLA family out in Southern California is in the process of putting together a pathetic showing at Coach's Memorial). BTW Richardsons are cousins.

UPDATE II (N): Chris Foster, the LA Times "beat" reporter for UCLA appears giddy about this development as he is cracking smiley faces on Twitter: 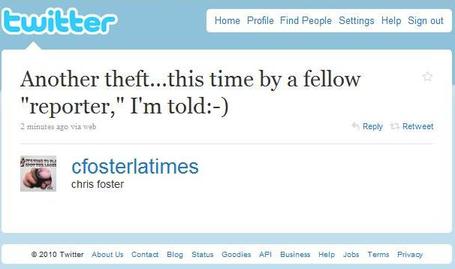 Showing his true colors obviously. What a clown. GO BRUINS.