Here on Bruinsnation, we have all been following CRN and the ongoing story regarding three student athletes' alleged felony charges.  The story has been reported well on this site.  CRN acted decisively and should be respected for doing so.

Of course, not everyone respects forsaking talent for integrity.  In case you missed it, a local "journalist" tweeted strangely in attempt link SUC's sanctions with the alleged acts of UCLA's three incoming athletes. 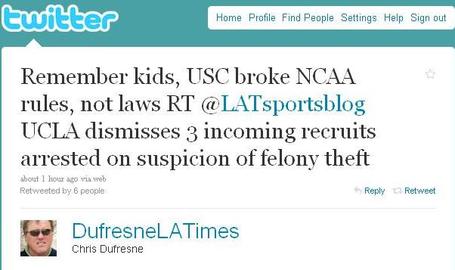 Nestor responded to the tweet here.  Needless to say, there is no logical link between the two events.  Yes, USC was sanctioned for NCAA violations. This is true. Yes, three UCLA student athletes allegedly broke laws. This is also true. However, there is absolutely no logical connection between the two events. None.  Dufresne might as well tweet about a traffic jam and compare it to SUC’s “unfair” penalty.

In fact, Nigel tried to bring up an event that logically related to UCLA’s three athlete’s being charged, ie USC’s list of Student Felon Athletes, as well as compare UCLA's response to the allegation to SUC's:

Chris, I was surprised and disappointed at your Twitter post which seems to take a shot at UCLA athletics while defending the “integrity” of USC athletics. The UCLA football program dismissed the Richardson cousins and Josh Shirley within 72 hours of their alleged theft. Note…they have not been convicted of any crime, yet UCLA football and Coach Neuheisel do not wish to taint the program with any impropriety, choosing to hold their players to a higher standard of being above reproach. USC? Your archives at the Times should easily provide you with enough police blotter information on Rey Maualuga and Frostee Rucker and how the Trojan football program handled their situations.  Do you honestly believe the USC football program is “cleaner” than UCLA’s? I’d be interested in your response, and in fact would like your permission to share your thoughts on a UCLA Bruin fansite. I’d also be interested in an “apology tweet” for that crack if you feel one is warranted. “Nigel” (I used my real name, not my screen name)UCLA ’91

Dufresne wanted no part of Nigel's email.  Instead of logically discussing the differences between UCLA's response and SUC's response, Dufresne gave this canned response:

no, no, no…you bruins are so sensitive… …i was merely pointing out a fact that gets lost in ncaa sanctions and vilification of schools….that rules are different than laws….. USC broke rules, not laws… (now, the IRS vs. Reggie Bush is a separate matter, not pertaining to what the NCAA did to USC).. is felony theft worse than a guy’s parents taking money from an agent? money the player is going to get in six months 10-fold? not to say USC doesn’t deseve what it got…but let’s make distinctions between criminals from rule breakers. there is a difference no matter what the school or the player. chew on that one awhile….im taking no official posiiton…

A while later, he added to his response with this:

UCLA obviously knows the difference between rules and laws because it hired Rick Neuheisel, involved in more than 50 ncaa violations while at colorado. had rick been convicted or accused of a felony you think he’d have been hired? rules are different than laws, back to my main point… rick deserved a chance to coach at UCLA even though he had run afoul of ncaa, right?

The obvious fact after reading Dufresne's responses is that he avoided Nigel's queries all together.  The question is, Why?  Dufresne’s mission is clear: paint a sympathetic portrait of SUC and sell it to his audience. We are clearly not his audience, which Dufresne highlighted by referring to Nigel as “you bruins”. His position does not need to be official for it to be obvious.

We should probably all keep SUC's "official" voice clear.  SUC's appeal of the NCAA's penalties has been well documented both here and on other sites:

“We acknowledge that violations occurred and we take full responsibility for them. However, we sharply disagree with many of the findings in the NCAA Committee on Infractions Report. Further, we feel the penalties imposed are too severe for the violations identified in the report”

We've heard SUC administrators claim that they didn't cheat, we've heard Garret claim that the NCAA is jealous, but the most clear message from South Central has been a cry for sympathy by alleging the penalties are too severe.  When a media outlet's message is eerily similar to SUC's "official" mantra, we need to take note.

Dufresne's position may not be "official", but we all get it.  We are not his audience.  I suggest those who still subscribe to the Times to drop the subscription and let the editor know why- the wrap is biased.