Bumped. I believe this is first post we have featured on the frontpage from our students. To no ones surprise it's Sideout11, who has always been one of the most eloquent representatives of our student body. We hope we will hear more from you in the coming days. GO BRUINS. - N 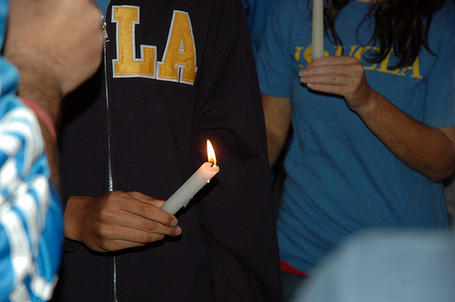 It has been 24 hours now, and just like N and I'm sure many more of you, I am having a lot of trouble putting my thoughts about Coach into words.  I have been sitting here for 5 minutes simply trying to think of a title for this post.  Despite not knowing what to say, I want to get my thoughts and emotions down while they are still raw.  I will be writing stream of consciousness and unedited (something I have never done before), so I apologize if this ends up being a jumbled mess of nothing.

I truly and honestly don't know where to begin, so will just start with last night and see where it takes me.  Well I guess first I should let you know where I'm coming from so that what I say can make more sense.  I am currently a third-year student at UCLA, and have grown up around Bruin Basketball.  I first met Coach Wooden when I was about 7 or 8, though I don't remember it, but was fortunate enough to meet him again twice this last year.

Anyways back to last night.  I was at a banquet where I work when i received the news that he had passed and immediately excused myself to go down to Reagan.  I had already planned on attending the 8-clap, but given the circumstances I wanted to be down there as soon as possible.  You all probably know about the events that took place, but I want to share with you some of the things I experienced.  As I headed from the Hill down Bruin Walk, I ran into a group of about 50 students who were heading down as well, everyone in blue and gold.  Some were sprinting, some jogging, but everyone was walking with great purpose.

At that point I remembered thinking wow.  Here we are in 2010 when some of the students had never even seen John Wooden, and yet hundreds were flocking in unison to honor him.  Once there, I was surrounded by nothing but familiar faces, even though I had never seen many of the people before.  People were embracing yet little was spoken, and I remember one of my friends who is by no means a big sports fan later commenting that she had never felt more apart of the UCLA community.  I guess this is Coach Wooden's first legacy, that he unites people without ever having known them, and will continue to do so. I believe that everyone who attends UCLA has a moment, big or small, a crystallizing moment that embodies what it means to be a student at this university.  in 1975 it was watching John Wooden win his final championship, and 35 years later it will be that same man's passing that I will always remember as the time I felt this community rise up as one.

Now I am here, writing this post.  I had been wondering when I would finally break down and cry, and I though it would be at the memorial service, but I was wrong.  I lost it a few minutes into writing this, and it took me 10 minutes to recompose myself.  I have since cried 3 more times.  And I feel better.  This is surely the beginning of my mourning process, but it has now finally started.

For those of you who feel that you don't know what to say and that in a few more days you will be able to piece all of your thoughts together, I encourage you to write something anyways.  Do it on BN, do it on the back of a napkin, do it in private and then throw it away.  Our emotions for Coach cannot be expressed through words, but they can be released by them as I found out by writing this (and I think I just found my title too).

Once I was afraid of dying,
terrified of ever-lying,
petrified of leaving family, home and friends.

Coach long ago made peace with his looming demise, because it meant a reunion with Nell.  He had already progressed through the poem, while everyone else was still at the top.  We were afraid of him dying because to almost everyone Coach was family or a friend.  Now that he is gone, it is our turn to go step by step, line by line, until we too make peace with the fact that while he may no longer be with us in person, he will always be there in spirit.

Goodbye Coach.  May your journey through heaven be as magical and meaningful as the one you had on Earth, only this time Nelly will be by your side for all eternity.