Bumped. This is a pretty amazing story. If you ever had the chance to meet Coach, this would be a great thread to share that story. As always if you would like to share extended reflections, please share them in our Fanpost section. Thanks GO BRUINS. -N 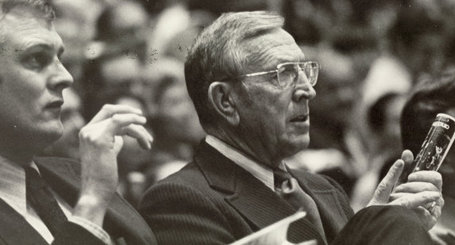 This marks the passing of a true legend. A gentleman in all ways and my definition of a perfect "Mentor and Coach" John Wooden.

One day in the fall of 1960, I was on the campus at UCLA and walking in the hall of the Coach’s Offices and Coach Wooden spotted me and waved for me to come into his office and sit down. Coach Wooden was the legendary basketball coach and I was on the football team. He called me by my first name and said, "Jack come on in and sit down, I want to talk to you for a few minutes." I was somewhat taken aback by his even knowing who I was, let alone knowing me by my first name. I later learned he had a photographic memory and could probably name any athlete anywhere by first and last name.

What impressed me most, was his sincere concern about my interests, my life on and off campus, my classes, my major and my plans for the future. As I sat there responding to his questions I had the feeling he cared about nothing else but me. He had a way of making you feel so special and that he truly cared about me and especially my plans for the future. In reflection, this was one of the most precious moments of my life.

About 30 years later I was working downtown Los Angeles in the investment banking business and after leaving my office and walking towards the parking lot to my car, I passed in front of a hotel and noticed a sidewalk sign that said UCLA Bruin Bench Meeting, Guest Speaker: John Wooden. I couldn’t resist going in and see if I could attend the meeting. As I approached the door, there stood John Wooden, the legend himself, standing there greeting every guest as he approached. Keep in mind it has been at least 30 years since I had my personal encounter with Coach Wooden, and as soon as he saw me approaching he said, "Jack how are you and how have you been?"

It was like a day hadn’t passed since that day in his office and this feeling came over me that was nearly overwhelming. I thought my heart would burst out of my chest. It was as though our lives had never skipped a beat. What a treat that evening was and again one of the most precious and memorable events in my life.

In retrospect, what I gained more than anything from John Wooden is learning the importance of having a mentor in your life. I have been blessed by having had a few who have added significantly to my life but none had the impact like the legendary Coach Johnny Wooden even though it was just one brief encounter, I will always remember him as the perfect "Mentor & Coach".

In future posts, I will reflect on other Mentors who have impacted my life and why I think having a mentor, can change your life for the better.

May you be healthy and prosper.