I had a personal experience with Coach Wooden that I would like to share with Bruins Nation, because it shows what kind of a person Coach Wooden was. It stemmed from a rather unfortunate experience I had, but because of Coach Wooden it had for me a very happy ending. 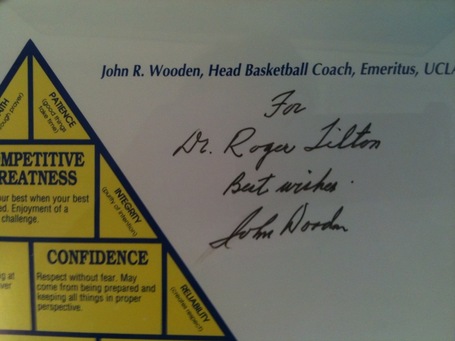 First as a little bit of background. I was fortunate enough to have been a student at UCLA from 1966-1971 right in the middle of Coach Wooden's great run.  Because of him I am one of only a handful of people who can say they attended a school that won the national championship in basketball every one of their undergraduate years. Also I was lucky to remain close to UCLA basketball even after I graduated.  While I was attending graduate school (not at UCLA) I lived at 515 Gayley Ave. in what was then the defunct ATO house where they rented out rooms.  My next door neighbor was Bill Walton and Pete Tirgovich a starter on the 1975 national championship team lived upstairs.  I even played on our summer intramural team in Pauley in 1974, and we were coached by Andre McCarter who was the starting point guard on the 1975 team.  (I once got to shoot baskets with Pete Tirgovich at Dykstra Hall.  You don't realize how good these guys are, because they are playing against players of their calibre.  Just shooting around I don't even remember him missing a shot).

In 2005 a friend asked me if I wanted to attend a UCLA basketball game something I had not done in years.  He got the seats from a friend, and I couldn't believe how good they were right behind the UCLA bench about three rows up.  Just before the game I saw Lute Olsen (they were playing Arizona) walking right towards our seats.  I looked, and he had his arm around Coach Wooden who was sitting just one row in front of us and to the right.  I resolved that I would get Coach's autograph and at the next time out I asked him if he would sign the back of one of my business cards.  He signed it "John Wooden, UCLA" and shook my hand.

One night eight months later I drove into my garage around midnight and when I got out of my car a guy started hitting me.  Before I knew it I was on the ground with him hitting me in the face and an accomplice standing there watching.  I didn't understand why this was happening and thought that maybe he was trying to kill me.  But then in a flash they were gone speeding away in a car with another accomplice.  Then I noticed that my wallet was gone and realized that it had been a mugging/robbery.  What had happened is that I had just gone to the ATM (a big mistake), and they had followed me to my condo to escape the cameras at the bank.

Fortunately I wasn't badly hurt other than a sore nose and a floater in my eye that I no longer notice.  Two days later I met someone who was an avid sports fan and thought I would show him my card with Coach Wooden's autograph.  Then it hit me that I had lost it, since I carried it in the wallet that had been stolen.  This was something irreplaceable that I could never get back, and I felt really terrible about it.  I talked to a friend about it, and he told me that Coach Wooden's address was public knowledge and that people actually had written to him.  He then found out Coach's address and  e-mailed it to me.  So now at least there was some hope, although I found it hard to believe that he would actually respond if I wrote to him and even less so given that he was now 95 years old.

I wrote Coach Wooden a letter explaining what had happened and how I had been mugged and that the biggest loss was losing my autographed card.  I enclosed another business card and asked if he could sign the back of it to replace the one that had been lost.  I mailed my letter and the business card to him on Monday express mail with a return envelope for him to return the signed card.  Much to my amazement on Friday I received the return envelope from Coach Wooden.  Not only did he sign my business card but also included another signed card which included his pyramid of success, a third card of him and his father, and in addition a full size copy of the Pyramid of Success.  The original lost card just had his signature, but every one of these four items was personally addressed to me along with his signature.  Amazing!

I got the Pyramid of Success  framed,  and it will forever hang in my office: 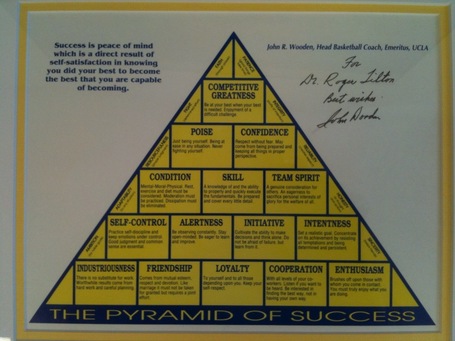 One card will always be carried in my wallet and another kept in a safe place.  I gave the card of Coach Wooden and his father to my friend who sent me Coach's address, and it is something he will always cherish.  This was a great man. Nothing more needs to be said.