While Rick Neuheisel is having a busy day - ringing the opening bell at NASDAQ, traveling out to ESPN's mothership in Bristol CT, and then traveling back to LA for another media day at the Rose Bowl - UCLA has been  busy getting official info. ready for the upcoming season.

The 2010 UCLA Football Media Guide, a book we all look forward to every year was officially released today: 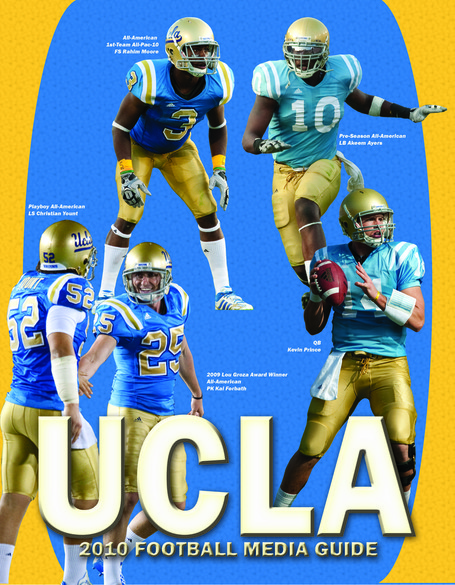 You can download it (PDF) by going over to the official site. I will post some excerpt on "2010 outlook" after the jump. Before I flip over though, note that Rick Neuheisel is going to be appearing on ESPN's College Football Live for the entire half hour today at 12:30 pm PST/3:30 pm PST. Here is the kicker. Hello Kiffin is going to be on the show with him. BTW we have been posting lot of this kind of updates on our Twitter account, which you can follow here.

So, we will make this post an open thread for those who are watching the show (because I am sure many would love to get live updates on what is coming out of Hello Kiffin's mouth).  Jumping over the flip with notes from the media guide which includes a fresh depth chart heading into Fall camp.

The Bruins begin the third season of the Rick Neuheisel Era having closed out the 2009 campaign by winning four of their last five games, including a victory in the EagleBank Bowl. They enter the 2010 season with the coaching staff virtually intact and a third straight Top Ten recruiting class. A total of 42 lettermen, including 12 positional starters and the best kicking tandem in the nation, give Neuheisel and his staff reason for optimism heading towards the Sept. 4 opener at Kansas State.

"I expect us to continue to build on the growth and progress we made on offense a year ago," said the Bruin head coach. "Most of our young players have now gained starting experience and are entering the third year of our system. That experience, combined with their continuity in the system, leads us to believe we are ready to take a step forward offensively, especially in the area of the big play. With all that said, I expect there to be great competition at virtually every position on a daily basis and it will be fun to watch us continue to develop as a unit."

"Defensively, we lost some important contributors but we are excited about our returning nucleus of starters and young talent. We were pleased with their overall development during Spring Practice. Our staff on this side of the ball will continue to tweak our system to fit the strengths of our players. In addition, we have made great strides in speed and strength due to our recruiting and off-season conditioning."

"When it comes to special teams, no team has a better pair of kickers than Kai Forbath and Jeff Locke. We have made great strides in our coverage units and we will be looking to solidify our kick returning position during the Fall."

Offensively, UCLA returns players with starting experience at nine of the eleven positions. Quarterback Kevin Prince started 11 games and threw for over 2,000 yards in his first season on the field. The top two wide receivers in terms of receptions and receiving yards -- Taylor Embree (45 for 608 yards) and Nelson Rosario (42 for 723 yards) -- are also back, as is tight end Cory Harkey, who started four games. Last season's top two rushers, Johnathan Franklin, a starter in eight games who totaled 566 yards on the ground, and Derrick Coleman, who ran for 244 yards, are both set to return. Four starters along the offensive line also return -- left guard Jeff Baca, center Kai Maiava, right guard Eddie Williams and right tackle Mike Harris. The coaches will look at several other talented players to help complete the puzzle.

Defensively, UCLA returns five starters, plus a 2008 starter and several other key performers from a unit that ranked near the top of the Pac-10 in pass defense, total defense and scoring defense. All-America free safety Rahim Moore, who led the nation with 10 interceptions, and outside linebacker Akeem Ayers, who scored three defensive touchdowns, are the leaders of this group. UCLA returns three players who started a majority of the games in the secondary - Moore, strong safety Tony Dye and cornerback Sheldon Price - and another cornerback, Aaron Hester, who won the starting job but played in just two games due to injury. End Datone Jones, who made 11 tackles for loss, is the leader on the line. Several talented youngsters will compete for open spots and playing time this Fall.

On special teams, Forbath led the nation in field goals per game (2.15/g), won the Lou Groza Award and earned consensus All-America honors. Jeff Locke ranked second in the Pac-10 in punting and was the only freshman among the semifinalists for the Ray Guy Award. Christian Yount was the first-ever long snapper named to the Playboy pre-season All-America team.

Lot more over here, which includes a fresh depth chart and the latest roster. Here are my notes from it (on page 66):

A document like this is a must read for incoming UCLA freshman and students, who are just getting into Bruin football. It's something everyone here should browse through anyway because it will make our discussions during this upcoming football season that much more informative, knowledgeable and more importantly enjoyable who live and breathe UCLA football.

If there are other specific details (especially from the depth chart) that stood out to you please let us know. Let's use this as an open thread tracking Neuheisel's appearance on ESPN later today and also to go over the details in the media guide.

UPDATE (N): Looks like there were little mistakes in the original depth chart. UCLA has updated it with a new one that shows Connor Bradford at tackle (not TE). It also shows Franklin/Coleman essentially tied at TB rotation and also the same situation at F Back. Note Justin Edison is now listed as a starter at DT, which is interesting. Perhaps, the "or" was there before but I totally missed it. My bad in that case. Also note, incoming freshman don't get to be listed on depth chart until coaches see them during Fall practices. Lastly, you can also check out a great slide show on the media guide here. GO BRUINS.