Unless you’ve seen it live, the F-Back is something that is kind of cloudy on the internet. I’ll try to clear up the picture for you.

Let’s take a step back: the F-Back isn’t something that is unique to UCLA; well, the name is, but the concept of a hybrid receiver/tight end is something that has been around for quite some time. The name "H-Back" might seem familiar to you.

The H-Back name is a really crude way to describe the F Back position, but it’s a suitable comparison for the time being. An H-Back is similar to an F-Back in its nature, but different in the sense that the H-Back is a cross between a receiving tight end and a full back rather than a tight end and receiver.

So back to the point: What is an F-Back?

An F-Back is a hybrid skill position resembling a cross between a Wide Receiver and a Tight End. An F-Back feeds off of seemingly complex and tricky offensive sets to get to the open spots on the field easily.

Why don’t more teams use the F-Back? Simple, you need freak athletes to use this position effectively; you need guys that are quick enough to run with safeties and corners, but are big enough to take on linebackers. Luckily, UCLA has those athletes in guys like Morrell Presley, Anthony Barr, and Christian Ramirez.

Quite literally, F-Backs can do anything. They have the ability to run, block, and catch, even make a sandwich while they’re at it (corny enough huh?)

These concepts, although very, very, very broad, should suit proper for the F-Back this year:

I’ll cover those key concepts that the F-Backs will be involved in, and talk a little bit about other possibilities... after the jump

All Photos and Videos collected by Chris from SmartFootball.com CHECK IT OUT

By no means are we going to run any Percy Harvin counter plays, just watch the H-Back on this play.

A diagram of the previous play: 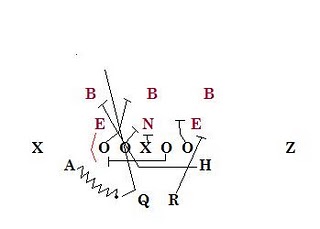 The F-Back can be easily classified as a temporary lead blocker, someone that will attract attention on one side, and run to the other. The real hole comes from the pulling guard, but is helped out by the F-Back coming through the hole, expect this concept to be extremely limited, but I wouldn’t be surprised to see a little blocking from the F-Back.

One of my favorite things to do while watching football on the TV is tune in to an Airraid Offense, mostly because of this play. The F-Back will be so lethal in the intermediate passing game because of this concept:

This play concept is so valuable to an athletic player, so keep an eye out for those quick hitch passes in the middle of coverages. I crossed out "play" because I expect that Norm Chow hasn’t gone mental and won’t be putting Kevin Prince into an Airraid offense; the Stick Concept is used in every type of formation/offense, including the Pistol Revolver.

The Seam Concept is something that is fairly loose, so I’ll explain it only in one context; the Levels Play. I’ll avoid all of the different reads and junk for the different receivers, and just stick to the F-Back.

What is "MOFO"? MOFO stands for "Middle-of-Field-Open." That means go up field, and go where the safety is not going. The seam pass is something that is really difficult to cover in Cover 2, and nearly impossible to cover in man (just check out Jahvid Best vs. Bosworth.. forgot which one got burned) with the F-Back going upfield against a linebacker.

By the way, this play isn’t necessarily designed for the F-Back, but it can show you how deadly it can be when the F-Back can attract attention from the Safety and Linebackers

You’ll need to watch this video several times to notice everything that is going on. Try to watch Receiver by Receiver, and then you’ll get the idea. (SB Nation has problems with GIF files for play diagrams, so I apologize for not making it simpler for you). Make sure you keep an eye out for the Tight End (prospective F-Back) running the streak up the middle.

**WARNING** This part of the program includes USC Highlights, proceed at your own risk.

The West Coast Offense will still have its grasp on the Revolver Offense, and the F-Back will be a major part of that concept. One of the biggest staples of the West Coast Offense is the Play Action Bootleg play. Normally, a tight end will leak into the flats (remember all of Ryan Moya’s touchdowns?) and the QB will get it to him from a foot away. USC just happens to be one of the best teams in the nation at running this play, so they can’t demonstrate it any better than this:

Expect plenty of those passes during the upcoming season.

With the adaptation of the F-Back, it would seem as if Norm Chow is finally publicly showing some of his true ingenuity using all of the possible concepts from every corner of the football world to feed his talent stocked skill player bank. With the all-purpose F-Back, and the adaptation of the Revolver offense, expect UCLA’s offense to look a lot more lively this season.