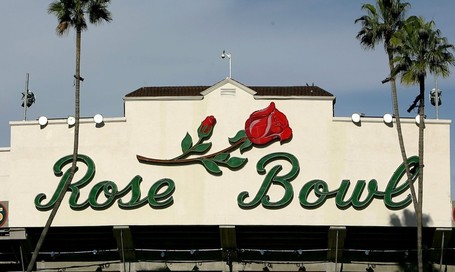 Happy 2011, BruinsNation.  May this year bring peace and happiness to you and yours.  And a New Year's Bowl game for UCLA next season would be ok, too.

Well, except for the Orange Bowl, and the Sugar Bowl, and the Cotton Bowl, all of which were formerly Jan 1 games, but which now draw (more) attention to themselves by playing in the days after New Year's.  There are also some other unnecessary bowls prior to the B(C)S Game when Oregon and Auburn will battle for a non playoff-based arbitrary championship and cap the college football season on Jan 10.

Well, we still have 6 games today who haven't surrendered all semblance of tradition and integrity, so let's focus on those.  Once again, a few bowls are named only for their sponsor, so those games will again be numbered.  Today's matchups and previews after the jump...

The First NYD Bowl pits Northwestern (7-5) against Texas Tech (7-5) at Noon EST on ESPNU.  Northwestern last won a bowl game in 1949.  It wasn't televised, partly because TVs, electricity, and football itself weren't yet invented.  Well, maybe that's an exaggeration, but that's still a very long time.  That drought is not likely to end this year.  The Wildcats lost their All-Conf QB to an Achilles tear in mid November and were promptly drubbed in their final 2 games.  Meanwhile, the prolific TTU passing offense was 8th in the country this year in passing yds/game, and puts up over 32 points a game.  These are teams currently going in opposite directions.  Consider the last 2 games for each side: Northwestern gave up 108 points in 2 losses, and Texas Tech scored 99 in 2 wins.  Sorry, Northwestern.  But just look how far TV technology has come (and thank god).

The Next NYD Bowl matches #9 Michigan St (11-1) and #16 Alabama (9-3) at 1pm EST on tWWL Michigan St tied with Wisconsin and Ohio St for the Big 10, err...11, well, really 12, but still 10 championship, but only got the consolation prize of a non BCS bowl, and then got the booby prize of facing Alabama, who was a few minutes away from beating Auburn and having a shot at repeating its national title from last season.  But don't worry MSU, next year you can be a Leader (or is it a Legend?) and you won't have to worry about whether the conference has enough participation ribbons for all its teams.  You can just play for the title on the field (are you listening, NCAA?).  Alabama led the SEC in defense, including giving up a miserly 34 rushing yds a game.  Alabama is tied with *$c for most bowl victories at 31, which alone is enough for me to say, "Roll Tide!"

In the Outback Bowl Florida (7-5) takes on Penn St (7-5) at 1pm EST on ABC.  Yes, I know Outback is a corporate sponsor, but I do love those Bloomin' Onions.  That's 2210 calories of spicy deep fried greatness there.  As for the game, we will see a matchup between Florida coach Urban Meyer, who will voluntarily step down after the bowl (family time, health issues, misses Tebow, 5 losses - you pick why) and Penn St coach Joe Paterno, who was already past the drinking age when Northwestern last won a bowl game and became the Penn St head coach when Urban Meyer was 2, and who seemingly will never step down (perhaps in fear of breaking a hip).  These two iconic programs have met twice on NYD with Florida winning both.  Meyer's farewell should be inspiration enough for Florida to do it again.  Penn St will get another 15 or 20 tries at Florida again before JoePa hangs 'em up.

The Gator Bowl will see Michigan (7-5) and #21 Mississippi St (8-4) duke it out at 1:30 EST on tWWL2.  A Tale of Two Coaches: Miss St's Dan Mullen's coaching prospects are red hot.  He was considered for several high profile vacancies before Miss St locked him up with a big multi-million$$/year extension.  Michigan's Rich Rodriguez's coaching seat is red hot.  His future, and Michigan fan's hopes, ride on the Wolverines' one man gang, QB Denard Robinson.  His ability to stay healthy is critical as backup Tate Forcier is academically ineligible (which actually means something at Michigan).  In the end though, the Wolverine defense is porous, especially against the run, and the Bulldogs' offense is well suited to take advantage.  Also, the Wolverines were 0-4 against ranked teams this season. This may spell doom for the Michigan faithful, whose capacity for self-loathing and suffering rivals our own lately.  On the bright side, if RichRod does lose his job, both Michigan and UCLA fans will join to happily welcome Jim Harbaugh to Ann Arbor.

The Grandaddy of Them All, #3 TCU (12-0) and the #5 Wisconsin Badgers (11-1) meet in the 97th Rose Bowl at 5 EST on tWWL  Did someone say Badgers?  Well, at least they are a Big 10, err...11, well, really 12, but still 10 team, and therefore belong in this game, which is more than I can say for TCU.  Sure, TCU is undefeated, has the nation's best defense, and had they played in an AQ conference could be playing in the championship game.  But politics forced the Rose Bowl to pick TCU over Pac-10 Stanford, so here we are.  Having said that, I wouldn't be that surprised to see the Horned Frog's D shut down a Badger offense that put up 70 three times this year.  But in the name of tradition and integrity and keeping certain things sacred, The Rose Bowl, sorry, make that The Rose Bowl Presented by AT&T, Sony, Citi, Vizio, should ALWAYS be between the Big 10, err...11, well, 12...oh hell, you know what I mean - their conference Leader - unless it's their Legend...or whatever, and the Pac 10, err...12, champion, either North or South.  You know, for tradition.  For integrity.   Aw, screw it.  Badger.

The Fiesta Bowl features UConn (8-4) and #7 Oklahoma (11-2) at 8:30 EST on tWWL.  How UConn rebounds from its historic and heartbreaking loss to Stanford that ended its 90 game win streak should be very intrig...wait...what?  This is football?  What? UConn plays football?  Really?  The fact that the Big East still gets an automatic BCS berth is proof the BCS is stupid and a fraud and East Coast biased and must be destroyed immediately.  Still, this is UConn's 4th consecutive bowl, so they actually do play the game pretty well.  Unfortunately for the Huskies, Oklahoma plays the game quite well, too.  The Sooners are playing in their 12th consecutive bowl.  Of course, they have also lost 5 BCS bowls in a row during that stretch, so UConn shouldn't count itself out, even though I do.

Here is your New Year's Day Bowl game open thread.  Have at it, and have a wonderful 2011, Bruins Nation.