In light of the recent firing of Arizona football head coach Mike Stoops after a 1-5 start, Garlic Joe sat down with UCLA Athletic Director Dan Guerrero to discuss the intricacies of hiring and firing head coaches in the ever more competitive college sports landscape.  Below is a transcript of the interview.

Garlic Joe:  Mr. Guerrero, thank you for taking the time to sit down with me, I am sure you have a busy schedule.

Dan Guerrero:  My pleasure Joe, although you will have to buy our Administrative Assistant Pat a gift since I can’t attend the birthday party in the office cafeteria right now. Say…what’s that smell?

GJ:  I don’t smell anything.  Anyway, I am sure you are aware of the firing of Mike Stoops.  What are your thoughts on that?

DG:  It’s an unfortunate situation. It seemed like Mike was doing a lot of good things out in Tucson, but clearly college football has become an ultra-competitive landscape.

GJ:  Well, he did start the season 1-5 and had a 10 game losing streak.  Were you referring to recruiting?

DG:  Oh I don’t know anything about that.  It just seemed like he was about to turn the corner.   I hate corners.  I used to stand in them a lot when I was a kid.

GJ:  But their next game is against UCLA.  Did you think they would beat UCLA and turn their season around?

DG:  Is that this weekend?  I think I have a golf game with Albert [Carnesale].

GJ:  No, next Thursday.  Isn’t Gene Block Chancellor now? Never mind.  I think what I’d like to touch on is your decision process when it comes to making head coaching changes.

DG:  Well the first thing you need to know is that it is not just my process.  It’s a committee.  We’re all deciders.

DG:  Bob was very ambitious and did good things on the football field.  I can’t say the same thing about his table manners.

DG:  Bob chewed with his mouth open and talked while he was chewing too.  He once hit me in the eye with a corn kernel.  I’m sure you’ve seen him.  It’s not an attractive scene.

GJ:  So…he was let go because of that?

DG:  You can’t get many donations that way.  Especially when you have all your lunch meetings at the Golden Dragon all you can eat buffet.  Bob wouldn’t meet anywhere else.  That, and he spilled soy sauce on Albert’s pants.

GJ:  OK…so…how did Karl Dorrell come into the picture?  Did you use a search firm?

DG:  We actually used two.  One recommended Mike Riley, who was my choice, and the other recommended Karl.

GJ:  Which firm was that?

DG:  Vandelay Industries.  Their chairman Art Vandelay is the best evaluator of talent we know.

GJ:  Rumor is that Chancellor Carnesale liked Karl Dorrell because he looked sharp in his suit.  Is that true?

DG [chuckling]:  Karl looked great in his suit, but what was most impressive was that he used the knife in his right hand and the fork in his left hand.  Also, there was a birthday party at the table next to us at the restaurant.  He didn’t even hesitate, he walked over and wished the person a happy birthday.

GJ:  Interesting.  It looked like Karl was headed in the right direction but he never seemed to get over the hump.

DG:  Well, it’s all about corners.  He turned the corner every year, so he ended up in the same spot after four years.

GJ:  So what caused you to make a change?

DG:  Me?  I didn’t want to make a change!  I wanted to ride that wave, we were doing fine!

GJ:  Who made the decision then? 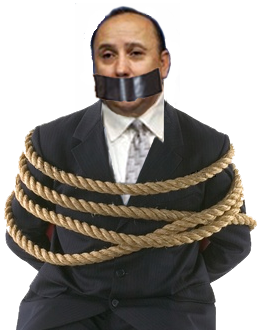 GJ:  You were kidnapped?  Did anyone report it to the authorities?

DG:  No one noticed.  I managed to escape but the firing had already occurred.  They were set to hire some no-name called Harbor or apparently someone from the cast of Golden Girls.  Can you imagine the disaster?

DG:  Luckily, I stepped in just in time to bring in someone forgotten by most but with solid credentials and experience.  And he came at a bargain!

GJ:  Right.  So you went with Rick Neuheisel, the MVP from the Rose Bowl who incidentally played with Karl Dorrell.

DG:  That was a coup.  Name recognition PLUS savings.  It’s what makes UCLA unique.

GJ:  There have been rumblings about Neuheisel.  Some are clamoring for Urban Meyer.

DG:  I never understood that.  Isn’t every mayor urban?  It seems redundant to say urban mayor.  Anyway, we did receive a nice $100 million donation for the Urban Meyer fund.  It was somewhat embarrassing to see a Bruin have such a glaring spelling mistake, but we didn’t say anything, it was a lot of money.

GJ:  So you now have a fund that you can use to hire Urban Meyer?

DG:  What?  I’m sorry I don’t understand.  We forwarded the funds to the rightful department and they have a nice building now.

GJ:  I…don’t…in any case, have you spoken to Rick recently?  How does he feel about his hot seat?

DG:  Right behind the corner, about to turn it.

GJ:  And Neuheisel is confident?

DG:  Sure!  He was just here the other day, gave me a nice serenade with his guitar.  The words were very deep and touching.  They even asked him to sing it in a movie:

GJ:  OK.  It does seem however that many people are suggesting a coaching change.  Have you given it any thought?

DG:  Not really but we always listen.  And at UCLA, everyone has a voice.  Why, just today, an English professor suggested we hire Stoops.

DG:  He didn't say.  It doesn't really matter, it's a philosophical and reasoned choice based on literature.

GJ:  Well Bob Stoops is one of the premier coaches in the country, but Mike Stoops was just fired.

DG:  It's irrelevant, it's based on a book, "Stoops to conquer" or something.  It's a good suggestion if you ask me.

GJ:  Right...well, let’s switch gears a bit then.  How is basketball going?

GJ:  You seem a bit tense.  Any worries for the season?

GJ:  You are scared that he will not perform?

DG:  No, he just scares me in person.

GJ:  That seems strange.  How did you end up hiring him then?

DG:  He just showed up in my office, scowled at me with his hands up in the air in a very defensive position, and screamed "HIRE, HIRE!" 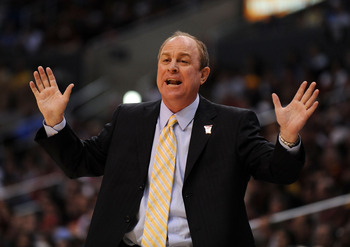 GJ:  He, uhm, does seem intense during games.

DG:  Then he walked over to my desk, took my pack of gum and left.  I hired him the next day.

GJ:  I guess that worked out for you.

DG:  Yes.  We’re quite close now.  He even uses my personal bathroom here in the office on occasion.  Sometimes during meetings.

GJ:  Right.  Well, thank you for your time and good luck.

DG:  You are welcome!