Share All sharing options for: 45 Years of UCLA Football - A Dark Prognosis for the 2011 Team

I have been working on this post for a couple of weeks, before the Thursday debacle.  I wanted to go back as far as I could to see what kind of teams UCLA football has fielded over the years, and the coaches involved, to see if I could find a trend among our successful teams in the past.  Well I definitely found a trend.  And if you had any inkling of hope for the remainder of the season, I am sorry to say that this post will squash it for you.

Thursday night's game was a tipping point, and what we got was an unmitigated, disgusting, wretched and unacceptable performance that shows how bad this team truly is.  Ironically, it shouldn't have been unexpected, based on the trends I will show below, and after 7 games there is undeniable evidence that the Neuheisel coaching tenure must sadly come to an end along with that of the guy who hired him.

Have you ever noticed that you need to go to at least a dozen different sites to get some historical information on UCLA football?  The media guide is actually a really useful tool in that respect, but it could still be better.

I went back and tried to put together the UCLA coaching staff for the last 45 years.  Essentially I started with the arrival of Tommy Prothro in 1965.  As you can imagine, it is pretty hard to figure out who the assistant coaches were, basically until Terry Donahue took over. If you can fill out any of the missing info, let me know!  In any case, I limited the research to just Offensive Coordinators and Defensive Coordinators.  That was just the historical information part.

After that, I took a lot of data from the media guide, namely the following:

Now, this goes back 45 years.  LVBruin put up a great post trying to figure out the biggest contributor to a team’s winning percentage.  As his findings show, points per game seems to have the biggest positive effect on winning percentage, with QB rating being a surprisingly important factor.  If I’m not mistaken, that was based on data from 2010 only, but pertains to all teams in college football.

Well, I went back and used another measure, limited only to UCLA.  Follow me after the jump.

Obviously, it would take forever to do this exercise for all teams for the last 45 years, so I used only the UCLA data.  This is what I found:

A few other things stand out:

Now remember, this is only true for UCLA, in the past 45 years.  The inherent flaw here is that there have been many different coaches since 1965, but the chart below is quite telling: 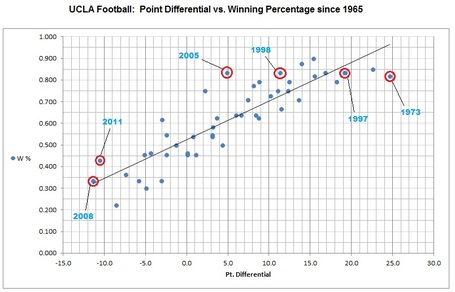 The chart should be pretty easy to read.  The dots are actual data from the last 45 years, namely the point differential per game plotted against the winning percentage for that season.  The straight line is the "best fit" line, which shows the expected winning percentage for a given point differential. So, for example, historically, if UCLA allows as many points as it scores (i.e., a Pt. Differential of 0.0), it pretty much ends up with a .500 record.  No brainer right?  So any point above the line shows an overachieving team, and a point below shows an underachieving team.

Now, I have pointed out a few data points on the chart.  One is from the 2005 season, where our record was much better than would otherwise be expected from the point differential.  Yup, we know what season that was, Dorrell’s mirage 10-2 season.  There are a couple from Cade’s 10-2 seasons, and as most of us surmised, even though the 1998 team was close to the championship, the 1997 team was the better one.

UCLA's best team in this span seems to have been the 1973 team, which I describe in more detail below, but unlike the 1997 team, its losses were not close.  I will let our resident geezers tell you more about that team too.

The other two data points are the damning ones.  The single worst team, in terms of Point Differential, is Neuheisel's 2008 team.  We all know the horrific performance that year, but there were several mitigating circumstances in Neu's first season.

The second worst team, is the current 2011 team, which after 7 games allows on average 10.6 pts more than it scores.  It is clear from the graph that UCLA has won more games than you would expect from our point differential, but as I showed above, offense can help you avoid losses, and this year's offense has been "better".

Of course, you can point to the issue of different coaches, etc.  But do this:  since Rick Neuheisel took over at UCLA, the average point differential is -6.1/game.  Now, go and look where that plots on the graph.  And here’s the beauty:  Neuheisel is 18-26 (.409) in that span.  Do you see what I’m saying?  The straight line is the predicted winning percentage, and based on the point differential Neuheisel’s record falls right on it.

What does this all mean?  It means that, based on the current point differential, our winning percentage should be roughly 0.333, which translates into yet another 4-8 season.  There will be no magical turnaround, and even if there is, it won't matter.  Rick Neuheisel is essentially done at UCLA, and Dan Guerrero should follow him out the door.

Just FYI, based on the chart, UCLA theoretically needs a point differential of 25 to finish undefeated.  Of course this is all just statistical and applies only to UCLA.  Every team will have its own line and correlation.  For example Auburn last year had a 18.2 pts/game differential but still went undefeated and won the championship, probably because they scored 42.7 pts/game.  If they are historically like UCLA, a good offense helps you get more wins.

A few more fun facts from the data I gathered:

The two teams that stand out here are the previously discussed 1973 team coached by Pepper Rodgers with Mark Harmon and John Sciarra as QBs (9-2), and the 1997 team coached by Bob Toledo with Cade McNown at QB (10-2).  That 1997 team…so close in those first two losses.  The 1973 team lost its first game 13-40 to Nebraska, and its last game 13-23 to U$C thus missing a chance to go to the Rose Bowl (the Trogans got pounded by Woody Hayes and Ohio State, 42-21).  Incredibly, that UCLA team didn't get to go to a bowl game!

Now for the ugly side:

Ouch…Rick Neuheisel owns 6 out of 15 of these...and the 2011 team is on here twice.  After 7 games, it is pretty clear what kind of team this is.  I don't believe in magical turnarounds.  Do you?  I'll let another Bruin chime in: