Sometimes it just feels like Dan Guerrero and his folks in the Morgan Center are just trying to show us how incompetent they are. This time around, it's just Dan all by himself and it comes in the form of a "blog." Yup, Danny is blogging now, although to call what he's doing blogging is insulting to every blogger in his mother's basement still convinced that message boards are the wave of the future.

As you can see below, Guerrero has decided that he's going to write something weekly where he gives us "the opportunity to view the goings-on of the UCLA athletic department." When you actually read the "blog," you see that the entirety of this "blog" is his telling us our football team is playing at home this weekend, the non-revenue sports are pretty good, we can't break contracts on where to play basketball home games and some boring talk about conference expansion that says absolutely nothing. 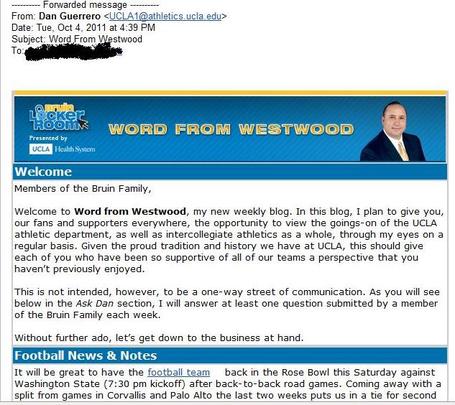 Guerrero decides that allowing people to ask him questions and his choosing at least one a week is a two-way line of communication. Does he really think that that is going to pass? If Dan really thinks that's going to pass as "communication" then he must think we're all as dumb as his buddies at the NCAA. If you want true communication, Dan, sit up in front of a group of alumni, students and fans and allow them to ask you questions. Don't pick and choose questions, one or two a week, and call that communication. That's as laughable as when he had a "Q&A" with himself.

This entire attempt at "blogging" is a complete joke. He told us little that we couldn't gather with basic logic or a glance at the official site. There is nothing in here worthwhile. It's not a blog and it's not communication. It is wasted filler space and another thing that the Morgan Center has failed at, but is this really a surprise?

The Morgan Center has failed to effectively use new forms of media for years now and they are finally beginning to find their way into Twitter, Facebook, video and the rest, but the issue for the Morgan Center is less the tools available to them than it is how they use them. They lack vision and an idea for what they are trying to get out of using these tools. What are they trying to accomplish? They're not furthering the brand or engaging the community to strengthen bonds to the school. They are not doing anything that would attract eyeballs or providing any interesting insight. So tell me, what is the Morgan Center trying to do with any sort of blog or tweet or video or anything remotely new?

Lost in all of this is the one true issue. What they do with videos or blogs or whatever else does not matter if basketball, and especially football, are losing. Keep losing and showing no desire to have a top notch football program and nobody will care about UCLA athletics. Nobody will care about your tweets, videos, blogs or Dan's conversations with himself. You can actually do a good job with that stuff, instead of more garbage like this "blog," and still no one will care. Get to winning.