Once again, when it comes to UCLA's football uniforms, Chianti Dan and his team of hapless fools in the Athletic Department have completely failed again.  As Achilles noted earlier this week, Chianti Dan picked the worst time to get creative with UCLA's uniforms, rolling out an all-white alternate for the U$C game, a game that has traditionally been UCLA's blue and gold versus U$C's cardinal and yellow.  So yeah, it's great that Morgan Center finally got Adidas to bring us some cool alternate uniforms, but the timing and execution of the uniform roll-out has been a total (but typical) Morgan Center fail.

Uniforms are a recurring theme here at BN, ever since Adidas decided to roll out the TechFit uniforms, which we derided as cheap-looking, child-sized knock-off looking uniforms that were lame on multiple levels, most noticeably with the shortening of our iconic UCLA shoulder stripes to mere dashes on the shoulders (never mind that they don't actually fit our players). Soon enough, we learned that Adidas wasn't the problem: that they were more than capable of making sleek, cool-looking alternate uniforms that people would love, doing so for Michigan and Notre Dame.  Could Adidas do a better job of marketing the UCLA brand?  Sure, they've been really weak, but is that really on Adidas, a relatively new player in college athletics?

Nope, that falls on the shoulders of Moron Morgan Center, who should have a coherent, comprehensive plan to promote and build brand identity, which would include aggressively protecting UCLA's traditions (such as the shoulder stripes, which are called freakin' UCLA stripes by uniform folks like Paul Lukas at UniWatch), image, and color scheme (can we pick a shade of blue and stick with it dammit?).  Naturally, Chianti Dan and his staff of tone-deaf clueless bureaucrats have failed completely on this front.

We had hoped that following the off-season, with time to adjust and tweak the uniforms, Morgan Center would make sure Adidas got it right, that the shoulder stripes would return to their position of prominence, that our uniforms would continue in the tradition of great UCLA uniforms from the past.  But as we saw when the home uniforms debuted against SJSU, they were the same, cheap-looking, second-rate uniforms from the prior season.

We've spent a lot of time pushing Morgan Center to do something creative, to roll-out an alternative uniform for UCLA football.  We talked at length about, even though it feels like a "gimmick" rolling out these alternate uniforms is not only a great recruiting tool, but it's a great merchandising opportunity for the school (basically, you can now sell three uniforms to fans instead of two: and we know folks will buy them, as those Gary Beban throwbacks flew off the shelves when UCLA debuted them).  The recruits love it and our own guys have been hoping for something alternate this season.

Let's talk about the actual uniform and the total failure to properly roll it out after the jump. 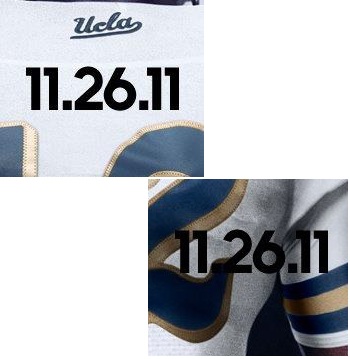 So on one hand, yeah, I'm excited that Chianti Dan finally got off his lazy ass and had Adidas come up with something special for the Bruins.  I've seen the teaser images on Morgan Center's Facebook page (posted above) and I think this uniform is going to look great.  My prediction is that, as a uniform junkie, I am going to absolutely love it.  I'm going to want to buy it (but I won't as part of my refusal to provide Morgan Center any financial support until Chianti Dan is ousted). I think our guys will be jacked to wear them (since many of them have wanted this since the beginning of the season, and continue to think it looks cool).

So, despite all these positives, Morgan Center has completely failed in their execution of debuting this uniform.  First, as we've noted on BN, all-white alternate uniforms are not something to be used in our traditional rivalry game against U$C, especially since it was our own Rick Neuheisel (working with Pete Carroll, and now Lane Kiffin) to make sure UCLA vs. U$C is played in the traditional blue and gold versus cardinal and yellow.  It's not very often I find myself agreeing with Rick these days, or even with Cheatey Petey or his disciple Hello Kiffin, but these three got it right: UCLA versus U$C should ALWAYS be UCLA blue and gold home uniforms versus U$C's cardinal and yellow home uniforms.  ALWAYS.  These uniforms are an awesome idea, but the timing is absolutely terrible.

When should we have rolled these out?  Our nationally televised game against Arizona would have been the perfect opportunity to showcase these uniforms, especially since they're road white uniforms.  Or hell, even against Stanford (where the Cardinal rolled out their alternate all-black uniform, the first of two alternates they're wearing this season . . . do you hear that, the stogy academics at Stanford are wearing two alternates in one season, and it took us this long to get just one?!).  Or, if Adidas didn't have them ready to go, wearing them in whatever lame bowl game we end up in would be a great opportunity too.  Not a 7:30 p.m. PST game (where no one on the East Coast will see or care since both teams are irrelevant on  the national stage, us because we suck, U$C because of their sanctions) that is being televised on second-rate Fox Sports.  Total facepalm.

Speaking of Stanford, let's talk about the execution of the uniforms.  Stanford will be rolling out an alternate Nike Pro Combat uniform against Notre Dame this Saturday (not in their traditional Big Game against Cal, mind you). But rather than meekly announcing the uniform in a "blog" emailed by their athletic director, Stanford teamed up with Nike and their Pro Combat uniform was debuted with fan-fare with the other Pro Combat uniforms for other schools at the beginning of the season, getting promoted by Nike for Stanford on multiple social media platforms (which has the added benefit of giving the school more time to merchandise and sell these products), getting the fans excited for the football season and these sleek designs.  Never mind that it was more time for recruits to look at those sleek Pro Combat uniforms and picture themselves in them (and we've heard time and time again, recruits are into this stuff).

But more importantly, Nike worked with Stanford, not just their athletic department, but with the coaches and players, to perfect the look:

Stanford didn't like an early Nike design that too closely resembled the 49ers' colors and also nixed a Heisman Trophy logo on the palms of the gloves. Stanford preferred a block "S" to what was ostensibly an homage to 1970 Heisman winner Jim Plunkett.

The team's senior leaders approved the final uniform that will be used Saturday.

There's two big nuggets in here which highlight how Stanford's athletic department is doing it right (which might explain why they always win the Director's Cup) and how Morgan Center is, once again, a total failure.  First, Nike worked closely with Stanford, its head coach, and its players in coming up with the design. Morgan Center, on the other hand, kept everyone, including Rick Neuheisel and team captain Tony Dye in the dark:

Senior safety Tony Dye, one of the team's captains, has no say on the matter.

"Those equipment people won't budge for anybody," he said. "It's kind of frustrating because I'm a captain and they wouldn't tell me, but I'm praying and hoping it's all-white. But that's me just guessing. ... You know I've been pushing for all this, but I gave up on all that at the beginning of the season."

Gee, notice that part about Stanford's senior players approving the uniforms for Saturday?  I guess that's not in Chianti Dan's playbook. Now, I know I've been harsh on Morgan Center and people are going to wonder why Adidas isn't getting hammered too.  Well, as we saw in the Michigan vs. Michigan State game, Adidas isn't really the culprit (that was the game where Nike rolled out the Spartans' Pro Combat uniform, and Shoelace and Co. surprised everyone by warming up in traditional Michigan away uniforms, but then coming out for the game in the alternate retro-inspired away uniforms, which really stole the show, despite MSU's win).

So, not only does Chianti Dan pick the ABSOLUTE worst time to roll these uniforms out, but he isolates the players from the decision-making process.  He'd get away with it too, if Stanford didn't just flat-out show us how it's supposed to be done, with input from the players wearing the uniforms, and rolled out as part of a systematic, aggressive marketing plan that demonstrates strong brand identity and awarenss.

In other words, just another TOTAL FAIL by Chianti Dan and his tone-deaf staff of fools at Morgan Center.  Just another glaring example of how these people at Morgan Center are unaware of our traditions (all the more infuriating since Chianti Dan should know as a fellow Bruin) and behind the curve, because rolling this uniform out at the end of the season just reeks of desperation.