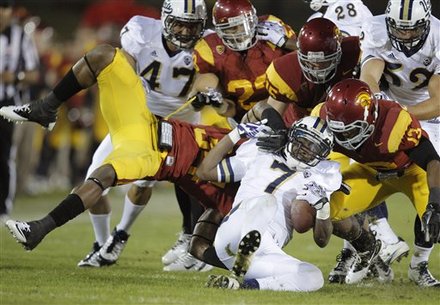 Someone in the athletic department (by the way, no capital letters for that bureau until capital letters are deserved) came up with the idea of going with alternate jerseys for whatever reason. The implementation of the idea could not have been more screwed up.

First of all, what was the point of the white uniforms? If you’re going to make a sea change in the look, why not incorporate the school colors? All blue or all gold? I understand why going all blue wouldn’t work, given the athletic department’s failure to discern what color blue is the correct one. Instead of all gold, however, the athletic department chose to make us albino Bruins, wearing the white flag of surrender cleverly cut up and re-stitched to look like long underwear.

This decision ranks with Ford’s production of the Edsel or Shelly Long’s choice to leave "Cheers" to make "Troop Beverly Hills" as industrial strength failures. Was it for the surprise and shock value which was going to rattle our opponents? In my opinion, that ploy would only work if we were playing children with some sort of phobia having to do with longjohns. Laying aside the failure of the major premise, the idea has no chance of working when you announce it well in advance of the game.

You see, Morgan Center, there’s no surprise that way. I had a recollection that Notre Dame came out with green jerseys once so I looked it up. Notre Dame had used green jerseys off and on for many, many years, but were remembered for using green jerseys against just$c* in 1977. Notre Dame won that game. Also, Notre Dame was national champions, so it’s a little unlikely that the color change had anything to do with it. One footnote. The article I checked on Notre Dame green jerseys had an interesting comment:

"Kuharich did continue the tradition of wearing green occasionally, but more importantly, added UCLA-style shoulder stripes and a green shamrock to the gold Notre Dame helmets."

The entire world knows about "UCLA-style shoulder stripes" except UCLA and its uniform provider.

Was it to get the team excited? As I recall, that worked for the Burt Reynolds and the Mean Machine in a movie. Our situation was not from a movie, even though it appears to have been scripted like one of the chain saw massacre movies.

No one asked the guy in charge of the team or any of the actual players if they wanted new uniforms with colors none of our players had ever worn before as Bruins. It did seem to get the trOJans fired up, so kudos to the athletic department for that.

The choice inspired our offense to score zero and our defense to give up 50. The one positive note I have is also a negative. From the only photo I have seen, it appears that the long john uniform jerseys actually fit better. There are no "UCLA-style shoulder stripes," of course, but they aren’t the too-small spandex models. In any event, the photo of the jersey makes it clear that uniforms can indeed be acquired which actually fit. Our athletic department was unable to get uniforms in our school colors that fit.

In my opinion, every aspect of the white uniform fiasco is a graphic illustration of why there must be a total housecleaning in the athletic department. There were decision points at various stages, as there are with any decision in any business. The guy in charge of every single, solitary aspect of all the athletic endeavors at UCLA ultimately had to make those decisions.

Every decision was a total failure. And that pretty much sums up Morgan Center - failure. And speaking of failures, I just previewed this post, and as it turns out, I am a failure in figuring out how to put in paragraphs. What the heck - imagine there are paragraphs in the correct places.