Bumped. Many thanks to IE Angel for helping us close out this season long endeavor. We are done with this and unlike Chianti Dan, we are not going to bother going through the motions by running this test for the BS "championship" game. Suffice to say this has been a massive fail from all angle and just one more datapoint why Chianti Dan's decision to keep Neuheisel around during this game week look absurd at many level. GO BRUINS. - BN Eds.

0-50. Wow. Let that seep in because we will all be hearing about it for a very long time: 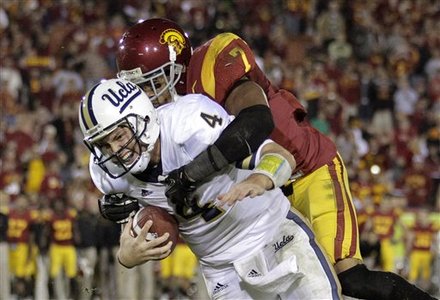 I've been through more than my fair share of ass-kickings in my life, both on and off the football field. I've been on both sides of games like the one UCLA and its fans had to suffer through last night. They are the kind of games that you have to reserve judgement on until you remove yourself from the moment.

As much as I am sickened by the incessant indifference and political speak and (what comes off as) arrogance by the Athletic Department at UCLA, I 100% believe that the correct decision was made to not fire Coach Neuheisel at the post-game presser. No decision that big should be made in the heat of the moment. However, the decision should have been made on Saturday morning. And it shouldn't be a decision that requires a lot of thought.

I've said many times to my family, friends and peers that the decision to remove CRN should have been made 3 times before today.

2. After the debacle in Tuscon.

3. After the snow blowout in Salt Lake City.

The body of evidence against CRN is too strong to argue at this point, as it was a year ago and two months ago and a month ago. Wholesale regime change is the mantra that needs to be taken by anyone who cares even a minuscule amount about UCLA athletics.

But that is not the point of this post.

So let me get to the breakdown of the game that showed how wide the gap really is.

1) Is our defense prepared for each and every team we play?

I think a simple no would be enough to sum this question up. But I am nothing if not descriptive in my analysis of sports, so allow me to humor you.

Unlike last week, USC was not the 92nd ranked offense in NCAA D1 football. USC is a top 20 offense. USC managed to put up just under 600 yards of offense against the "clowns riding a vespa through a car wash" that in football terms would be loosely referred to as a defense.

-UCLA managed to sneak in 3 TFL's in this beatdown including a very aware coverage sack of the Golden Douche by Patrick Larimore where he abandoned his man in coverage to go and get a stat for his All-Pac 12 Honorable Mention highlight reel. (Despite being the most poorly performing LB throughout the season, in my eyes).

-Zero turnovers, barring a dropped interception by Dalton Hilliard early in the game the play after Tony Dye got hurt.

Once again, I am a very tough grader usually in terms of defensive performances. This game does not call for that because it was obvious from the first series that this defense was not prepared to play. Grade: F: (0.0)

2) Do we call offensive plays to catch our opponents off guard?

Despite the final score, UCLA did not look completely lost on offense. Almost 400 yards of total offense. The first drive was pretty much a summary of the entire season/CRN era.

"Wow it was easy for USC to score there. This is going to be a blowout unless Prince balls out."

-Rush for 0 by Franklin.

"Someone is going to go Malaluga on Prince today, I can just see it already."

"Hey, targeting our best player early. I like that play."

-Rush for 2 yards by Franklin, Prince sacked for 4 yard loss.

"Hope they go to Fauria or Rosario down the middle here, the USC linebackers haven't attempted to reroute anyone over the middle and SC's one safety is shading over the top."

-Pass to Fauria for 16 yards, Penalty by Harkey for moving when he is covered up by a reciever.

"I will not miss Harkey, such a stupid and predictable penalty."

-Pass to Jordan James for 29 yards

-Kevin Prince 1 yard run on a scramble where SC has every receiver blanketed.

"You know that UCLA is going to run up the middle here."

The last play got me heated because the play was right at USC DE Nick Perry, who is USC best player besides Barkley. Worse yet, he is lined up over Cory Harkey. Why on earth would you run at that matchup? Of course Perry blows up Harkey, cuts off DC's running lane and he gets swarmed by SC's LBs.

Some good, very bad when it mattered most. What sums up CRN's coaching tenure at UCLA better than that phrase.

Grade: F (0.0) Mainly out of spite here, but I don't expect to be argued with for giving an offense an F when they don't score.

3) Do our players look like they know what they should be doing at all times?

Wasted timeouts at the beginning of both halves: Check. I've never been as PO'd at Kevin Prince as I was about the timeout wasted because of him trying to put on his shoes. There is no excuse for not tossing aside the shoe in a pressure situation until the next play or stoppage of play, IT IS A FREAKING SHOE.

Predictable play-calling at the goal line and when it matters most: Check.

No adjustments on defense, despite giving up 300+ yards in the first hafl: Check.

Losing the turnover battle: Check. Even with UCLA recovering all 3 of KP's fumbles.

Ineffectiveness on 3rd down on both sides of the ball: Check. 3-12 on offense. 5-8 on defense.

The fact that this checklist can be applied to every single game, win or lose, is an indictment of the culture of mediocrity in UCLA football. Good teams don't do these things. UCLA will not be good until that is fixed. Grade: F (0.0)

They showed up for both halves. I'll give the UCLA players and coaches that. The backup offense with Malcolm Jones getting 7 carries managed to drive down the field against USC 1st string defense, but came up empty inside the redzone for the 3rd time in the 4th quarter. Only lost 21-0 in the 2nd half, improving from 29-0 in the 1st half.

Really, the answer to this question is no. The Bruins did not really play hard for 15 total minutes in this game. It is tougher to give full effort when no effort is made by the coaching staff to adjust to anything that the other team is throwing at you. Matt Barkley managed to do what our defensive scheme had been daring a QB to do the entire season, complete as many short passes as you want and we will continue giving you 6+ yards of cushion. USC must have had over 200 yards after the catch, and that may be selling them a bit short.

Anyone that questions CRN's motivational skills being more than his inner-attorney selling you on keeping him around should watch this game from start to finish. Grade: D- (0.3) Simply for showing up and being on the field in both halves.

5) Do our players execute?

As bad as everything seemed, this aspect of the game is not a terrible as everything else. The missed tackles were way lower than the 18 against Colorado. I didn't keep a strict count but it was around 10, probably under. Which is average. Not good by any means. Just okay.

To be honest, the defense played exactly the scheme they were coached to play. Both the offense and defense had more than a few notable FUBAR moments. For example, Taylor Embree and Nelson Rosario both had drops, Erik Kendricks had an absolutely awful first half and was responsible for the McNeal TD run, Dalton Hilliard's dropped interception was tough, Kevin Prince made some really poor throws (overthrows of Evans, Rosario and Fauria) and bad decisions near the goal line (the McDonald interception and forcing the ball to Fauria in triple coverage), Jeff Locke had a punt go off the side of his foot for what has to be one of like 3 bad punts by him all year, and I am fairly sure that every DB got burned at least once by either Robert Woods or Marquise Lee.

This was ugly execution-wise to be sure. But not as ugly as everything else, especially the coaching. Grade: D- (0.3)

6) Do we have leaders on the field?

The biggest bright spot here is that the team managed to avoid a fiasco like Arizona before halftime. i was fully expecting a brawl or at least some chippy-ness late in the game. But it was pretty clear that any fight was sucked out of UCLA after USC first possession of the 2nd half. Nelson Rosario had a good game numbers-wise, but 76 of his 118 yards came after UCLA was down 36-0. Kevin Prince gutted out another game where he got hit hard and often, but was clearly in over his head against one of the most talented defenses in the Pac-12 (doesn't get easier next week). No leaders were present on defense, as is the case fairly often. Tony Dye looked on his way to a good game before getting banged up early. I said after the Arizona game that this team had quit on CRN and that quitting wouldn't translate into UCLA being unable to win. It has been more obvious ever since that game that this team was playing for itself and not for CRN. I fear that this loss is not rock bottom because Oregon is a better team than USC with a much better offense. I 100% know that this defense will not have a Monte Kiffen-type scheme to slow down the Ducks. Friday night will be a very long evening. Grade. F: (0.0)

Based on the discussion here is how it shapes up:

I think it is fairly safe to say that CRN and the football program will not be meeting expectations this season.