There's not much I can say at this point that other folks haven't already pointed out. It's patently obvious to even the most casual observer of UCLA athletics that we're a national joke.

Our football team is a hapless 6-6 group that squanders talent (how the f**k do you not throw more to a TE that is a match-up nightmare at 6'8" with some speed?!), led by a coach that plays not to lose, that managed to back into the championship game for two reasons: (1) our division is an absolute joke and (2) the only team worth a damn (which just full-on bent UCLA over) is ineligible. Our basketball team is a complete disaster, saddled with a stubborn coach who refuses to adjust despite personnel shortcomings and who has run talented players out of the program (Mike Moser, Chace Stanback, among others) because he insists on playing favorites (the Belgrade Bricklayer immediately comes to mind, although the Wears are certainly shaping up to be a miserable Ben favoritism second act), that has failed to beat mid-major tune-up types in LMU and MTSU.

If I was a fan of any other school, I'd look at UCLA and laugh. We're pathetic. And there's only one person to blame: Chianti Dan Guerrero. The incompetent, do-nothing bureaucrat who is more concerned with taking chianti trips with donors than with competently running our athletic department, is a public employee who sits back, collects a king's ransom ($600K+), and does just enough to not raise the ire of clueless bookworm academic Chancellor Gene Block.

I'm not going to do the normal Bruin Bites today folks, because 99% of the news about UCLA is how we're a total joke on the football field. You read stories about how it's embarrassing to the Pac-12 that UCLA is even in the championship game, about how if UCLA somehow pulls off some kind of crazy win (which it has the talent to do, despite our complete failure coaching staff . . . I would bet Guerrero's salary that if Urban Meyer was the head coach at the start of this season, with all the same players and injuries, UCLA would be at least a respectable 9-3 right now, guaranteed).

Bruin Bites has a pretty standard formula that all of you readers know by now: there's a handful of sports-related side stories, the kinds of tidbits that are interesting or neat, but not necessarily the subject to a full-blown write up on BN. There are a few profiles of fellow Bruins doing good things, and then there are a couple of feel-good stories about the wonderful things UCLA is doing, on the academic side, to improve society and the world at large.

I'm not going to do that today. Why? Because, yes UCLA does a lot of amazing things. We all got lucky to go to the one of the greatest universities in the world, the kind of school that has helped change the world for the better. If not for Jackie Robinson's bravery, what would professional sports look like? If not for Dr. Leonard Kleinrock, what would the internet look like? If not for Ralph Bunche, Glenn Seaborg, Bruce Merrifield, William Sharpe, Elinor Ostrom, and Richard Heck (UCLA's Nobel Laureate alum), how different would our world be? Or how different would life be for the hundreds of thousands of people who either were themselves saved, or had a loved on saved, at the UCLA Medical Center? Make no doubt about it, UCLA is amazing.

But I'm not going to spoon feed us a feel-good story about our university today. Despite all of those amazing things that UCLA is and does, I am embarrassed to be a Bruin today. I'll go to work tomorrow and my co-workers from other Pac-12 schools will make biting comments about the total beating we took on Saturday. We can pretend that football is one small slice of what being a Bruin is about, but the reality of life is that football (and basketball to a lesser extent) matters a lot.

Football is like beauty. In the long run, it matters little to the bigger picture of a university. The academic excellence, the achievements in arts and sciences, the cutting-edge medical center, those are like the internal qualities of a person, like their sense of humor, their patience, their intelligence, or wit, etc. Those are the things that make a university truly great (i.e. why Harvard is, well, Harvard). But beauty football is what brings the attention. It's football that brings in the big money, that gets the alumni to open their wallets and splash cash for their alma mater.

Don't believe me? Go to Google's News page. Type in UCLA and hit search. Gee, where are all the stories about our wonderful academics? Our cutting edge engineering breakthroughs? The life-saving procedures at the medical center? 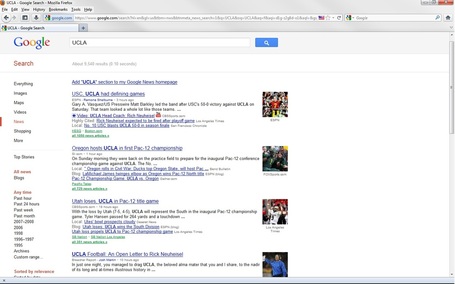 Like I said, 99% of the stories out there about UCLA right now are about our football team, better known as the Vespa Clown Show (never mind the total failure that is our basketball team, also known as the Dumpster Fire Squad).

So, there are going to be some Bruin Bites, but it's going to be a bit different today. Follow after the jump for more.

It's actually been a bit of a whirlwind around BN since Saturday's beat-down in the Coliseum, so I'm going to use Bruin Bites as a way to keep everything straight and keep folks oriented. Here we go:

Those are your special edition Bruin Bites folks. Right now, like I said, all of the news floating around the UCLA-iverse is focused on football and Chianti Dan's inept failure to take action.

Now is the time folks. Make your voices heard. We need nothing short of WHOLESALE REGIME CHANGE IN WESTWOOD, STARTING WITH CHIANTI DAN GUERRERO AND RICK NEUHEISEL.