Bumped. This is how it's done. An example of what UCLA alums who want a wholesale regime change at UCLA athletics to reestablish our football and basketball programs could be doing to send Chancellor Gene Block a message. GO BRUINS. - BN Eds.

Thanksgiving was terrific. We had friends over, had a terrific spread and great conversation. I ate  - entered food coma - repeated as necessary. Then Saturday night came along. I knew it would be a challenge for the Bruins having listened to ill-advised comments from CRN saying "we closed the gap" and knowing $UC was going to use that as bulletin board material (See Barkley's post-game comments - THANKS RICK!). Then the 2X4 to the head. 50 to fricken 0 followed by more benign and idiotic comments from Morgan Center.

After puking up 3 days of Thanksgiving gluttony, we (my wife is also a Bruin) felt we needed to do something to show our disgust and weariness of the humiliation that currently comes from the revenue generating athletics at UCLA.

First - I re-opened the outgoing mail from Friday which contained our quarterly check for the UCLA Fund. I voided the check but didn't throw it away. It isn't a lot of money compared to Guerrero's salary but its what we can afford to give back for each of our educations at UCLA: 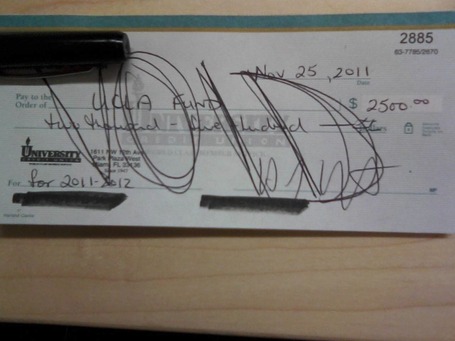 I voided the check because it is a fallacy to think that academics and athletics at major universities are somehow separate or unrelated entities. Money from donations, TV, tickets, etc. go to pay for non-revenue sports and academic programs. If there were no football or basketball at UCLA - we'd be a community college.

These athletic programs help with the visibility of UCLA everywhere else outside of LA (Do a search on the internet and see what comes up when you type UCLA). I sent the voided check to Chancellor Block. I am sending few other things back. After the jump ...

You may think people on the east coast don't watch the late games from Cali - but you'd be wrong (Miami - dinner is at 11 pm and clubbing til 5am). But when they see 50-0 they dismiss UCLA as well as the rest of the PAC-12 as a joke. Well - from here - we cannot picket Morgan Center or be vocal at UCLA - but I can hold back money until the regime is changed. Does that hurt UCLA students....maybe...but then they should get up off their asses and be vocal for change and demand that BOTH academic and athletic programs are held to excellence. Apathy is exactly what DG wants as it will allow him to keep his job and mediocrity.

I also sent back my UCLA gear (modified my "champions are made here" shirt) to Chancellor Block: 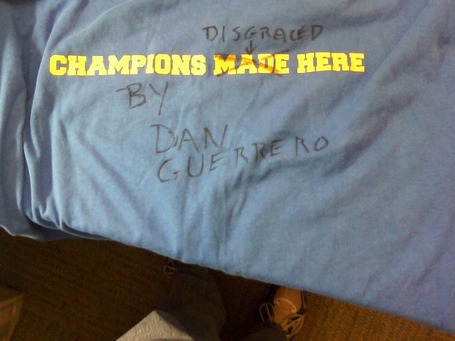 There is no need to have pride in UCLA by wearing their gear. The leadership has no pride or value in our school other than a egomanical meal ticket - so why should I continue to be humiliated every year. Block can have my gear and I don't care what he does with it: 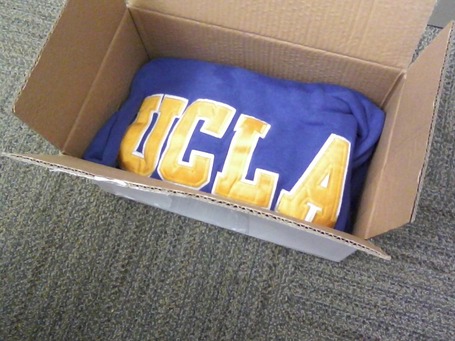 Finally - I included a letter to Block asking him to do the right thing and fire Guerrero as well as his cronies at Morgan Center. 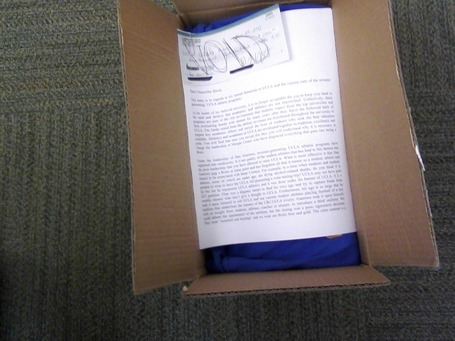 I included some personal views such as the wine tasting trip by our UCLA AD while underage athletes and students are dying of alcohol-related accidents. Is that the image we deserve and want our AD to portray? Kind of hypocritical and plain stupid. I also included how thankful I was that Coach is no longer alive to see this debacle. I cannot imagine how difficult it was for Coach to be in the same room with someone as vile and self-centered as Guerrero. I also let him know that we will no longer make the yearly trek for homecoming where we spend thousands of dollars at ASUCLA and for tickets. Regardless - the letter was cathartic and I recommend writing for others in the BN who are angry and fed up. We are shipping this today: 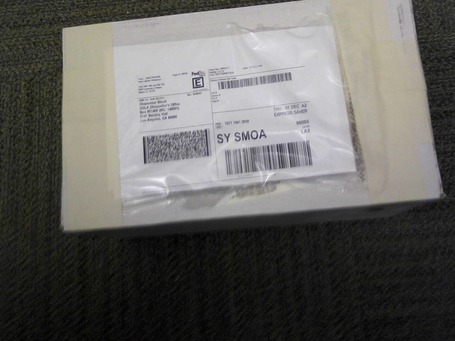 You can criticize me for turning my back on UCLA. Again - you'd be wrong. I love UCLA and would not trade my education or experiences from there for anything. Ask yourself this - would you stand around and watch your mother get used, humiliated and beat up by a drunken scumbag? I wouldn't and UCLA, who has given me so many tools to succeed, is like a mother to me. What is happening to her, by a former Bruin no less, is unthinkable. Mediocrity and irrelevance is now acceptable? Since when? I bleed blue and gold. My 2 year old can do the UCLA fight song and punctuates it with $C sucks. I sat through more than 3 hours of complete destruction on Saturday night as did many of you. Those are 3 hours of our lives we can never get back. But you can do something about it.