We will have to plenty of time to get back to UCLA coaching candidate discussion. For now though I wanted to share with this image that just came out of Spaulding a little while ago: 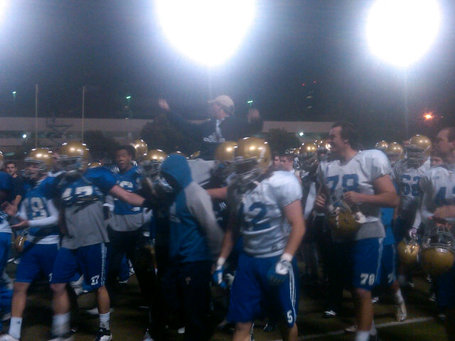 Coach Rick Neuheisel was carried off the field by the players who were signing our fighting song. From Jon Gold:

Neuheisel's last practice at Spaulding field as head coach of the Bruins culminated in a celebration, not for a coach, it seemed, but for a UCLA legend.

It was more than an emotional scene - Neuheisel and some assorted family in tears, players solemnly trudging off the field - but it was one I'll remember.

That's good stuff. There is no way Bruins have a realistic shot on Friday night. Yet it is heartening to see the classy route Neuheisel has taken since the news came on Monday and how our guys have rallied around him.

Friday night the entire Bruin Nation should be united rooting for the blue and gold. We get it. Bruins do not have prayer. None. However, powerful emotions can often create interesting dynamics and vibe in a college football game. Consider this is an open thread for all UCLA football related discussions tonight.

UPDATE (N): Here is the video from official site:

If you bleed blue and gold it's tough not to get emotional when you watch that. We all were rooting for CRN and wanted this to work out in the worst way heading into this season. It just didn't happen. But you can bet all of us will be rooting for him to be successful in whatever he pursues in the next chapter in his life. GO BRUINS.