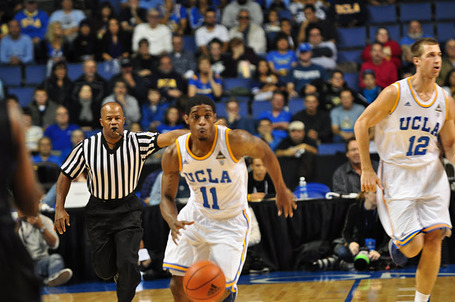 First weekend in quite a while that was a net positive feeling for me as a UCLA fan. Saturday ended great with the last second victory over the Sun Devils. And I was ready to go for Sunday afternoon at Citizens Bank Arena in Ontario.

I've been to CBA a few times (hockey, Globetrotters, Lakers' preseason) in the past and it is a really top notch facility. Rolled into the parking lot at about 1:20 before kickoff with my dad. No charge for parking on site, which is one of my favorite things about the arena. First thing I saw walking towards the General Admission entrance was a group of about 200 CSUSB students rolling through decked out in black and blue.

It was pretty obvious early on which team's fans were going to be the loudest. UCLA may have had the band there and the infinitely more attractive dance team and cheerleaders; but Cal State San Bernardino was more vocal and at least equal in number to UCLA fans.

Anyway, observations from the game. I'm going to separate it into things I liked, things that I didn't like, then a couple predictions/projections moving forward. Take it with a grain of salt, because I'm a football player watching basketball so my expertise is limited.

I've loved this kid since his freshman year and the whole playing with one eye incident. He is absolutely the heart and soul of this team. Josh Smith is the best player, Zeke Jones is the leader. But with team lives and dies with Reeves. Specifically in this game, he put up 16 points and 10 rebounds and played mostly solid D inside. Those points don't give credit to the momentum of the shots he took, those 3 pointers were both crucial shots and he was the most consistent player, IMO, on the court.

If not for my personal bias towards Reeves this would be my number one point. The raw numbers (33-41) are solid as hell and would have been #2 in the nation percentage-wise last year. But even more pleasing to me than the numbers, was the confidence in shooting. Aside from D'End Parker, every player that stepped to the line looked like they expected to drain their foul shots. Josh Smith looks endlessly better than he did at any point last season, and Reeves has really improved at the line. With how big this team is and how much it will rely on inside scoring, good FT shooting is essential to UCLA getting to the level of play necessary.

That team was passionate throughout, played intense man defense and switched to zone for a few stretches, and gave UCLA the type of game they needed in an exhibition format. Probably earned themselves another game against the Bruins next year. #30 on CSUSB, I think Shumpert was his name, was the best player on the court for stretches of time. He was playing inside against guys athletically and physically superior to him; but still put up an efficient 14 and 7 on 4-6 shooting, 3-5 from outside.

I see a lot of big things from Zeke this year, not just because he has full use of both hands and wrists and shoulders this season. After fouling out on the bizarre table-top of a CSUSB player with like 5 minutes left, Zeke turned into a 2nd Howland on the sideline. He called Lamb over during stoppage of play, was the first guy off the bench on timeouts. He kept himself involved in the game, even though he couldn't get into it. Been a while since this team has had a player like that. Seeing an all-conference type season for Zeke.

Team was unbelievably flat to start, which is not unusual in a game you are almost guaranteed to win before you walk on the court. But out of the 40 minutes played, I would say that UCLA was more intense for maybe 8 minutes. The talent of Smith and Nelson won out in the end; but if the same team were to walk out against Texas or Kansas, this game would have been a 10 point loss.

The Wear twins were disappointing to me. I don't want to seem like attacking a UCLA player; but they played soft in this game. It was the first time I'd seen them play since watching them play in high school against Etiwanda in the playoffs. Kind of gave me a similar impression in both games. They got bothered by the physicality of CSUSB like they got bothered by Etiwanda's tenacity. Neither of them appeared to do a good job defensively against significantly smaller post players, and they struggled outside as well, a couple of #30's 3-point shots were over David or Travis.

I was really excited about Parker and still am to a degree; but that kid is unbelievably raw. You can see the athleticism right away; but he needs work on both sides of the ball to be able to contribute.

Powell didn't really make an impression on me at all, aside from how ridiculously bow-legged he is. Has nice touch on his passes, made a nice 3 from the corner. Hope to see more of him in the future. Probably played the best of any new guy in his limited minutes.

Stover and Anderson being out made a difference. This team has to be able to go more than 8 deep to be as effective as possible. Our guard depth without JA is worrisome, IMO. I like Tyler Lamb at the 2, more than others probably. I am not yet sold on Parker and Powell, so I look forward to JA returning from his suspension to be the player he was at the end of last year.

Despite the shooting numbers and the fact that he had to play the 1 for around 15 minutes, I thought Lamb had a nice game. Loved his intensity on defense, he looks every bit as confident as Lee did last year in his role as stopper. His offensive game looked a lot crisper than last year. Ball handling was solid, if not a little overzealous. His only TO was on a play that he appeared to get tripped up on while driving the lane. I don't expect more than 5-8 points a game out of him; but I see him holding on to the 2 for the next few years (barring recruits coming in)

I see a bounce back from this disappointing performance in the opener on Friday night. Hopefully, getting Stover back will keep the Wear's out of the paint on defense a little more and I think that the newcomers will be more comfortable in their first regular season game. Plus, I don't know that there is a team in the country that can stop the Smith/Nelson combo inside.

I do not know how this team will get through playing an entire season on the road. I do know that the Sports Arena will not be friendly all the time. There is no way that a sizable fan base will travel that far on Thursday nights or Saturday mornings. It is going to be odd; but this team is good enough that there should be no excuse for not getting a Pac-12 title and a solid Tourney run.

So that is my take on the UCLA win over Cal State San Bernardino. Hope to get to a few more games this season. Have good vibes about this season. Looking to reset that counter on the front page for time passed since UCLA's last Pac-10/12 Championship in basketball because who knows how long it will take to reset the other ones.