It pains me to write this post. It really does.

I am trying very hard to find positive signs around the changes in the UCLA football program. We have an unproven coach, but his assistant hires so far have been good. It also means the purse strings have been loosened somewhat to pay for good assistant coaches, a good sign indeed. Recruiting seems to have improved at the outset, another good sign.

But it's the guys behind the scenes who screwed up. Again.

When it comes to marketing our program, the folks at the Morgan Center (namely Scott Mitchell and Mark Harlan) simply are either oblivious or just plain dumb. These are the geniuses who brought you the "Football Monopoly" disaster of an advertisement, an abject failure on multiple fronts. The worst aspect of that horrendous choice for an ad, which by the way was done without Neuheisel's knowledge, is that it allowed the media to lampoon the program relentlessly using those same words.

Well, follow me after the jump to take a look at what they came up with for their 2012 season ticket advertisement.

Here again is the ad that has been put together by those brilliant marketers and sent out via a tweet by the Athletic Department: 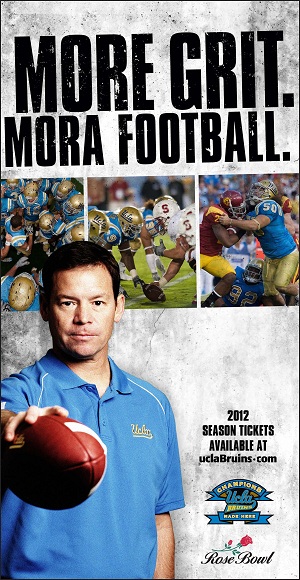 I can't even say that it doesn't look bad on the surface. Let's go through the issues one by one:

More grit? How do you sell that? Coach Mora has never coached in college. I certainly hope it happens, this program badly needs it. But it seems like they're grasping at straws here. Maybe they meant more grits, as in free breakfast for season ticket holders.

That's not even as bad as "Mora Football". Look, we are all dying for someone to bring an identity, a toughness, to this team, and I hope Coach Mora is the guy who does it. But using this title sets up the ad to be once again lampooned by the media, who won't hesitate to take lame potshots such as "Mora Football, Mora the same". The LAT and OC Register will think that's really clever.

First things first: I'm not sure if this is a negative or not...but these pictures are at least two years old. It's the old uniforms, which we all agree look so much better than the techfit spanx that make the players look ridiculous. So maybe we are going back to those, which would be great.

But, um, look at the photos they picked. UCLA vs. Stanford, UCLA vs. U$C. Two teams that have dismantled UCLA in the last two years. The Stanford picture looks like it's from the 35-0 beatdown we got at the Rose Bowl in 2010. Thanks for the memories guys. I guess it's not their fault. We have 7 home games next year, but lost to 5 of those teams in 2011...I guess if you want to use pictures with the nice uniforms, you're pretty much S.O.L. Not that many wins to pick from...

So, again, maybe I am making too much of this, but this ad is about as far from smart and sophisticated as I can think. Perhaps my standards are too high, but I have high expectations for our program and I am tired of seeing it treated like the local high school team. At the very least, it certainly looks like they made Coach Mora aware of it before putting it together, given his picture here (compared to surreptitious use of a picture of Neuheisel from one of the practices). But guys, come on, let's step up the game.

The regime change in Westwood must include bringing in some savvy marketers, and it will be even sweeter if it comes with Chianti Dan being shown the door.