Share All sharing options for: TONEDEAF: UCLA's Wooden Athletic Fund Wants You to Pay $3,998 for Joshua Smith's "S&C and Nutrition"

As tasser mentioned few days ago we don't really like doing this kind of posts. We rather focus on our programs and our players. However, the incompetence of Dan Guerrero's athletic department is so surreal that it is near impossible to stay quiet while we keep seeing one embarrassing example after another marking the total cluelessness in Westwood.

So picking up on tasser10's thoughts on UCLA's total disinterest in developing meaningful relationship with the alumni community, we couldn't help but chuckle at the following spread from the Wooden Athletic Fund: 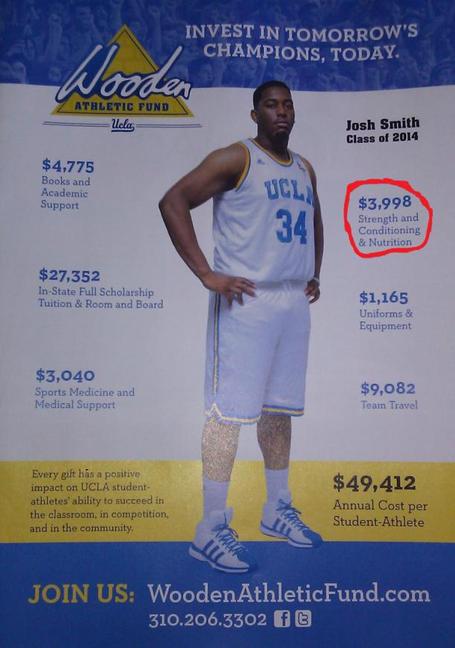 That was from page 52 of the latest "UCLA" magazine.

I wasn't sure whether to laugh or cry to see WAF using the picture of Joshua Smith in making their care for "investing in tomorrow's champions." One has to wonder if people who work in this department actually watch our games or are fans of our programs.

Seriously. Do the people who "brainstormed" to come up with this one page and and then "executed" running this ad in the "UCLA" magazine sent to Bruin alums all over the country didn't see the disconnect between marketing the ideal student athlete and what the same alums have been watching when they tune in to check out our hoops team this team this year? Do they get how absurd it appears when they ask for money so that we could pay for "strength, conditioning and nutrition" of Joshua Smith? WT_?

The advertisement itself is a lovely concept. It makes sense. But talk about picking the wrong student athlete to make the case. This is not to pick on Smith. He knows what he needs to do and he hasn't gotten it done. Everyone is at fault for the strange saga around Smith this season which goes all the way to Ben Howland. Yet another total marketing fail.

What is inexcusable is for the WAF clowns not realizing how stupid and ridiculous this ad looks. Once again they appear tonedeaf and completely out of touch with the zeitgeist of UCLA athletics.

If they were fans of our programs they wouldn't offer up the kind of advertisement that is so tonedeaf and out of touch. I guess it is par for the course for Chianti Dan's incompetent department. As we have said along, UCLA alums should not invest one penny our athletic department until we have a change of leadership at the top. Chianti needs to go.