Today is the last day of finals week in Westwood. Let's hope it has been a successful week for all of our student-athletes, and that our football team enjoys a well deserved weekend break before getting back at it on Monday. I'm really looking forward to following the practice updates next week to see how our team responds to interim coach Mike Johnson, and if there is a change in the vibe under his direction. Personally, if I never hear the word "crisp" to describe a practice again, I'm good. The imminent departure of assistant coach Jim Mastro will be another interesting dynamic. It is extra painful that he is off to WSU to join Mike Leach's staff, when you consider what a popular and successful (and easy slam dunk) choice Leach would have been for this team. Plus, we could have saved Coach Mastro all those relocation costs.

Of course, the big topic the players will get to deal with will be the ongoing chaos of Dan's bungled coaching search. Hopefully it will not cause much distraction to the players and their preparations, but only to those of us on the outside who really care about the welfare of our football program (do you hear me, Chancellor?). There are some very strong candidates like Dan Mullen and Troy Calhoun and Art Briles out there still, while Chianti chases retreads.

Jon Gold's blog Inside UCLA acknowledged there was little news on Thursday. We know Chianti Dan returned from New York yesterday. We can only hope that his time at the Intercollegiate Forum allowed him to spend some time with some qualified D-1 Athletic Directors who have a clue about what they are doing. Maybe the snickering behind Dan's back gave him a heads up that he isn't doing things well enough in Westwood. But even with no hard news coming out of Westwood yesterday, there is always more than enough to talk about with this program. The entire football season and coaching saga has been so consuming in that aspect that I didn't even realize that the Denver Broncos are apparently playing a new quarterback. Now you'd think that sort of thing would make the news.

But back to our football program, we did see a couple of interesting bits yesterday. Most notably, Scott Wolf of the LADN tweeted this last evening:

@InsideUSC A college coach tells me he heard Jim Mora Jr. is out as a candidate at UCLA

While I would dearly love to believe this, the sixth hand nature of this "report" makes me envision of a group of catty teenage girls strategizing prom dates, so we should take it with a grain of salt. And the term "college coach" eliminates Mora himself from being the source. Nothing official in either regard about Jim Mora Jr has come out of the Morgan Center, but the rumors are out there and people are forming conclusions, and this tweet should be a hopeful sign. Of course, people only need to read here to find enough info to reach the obvious conclusion that Mora is very far down the list of acceptable candidates, and that U.C.L.A. should not be wasting its time with him at this point, when other candidates (Mullen, Calhoun, Briles) are available.

Also, we have heard suggestions that the big money donors are not supportive of a Mora hire. We also hear that Guerrerror's seat is getting more and more tenuous, and chasing Mora could be the final straw that finishes him at U.C.L.A. I guess we will see if Chianti's hubris will take the risk. The other key point in this is that the calls to the Chancellor and Morgan Center are working, so keep up the pressure, Bruins. The New York Times has noticed.

And on the topic of candidates way way way down the list, the rumors of a partnership with Jim Tressel have also quieted down. While there is no doubting Tressel was a successful coach, I would also remind everyone that OJ Simpson was a great college running back, Octomom had a succesful pregnancy, Tanya Harding was a US skating champion, and Nikola Dragovic was our leading shot blocker in 2009. The real value of someone goes far beyond one particular area of success. The reasons for not hiring a repeat offending liar and cheat who still has the threat of NCAA show-cause penalties hanging over him outweigh any value he might offer as a coach. Yes we want to win. But this is still U.C.L.A., and I still expect our University to uphold a high degree of integrity and ethics. Hiring Jim Tressel voids that and is unacceptable, especially while there are so many other qualified coaches (Mullen, Calhoun, Briles) without the baggage. It is pretty disappointing to me how many people apparently are willing to forfeit class for a few more W's. Shameful.

This really shouldn't be that difficult. We all know about the natural gifts at U.C.L.A. from the gorgeous campus to the great weather and location to the first rate academics to the unprecedented legacy in the athletic programs. Unfortunately, time moves on and we cannot rest on that legacy and expect it to survive. And U.C.L.A. is about a decade behind the curve on making commitments to its facilities, its fans, and its student-athletes. If Dan would simply listen to those around the school and programs who are more than willing to help, then maybe we could all get along.

Instead, we get Chianti and his ego driving our football program into the ground. you get this. The OC Register has a cute little photo essay yesterday titled U.C.L.A.'s 10 Days of Hell, which spans the blowout to *$c, Rick's firing, the failed attempts to hire Petersen, Sumlin, and Golden, and the loss to Oregon, punctuated with the train wreck that is basketball and Reeves Nelson. It's clever in it's own way, with the degree of snark and derision you'd expect from the OCR, but as usual it misses the target by a mile. It should have been named UCLA's 10 Years of Hell and it needed just a single photograph: 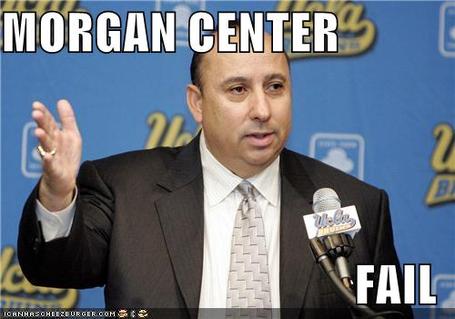