As we debate over the fate of decidedly non-Bruin Alexandra Wallace, we figured there had to be a way to turn the uproar over her awful comments and smug, arrogant attitude into a positive. Part of her vapid screed included making light of the recent earthquake and resulting tsunami that hit Japan last week, the effects of which are obviously still ongoing and will be for a very long time. I'm sure I don't need to tell anyone here that this is not a matter to be callously relegated to a footnote.

Even if you sit halfway around the world in relative safety, I want to remind everyone that you have family in Japan right now. At a world renowned university like UCLA, that's no surprise, but I refer specifically to the Bruin family here, and a few faces that we're all familiar with.

We've discussed the interesting story of one of the forwards on our '95 Championship team, J.R. Henderson Sakuragi, in the past here on BN. The new surname should give away that his address for last decade has been in Japan, and he recently emailed JerseyChaser.com, to let us all know that he's okay:

I was in Tokyo when it happened. On the 14th floor of a hotel that was swaying so much that when we ran down the hallway we were being thrown side to side.

I was getting treatment at the time so I had to run down 14 flights of stairs with no shoes and a sprained mcl. Maids and guest were following us….they were crying which made it worse. I had to usher one maid down the stairs who was about to lose it.


J.R. also informed us the fate of another Bruin legend:

I’m far away from the bad area now. Charles is in Tokyo so he is feeling all the aftershocks. It’s def chaotic near Sendai.

It’s still pretty bad here so keep us in your prayers please.

That's fellow Bruin legend Charles O'Bannon he's referring to. It's great to hear that they're safe, but the hardships aren't over for them or the people of Japan yet. In fact, they may be just beginning.

Illustrating that point is another Bruin in Japan, utilizing a newer form of media to let us know of his whereabouts: 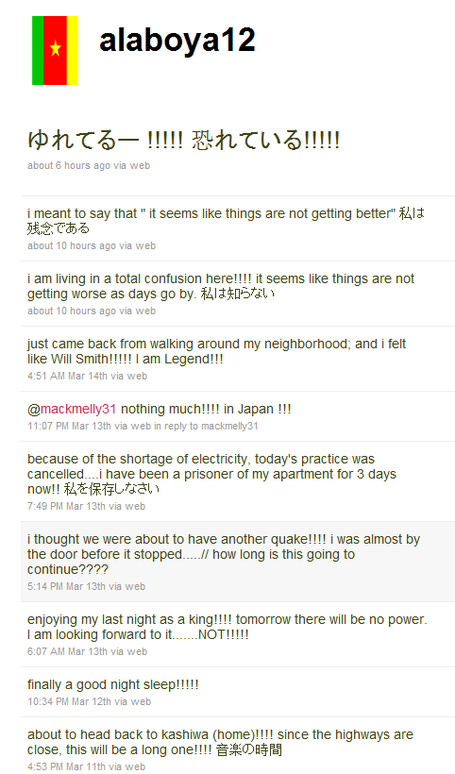 Ben Ball Warrior PAA is clearly okay, but having a rough time. His profile indicates that he plays for the Osaka based Hitachi SunRockers, but his tweets appear to indicate that "home" is Kashiwa, on the outskirts of Tokyo, and close(r) to the beleaguered nuclear plant. His latest message: "yureteru-! osoreteiru!", means "It's shaking-! I'm afraid!" Obviously our thoughts are with Alfred as well and we hope he stays safe through this crisis as well.

They're not the only Bruins dealing with this tragedy to be sure, not to mention the thousands of people who have died or been displaced and are currently without adequate food, water, and warmth. Even if you leave aside the emotional toll on the tsunami survivors, between the continuous aftershocks, the unseasonably cold weather, rolling blackouts, and the ongoing crisis at Fukushima Daiichi power plant and the brave souls there risking life, limb, and radiation poisoning trying to protect their compatriots from the same, these people need all the help they can get right now.

We at BN would like to encourage those of you who haven't yet donated to please consider helping out.

Here are some of the relief organizations:

The Japanese or American Red Cross

Please keep our Bruins and the people of Japan in your thoughts and prayers going forward and many thanks to those of you who have already contributed to this effort.

Our words have consequences, as do our actions.