Share All sharing options for: "Inexperience" - Never an Excuse for a UCLA Team Playing "Ben Ball" in March

It's no secret that this year's edition of UCLA basketball has been less than stellar.  These Bruins have been wildly inconsistent, have either won (BYU, St. John's, Arizona) or kept it close (Kansas) in some real big games against higher-seeded NCAA tournament teams, to only lose (Montana, Oregon, at Cal) or barely win (Arizona State, Cal, UC Irvine) against teams that they should have blown away.

Now, we're been prognosticating on these inconsistencies for a while at BN. Class of 66 had a great break-down of this team's failure to meet his expectations, the standard set by Coach, with their lackadaisical, mentally-soft, and inconsistent play. Achilles broke down the diseased culture surrounding Howland's program and reminded folks that the embarrassment against Oregon at Staples shouldn't be a surprise for this maddeningly inconsistent bunch.

Of course, when the criticism has flown, the sycophants and patsies (who probably supported Lavin through his regular run to the Steve-16 and Dorrell due to his one 10-2 season), have come out of the woodwork to make excuse after excuse for this basketball team.  In fact, the sycophants seem determined to advance that narrative: that this team is inconsistent because of inexperience.

Sure, there are folks acknowledging that the problem is multi-faceted and not solely attributable to experience.

Let me make this clear: experience, or the lack of it, is an absolute non-factor in why this edition of UCLA men's basketball is such an inconsistent joke.

Inexperience is NOT why this team is an inconsistent.  This team is inconsistent because they are mentally-soft, unfocused, and the sophomore core of this team (Tyler "Mr. NBA" Honeycutt and Reeves "The Incredible Sulk" Nelson) lack the heart and determination of AA and JF.  Period.

In fact, I'm going to make this bold claim:

If this UCLA team digs down, focuses on the task at hand, and commits to Ben Ball, they are equally equipped to match the wild success of a particular UCLA team in the recent past (read: Final  Four level).

Let's break that down after the jump.

Now, the sycophants have been tossing out the inexperience excuse out throughout the threads here at BN and in other Bruin online communities.  For example:

However, I do believe that part of the reason for our failures this year has been inexperience. As previously stated, we run a very tight rotation, 7 or 8 guys seeing playing time at the most (this presumes that Brendan Lane is classified as a "rotation player"). Of those 8, Joshua Smith, Anthony Stover, and Tyler Lamb are all getting significant minutes for the first times in their career, and are all experiencing very significant growing pains which I do not need to rehash here. Then there are players like Tyler Honeycutt, Reeves Nelson, and Brendan Lane who are all sophomores, with one year of "experience" under their belts.

Now, this is one of the more well-reasoned inexperienced comments.  Not even one from the usual sycophants.  But let's talk about even this line-of-thought, from an otherwise astute UCLA basketball observer, is completely and totally wrong.

A few days ago, DCBruins put up a post comparing this year's team to the 2004-2005 UCLA Bruins.  I don't think that's a real good, or fair, comparison (for many reasons, but primarily because JF and AA were key cogs of that team and they were true freshmen, whereas Nelson, Honeycutt, and Malcolm Lee are sophomores and a junior, respectively).  To me, let's find a UCLA Bruins' basketball team with a similar make-up in terms of experience: the 2005-2006 squad. 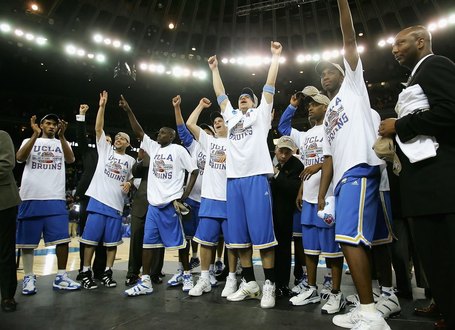 Yes, that's right: the 2005-2006 squad that was one game short of bringing the twelfth banner home to Westwood. Now, I know the sycophants are just screaming to their screens: "that's not fair, this team is inexperienced and that team had experienced players, and it's just not fair!"

And yes, that's right: if the UCLA Bruins buckle down, keep themselves mentally in check (read: Reeves), focus on playing tough, focused basketball (read: Honeycutt), and commit to Ben Ball, they have the same experience and talent that the 2005-2006 team relied on to reach the national title game.

Now, the 2005-2006 team was led by Jordan Farmar at PG and Arron Afflalo at SG. Both were true sophomores with the same level of experience as Honeycutt and Nelson (one prior season as a starter).  Luc Richard Mbah a Moute was starting at PF as a true freshman. Our bench contributors included Michael Roll, Alfred Aboya, and Darren Collison, all true freshmen, as well as true sophomore Lorenzo Mata-Real. Josh Shipp, another true sophomore, was posed to be a significant player that season as well, until he got hurt and was lost for the whole year. Why do I say they were significant? If you look at the statistics, let’s say points scored, you’ll see DC, MR, AA2, and LMR were the #6, #7, #8, and #9 scorers for UCLA that season, behind only the five starters (JF, AA, Cedric Bozeman, LRMAM, and Ryan Hollins).

When you break it down, you have two starters with only one year under their belt (AA and JF), another starter with no experience in college (LRMAM), and then three significant rotation players with no college experience (DC, MR, AA2), and another rotation player with one year on the team, but few minutes that season (LMR). The only difference was the presence of two seniors: redshirt senior CB (coming off a season off due to injury) and true senior RH.

The question then becomes: does CB and RH and their experience as seniors make the difference between a woefully inconsistent team (like this year’s edition of the Bruins) and a team one game short of winning banner #12?

My answer is a simple no. First, CB was coming off of injury, so there was a lot of rust to be shaken off. Moreover, his prior college experience almost overwhelmingly came at PG. With JF running the show, CB was moved to the wing. New position, one where he has minimal (if that) experience while in college. Second, CB to be equates to Malcolm Lee, the captain of this team and the most focused player on this Bruins’ squad. During that 2005-06 season, CB averaged 27.4 minutes per game, scored 7.6 points per game, 3.3 rebounds per game, and 2.3 assists per game. Lee, a true junior (so only one year less of experience than CB), is averaging 32.9 minutes per game, 13.0 points per game, 2.9 rebounds per game, and 2.1 assists per game. Based on those numbers, I’d say the advantage goes to Lee. But even without the numbers, Lee, when compared to CB, is a focused, experienced, mentally-tough basketball player who is committed to playing defense and within himself on offense. If anything, when comparing CB and Lee, in terms of experience, the advantage goes to Lee (who also had more years with Howland and his system than Bozeman did; in fact, Bozeman almost gets negative experience points for having to deal with that retard Lavin).

That only leaves true senior RH versus true freshman Josh Smith. If you compare the numbers, Smith is the better center, by a long shot. More points per game (10.6 vs. RH’s 7.0) and more rebounds per game (6.5 vs. RH’s 4.8). RH was a good role player and he had a great run in the tournament. In terms of experience, it’s not like Hollins had some crazy number of minutes: he was often a reserve or role player before his senior year, and in fact, the year prior (2004-2005) he was sitting behind Michael "Stone Hands" Fey (Hollins only started 6 games that season). Yes, technically, RH is the more experienced player compared to Josh Smith, so let’s give the advantage there to the 2005-2006 team (even if it’s a marginal one).

So, now we’re left with the question of whether Hollins versus Smith made the difference. We all know the answer to that.

If anything, this UCLA team is more balanced than the 2005-2006 team. If you look at the stats from that magical ride to the title game, the team relied almost exclusively on JF, AA, or to a lesser extent, LRMAM, for points. It was pretty much a two-man show and the other guys were key role players.

The bench players in 2005-2006 were much better contributors though (DC, MR, AA2, and LMR) than this year’s bench rotation guys (Brendan Lane, Anthony Stover, and Tyler Lamb). But like I said, DC, MR, and AA2 were all true freshmen. Lamb is the only true freshman of that group. Stover is a redshirt freshman and Lane is a true sophomore (like LMR was). So, if anything, bench experience shows this year’s team has MORE experience on the bench than the 2005-2006 team.

At it’s core, the 2005-2006 team relied on two stars: JF and AA. They were the engine that made UCLA run. The other guys were all contributors who filled their respective roles perfectly. This team, if anything, is really a three-man core: Lee, Nelson, and Honeycutt.

Lee has shown all the focus and heart that we’ve seen in AA and JF. Honeycutt and Nelson, on the other hand, despite having the same EXPERIENCE as JF and AA, have nowhere near the heart and focus of AA and JF.

So yes, saying it’s inexperience is a weak cop-out BS answer that sycophants are using to make excuses for a Bruins squad that has often been mentally-soft, unfocused, and weak.

In other words, despite injuries (which, if you go through a lot of Nestor's old work in the BN archives, you'll see the 2005-2006 squad had plenty of them) and being built around a core of underclassmen (JF and AA vs. Honeycutt, Nelson, and Lee), this team has no excuses for not going deep into March Madness.

If these guys play to their potential, focus on committing to Ben Ball, keep themselves mentally in-check, then there is no limit to what they can achieve.

And if they don't believe me, they should call up a few guys named Arron Afflalo, Jordan Farmar, Luc Richard Mbah a Moute, Cedric Bozeman, Ryan Hollins, Michael Roll, Darren Collison, Alfred Aboya, and Lorenzo Mata-Real. I hear they know a little something about making a deep tourney run with a class built around underclassmen.