Bumped. If others have more extensive takeaways from Saturday's spring game please feel free to share them via fanposts. We always appreciate these notes. - BN Eds. 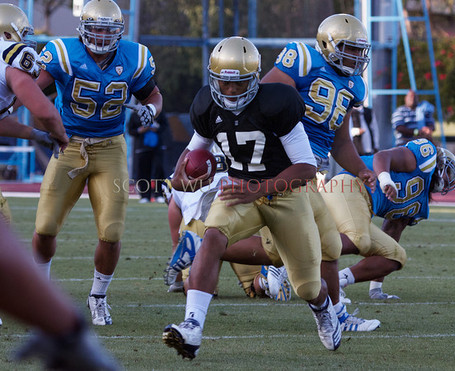 I had several takeaways.

First, Brehaut played with more confidence than I recall last year. But on two occasions when the play was a fade pattern, he failed to get the ball onto the receiver’s outside shoulder. He may have been rushed. (More about that later.) Both passes were into the end zone and neither were complete.  Richard was clearly rushed on the second fade pattern (thrown into single coverage) and the receiver was hit by the ball in the hands (don't you hate it when that happens) but only after turning his head and seeing the ball was in the air and about to arrive like now!  It was a combination of having to get rid of the ball because the defense was entering the backfield and timing being off by an hour.  Last fall in the disastrous game against southern cal in the Rose Bowl, we got a wee bit of momentum off of a turnover. We came back from the turnover with a fade pattern towards the south end of the Rose Bowl on the east side line (in front of the alumni section) and Richard threw the pass on the receiver’s inside shoulder into double coverage. Guess what? Yeah, one of the southern cal student athletes intercepted the pass thrown on the wrong side of the receiver and what little momentum we had turned into nomentum. CRN was so irate he stormed onto the field halfway out to the hash mark to start berating poor Richard and followed him off the field every step of the way to the bench "commenting" loudly and directly on fade pattern fundamentals.  We can get killed by breakdowns like this when it comes to fundamentals and Richard has got to get this right. But still he threw some fine passes and will win some games for us this fall.

One caveat about the QB play.  The quarterbacks, who wore black jerseys, could not be tackled--essentially it as was smash mouthed football for everybody but  two hands touch below the waist for the QBs.  How they will play when they know they can get their heads handed to them remains to be seen.  By that I mean, Richard looked better than he did last year to me (who never played a down so take my views with a whole salt shaker).   Whether he will have the same crispness and consistency when he has to run for his life--we'll see.  (This applies to my views of Hundley too which are below.)  And it may be Richard will not be starting as Prince will be in the mix next September.

Second, the defense was really fired up when a solid defensive play was made. They became vocal and you could hear the hootin’ and hollerin’ on the other side of Drake Stadium.  They were so loud no doubt some of the dweebs in the dorms were upset because their study of Shakespeare's influence on game theory in modern Tibet was interrupted by the defense going ape over a disguised safety blitz off of the weak side.   Football is a game of passion and emotion.  The defense had that last night

Third, the 17 year old pride of Chandler, Arizona, Brett Hundley, played the second most amount of time at QB. He aired out 2 passes that went maybe 55 yards in the air. The first one missed anybody by 10 yards. The second one hit the receiver in the hands and the numbers and due to great ATV-like defense (I can’t remember who was the defender) the ball ended up on the ground incomplete. Both passes looked great while in the air and with time will look great being caught.

Fourth, CRN was gracious after the game thanking the crowd for showing up. Although he always does that, it is a classy thing to do because a couple of thousand people cared enough to drive to Westwood to watch a troubled football program try to get off the ground and start winning. He admitted the offensive line was a hurting dude with injuries (with Baca, Sheller etc. injured and not playing (Baca, using crutches and wearing what looked like a cast watched the game from a high jump pit)) and expected the OL play would be better when we open against Houston. That may explain some of the rushed QB decision making and passes. Then he said that next year there there will the first PAC-12 champion and there was no reason why it shouldn’t be UCLA. Hope springs eternal.

Last add on CRN.  And this is just my opinion based on what I have seen.   He has lost some of his ebullience.  He remains relentlessly optimistic and True Blue.  But the reality of a losing record coaching at a school he loves has eaten away at him and his confidence.  Sometimes he cannot even look a reporter in the eye when answering questions.  His post-game comments were enthusiastic and he was genuinely grateful we showed up but the price of ignominious losses and firing friends has taken a toll IMHO.  He may dispute that (and if I am wrong, I apologize in advance--I love you CRN) but it sure seems that way to me and did last night.

Fifth, it was a beautiful evening to be a Bruin. The campus was gorgeous. We looked across Drake Stadium directly at Janss Steps and Powell and Royce Hall. It was breathtaking. We were educated at a special place. We are the luckiest people on Earth-we are Bruins.