Bumped. This is awesome. - BN Eds.

[In case it is not obvious, this is satire. Having exhausted myself with, as Mexibruin says so well, my own controlled folly--futile letters to the AD and Chancellor's offices, postings and readings on Facebook, etc. ad nauseum--I thought I'd relieve some frustrations with good, old-fashioned ridicule.]

In a surprise announcement, UCLA officials said that the Morgan Center had completed design of a brand new, on-campus dormitory for UCLA students. The new dormitory will house an additional 1100 students.

"We are pleased with the Morgan Center's ability to maximize revenue in their planning and design of the Pauley Renovation," said a spokesman for the Chancellor's office, who asked not to be named. "We think they have brought a similar creativity to the design of the new dormitory."

This would be an understatement. The new dorm design is nothing, if not creative. Said a spokesman for the Morgan Center, who insisted on anonymity, "In today's economy, we have to think outside the box. Students don't want us to raise tuition, and alumni and donors are tired of us hitting them up for more money. What's left, but the private sector?"

"So, we've reached out to private investors whose business interests coincide with those of UCLA," continued the spokesman. "It's going to be a new era of student housing. We think that other universities will look to us and adopt our model in the future. We call our new program 'Student Housing In Transition.'"

The program will yield a combination dormitory-hotel structure, with students and hotel guests in separate sections. "There is a shortage of upscale hotel suites in Westwood," said the spokesman. "By thinking creatively, we were able to meet that need while simultaneously meeting the need for more dormitory rooms for our students."

When pressed for an illustration, the spokesman grudgingly provided the "preliminary illustration" below. "Keep in mind," he said, this is only a rough sketch. The final product will be much nicer for hotel guests, with carved, solid walnut doors, Roman marble floors and baths, original art, and plants and trees and stuff." 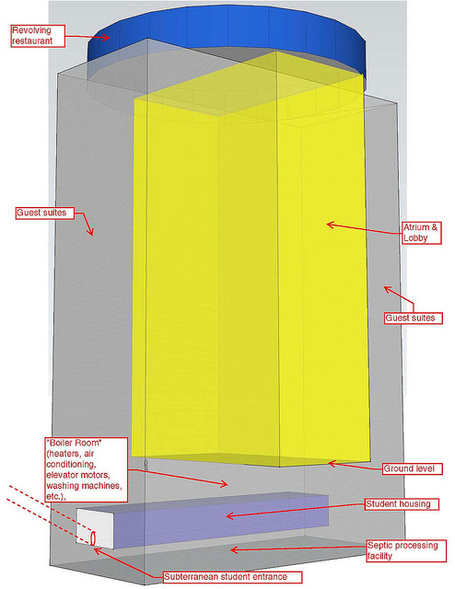 Some of the features of the new dorm may prove to be controversial. For example, dorm rooms will be tall, narrow affairs. "The dorm room design is the direct result of extensive surveys of student preferences," said Mr. X. "We learned that the overwhelming majority of current dormitory residents would like more usable space in their dorm rooms. We also learned that most students did not use the vertical space above their heads in their current dorm rooms."

"So," said Mr. X with pride, "we created six-level bunk beds for students to sleep in, allowing us to triple the number of students we can place in one room. Potentially, we could go as high as eight levels, though the space between bunks might be a bit tight." Such an arrangement would reduce the sleep space from "a generous" sixteen inches with six levels to about ten inches with eight levels.

Another potentially controversial feature is that all students will be housed below ground level. "Again," said Mr. X, we learned through surveys that students overwhelmingly preferred to stay together, in a student-only section. We couldn't very well ask our benefactors to accept subterranean housing, so we made sure to enhance the student experience by keeping them all together. Also, with no windows downstairs, distractions will be at a bare minimum," he said. "We will even give them their own entrance to student quarters--an entrance for students only!"

The most controversial aspect of the design may prove to be the overall layout of the building. Although the number of dormitory beds will be increased by over a thousand, the student section will occupy only 4.3 percent of the building's volume. "Well, we also had to provide adequate space for nearly 152 hotel guests," said Mr. X, "and we learned through surveys that hotel guests strongly preferred large suites, and open-space lobbies and an atrium with large trees. Once again, our use of surveys allowed us to bring forward the very best design possible."

The elevators will not extend below ground level, however. Students will be required to use the stairs in the students-only entrance. But, this was not a capricious design decision, Mr. X claims. "On the contrary, we learned through other survey questions that students overwhelmingly thought that fitness and exercise were important. In any case," the spokesman continued, "placing students above ground was not economically viable."

Students will not be allowed above ground level, in general, for any reason. "Students have their own concerns, namely studying and sleeping," said Mr. X. "Hotel guests, on the other hand, are looking to have a good time. It would not do to disrupt students' studies and rest with the distractions above ground. We're thinking of the students here. Besides, most students would not be able to afford hotel prices."

The new facility will replace Drake Stadium. "We have Spaulding field for running around on. It is a perfectly good field," said Mr. X. "There is no need to duplicate running facilities in two places." In order to provide facilities for both football and track & field, some compromises had to be made. The width of the practice football field will be reduced to a non-standard 117 feet.

Further, the track will be an unusual size, 227.35 meters per lap, and only two lanes. "This should not be a problem," said Mr. X. We've got an entire math department to figure out the beginning and end of various races. Besides, the football team practices on a non-standard-length field, so we aren't introducing anything new to UCLA." All sprint races, including the 100 meters, will involve turns. "One of the great things we've done," Mr. X continued, "is that, with only two lanes, we are adding a brand new element of excitement to races. Racers will not be able to coast in their own lanes, but will have to compete for limited lane resources."

The Morgan Center held back from their most ambitious track design. "We considered making the track a figure eight, which would add even more excitement to races, but in the end, we thought that might be too radical," said Mr. X.

The infield portion of the new track will not be large enough for non-running events--only about 23 meters. This means that jumpers and throwers will have to share space with the football team. When asked about the potential for bodies and objects colliding, Mr. X said "We have thought of that possibility, but we're confident that we can avoid accidents through careful scheduling. For example, the javelin throwers and shot-putters will throw only when a wind sprint or a play has been completed. There is a lot of usable time between plays and when football players are bent over with their hands on their knees."

The new dormitory building will not, by itself, replace all of Drake Stadium. "We wanted to leave room for a three-hole, pitch-and-putt golf course," said Mr. X. "Busy executives and vacationers will want to unwind with a little course play." The golf course will be off-limits to students.

The Morgan Center emphasized that the new construction will be green and eco-friendly. "For example," said Mr. X, "we will install solar panels on the roof that will power up to thirty percent of the flat-screen TVs in the revolving restaurant. We are hoping to increase that to thirty-five percent in the future." The solar panels will not contribute to the restaurant's rotations, however. "It takes lots of kilowatts to move an entire kitchen and dining room, especially with all the guests and heavy plate glass. You can't expect to get that kind of power from a few solar panels," said Mr. X.

What's more, the new construction will incorporate its own waste-processing facility. "Let's face it," said Mr. X, between hungry students with their franks and beans, and the hotel guests with their all-you-can-eat lobster buffets upstairs, there is going to be a lot of waste. We wanted to show that UCLA knew how to leave a small footprint on Los Angeles' waste-disposal system." Large ponds of waste will decompose in shallow tanks, immediately below student quarters. Vapor-proof barriers will insulate the floors above ground from the waste facility. Showing they are greener still, the Morgan Center said that composted waste will be hauled off-site, and used to grow "vegetables, or potatoes, or something" for needy families.

In a final word, Mr. X said "Remember, our number one priority was to provide an enhanced student experience. We think we have done that phenomenally, and for eleven hundred students, no less." In more out-of-the-box thinking, Mr. X said that the Morgan Center was working on "various loopholes" to increase revenue even further, including contracting with native Americans and possibly constructing a casino in the revolving restaurant.