Bumped. This is massive news. Don't forget to sign the petition to get students back on the sidelines today and also join Facebook event asking UCLA students to vote to restore court-side seating. - BN Eds.

Almost as if by divine intervention our mutual struggle has received a much needed boost from two of Coach Wooden's boys. Lynn Shackelford and Andrew Hill have signed our petition! 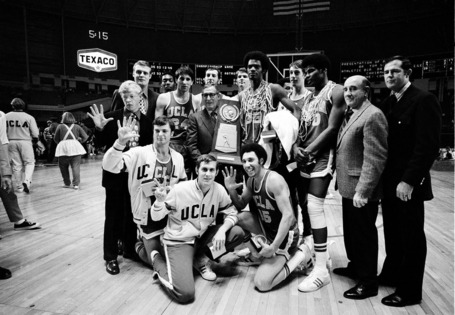 (emphasis in bold is mine)

For the many of us that were not around during Coach's Golden era here is a refresher on one of our true Sons of Westwood.

Lynn was one of those guys that played when freshman did not compete and so his statistics only reflect 3 years. "Lynn was known for his high arching corner jumper and great defensive play. he was the 'one' in the diamond and one defense against Elvin Hayes and Houston in the 1968 NCAA Semi Finals." (1991 Collegiate Collection) This refers to what has become to be known as the Game of the Century. We lost that game but went on to avenge that loss a year later at Pauley Pavilion. The game was a ratings bonanza before the advent of the 24 hour news cycle and went on to prove College Basketball and NCAA Tournament were viable media commodities.

Lynn moved on to play in the ABA in the days before the merger with the NBA. But it would be his eight years as color commentator along side Chick Hearns on Lakers broadcast that would cement his name in Los Angeles Basketball history 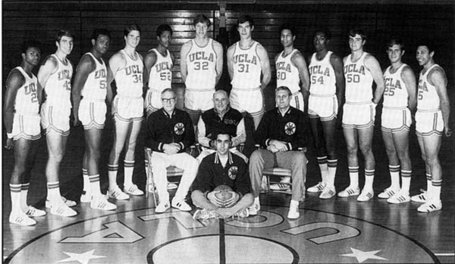 Andy Hill played on 3 National Championship teams including the 1971-72 team pictured above. He is second from the right. Also in this picture are: Keith Wilkes, Bill Walton, Swen Nater, and Larry Farmer. Andy Hill earned both a Bachelor's in Psychology, and a Master's in Education from UCLA. He would go on to serve as President of CBS Productions in charge of development and production for such show as: Touched by an Angel, Dr Quinn: Medicine Woman, Walker Texas Ranger, Caroline in the City and Rescue 911.

In my opinion, the most touching part of Andy's story happened one day when, going about his business, Andy caught himself repeating the phrase, "be quick but don't hurry." In a moment of epiphany he realized he was using one of Coach's mantras. He reached out to Coach and they experienced a wonderful reunion and meeting of the minds. Of that meeting the following book was born. 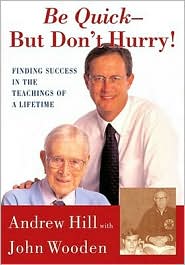 Comments The lack of atmosphere and enthusiasm in Pauley was already a problem. With the students in the endzone it will be even worse. A bad decision in every way.

I was blown away when I found the following email in my inbox one day last week:

Hector:
Thanks for putting yourself out there and making this an issue.  If Coach Wooden were still alive, I cannot imagine he would have endorsed this new plan.  The lack of crowd noise from the old, rich alums who will be in those seats will turn Pauley into a mausoleum.  I have decided not to renew my season basketball tickets because of this decision.

Good luck.  Hopefully you will get them to listen.
Andy Hill
UCLA '74

In my opinion this is some of the most damning testimony we've received in regards to the sad state of UCLA Athletics and the men and women who are charged with guarding and guiding it. If Andy, a player and devotee of Coach Wooden would go so far as to not renew his long held season tickets, we are truly on the brink of disaster. This is not some internet boast or empty threat; I spent an afternoon on the phone with Andy and got to hear first hand how he really feels. It's much worse than it sounds on the comments above. Lynn makes it a point to remind us that Pauley was built for the students. Clearly this is something the Robber Barons in the Morgan Center have forgotten or more likely disregarded.

I encourage everyone to continue to reach out to your classmates, dorm mates everyone you went to school with, fell in love with or went to games with while at UCLA. Don't just ask them to sign the petition; tell them everything that has been going on. There is saying that in life, you have to pick your battles. I choose this one.
Go make us proud students!