With the impending move to the Pac-12, Greg Hansen of the Arizona Daily Star presented his picks for the top 10 athletes in Pac-10 history.  The Pac-10 was originally founded in 1978, so this is his list of top athletes from 1978 to 2011.

Now, we all know that the Pac-10, with the moniker "Conference of Champions", has been home to some of the most amazing athletes in the country's history, and a top 10 list is pretty hard to formulate.  I don't necessarily agree with Greg's top 10, but I can't disagree with it either...

You see, Greg's top athlete in that time span is UCLA's Natalie Williams.  Many of you may not know her name...but guys like Nestor, gbruin and myself saw Natalie in action during our college years.  She was absolutely amazing and was basically in the Daily Bruin at least once a week. 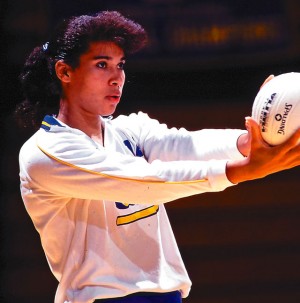 Natalie was 6-2, 200lbs...with a 31 inch vertical leap!  Here are some of Natalie's accomplishments at UCLA:

If you can't get enough, here is an interview from December 2010 when the Pac-10 caught up with her in honor of the conference's 25th anniversary of women's sports.

Not enough?  Natalie also played on the national basketball team that won the Gold Medal at the Olympics in 2000 and at the World Championships in 2002.  And she carried the Olympic Torch in Salt Lake City prior to the 2002 Winter Olympics.

Even at UCLA, with a plethora of unbelievable athletes, you can see that Natalie stands out like no other.

Here are some other athletes that I think you could make a case for (with a slight Bruin bias):

I could go on and on.  Who comes to mind for you?