We started with the ACC.  North Carolina and Boston College ran away as BN's favorite ACC schools.  There seemed to be fairly consistent memories about most of the schools.  I doubt that the ACC would rank very high as BN's favorite non-Pac conference, and I will save the overall conference poll for the last post.  For now, let's move on to the Big 10 (12).  Please, save your "Legends" and "Leaders" jokes for the last post: 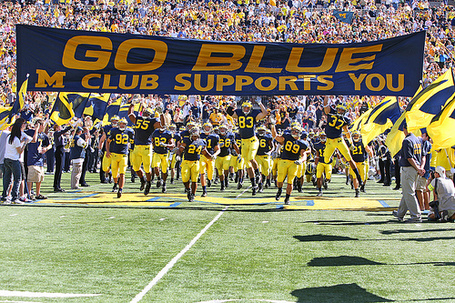 ILLINOIS: Simeon Rice was a freak at Illinois.  He teamed with Kevin Hardy, a damn good linebacker in his own right, to create one of the fiercest defenses in "College Football USA" on Sega Genesis.

INDIANA: I'm too young to remember the winning days.  What I remember was Bob Knight as a sideshow.  Now that he is on TV, "The General" has confirmed my suspicions that his charade was nothing more than a publicity stunt.

IOWA: Flyover U.  The only thing that comes to mind is big ass lineman who probably worked on farms for 20 hours a day before going to college.  Hell, football probably seems like a cakewalk to those guys.

MICHIGAN: I grew up a fan of Michigan.  I could write about a lot of my fondest memories:  the Fab Five, Tim Biakabutuka,  Charles Woodson, the Big House, and of course, the iconic helmet.  However, there is one piece of art that links it all together; "Hail to the Victors."  I've heard it a million times, and it never grows old.

MICHIGAN ST.: Of course, as a fan of Michigan, I was never a fan of State.  But, we can all thank them for Magic.

MINNESOTA: Prior to 2009, watching Minnesota football at home was creepy.  They played in the Metrodome, and the place always seemed about 10% full.  Thankfully, they opened a stadium on campus.  It seemed to work out for them ...  BTW, they also have condiment colored uniforms.

NEBRASKA: It is genuinely strange referring to the Huskers as a Big 10(12) school.  In the 1996 Fiesta Bowl, Nebraska thoroughly destroyed Florida.  Tommie Frazier had one of the greatest performances of all time, including one run where he went Beast Mode on half of the Gators' vaunted defense.  At the end of the game, Nebraska won 62-24, racked up 524 rushing yards, and signaled the peak of the their mid-90's dynasty.

NORTHWESTERN: One of the most beautiful girls that I ever met went to Northwestern.  She was also incredibly rich and out of my league.  They've had some good football teams, but does anyone even notice?

OHIO ST.: Up until this past year, I probably would have said their stickers that look like pot leaves.  Now, cheating, cheating, and more cheating.

PURDUE: We must give thanks to Purdue University.  Long before my time, Coach played at Purdue and was admitted to the Basketball Hall of Fame as a player.