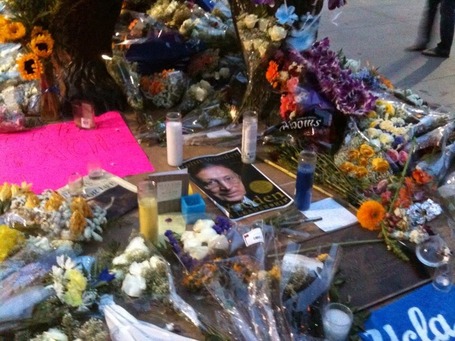 One year ago today the world lost our Intergalactic Treasure. We were fortunate to have him on this earth for nearly 100 years.  Many may not be aware just how fortunate we are. The video after the fold shows us the hand of fate (or something/someone else) and perhaps an example of events in Wooden's life that contributed to the man he would become.

And most UCLA fans know that fate also intervened to the benefit of the Bruins Nation and college basketball as a whole:

The bespectacled former high school teacher ended up at UCLA almost by accident. Wooden was awaiting a call from the University of Minnesota for its head coaching job and thought he had been passed over when it didn't come. In the meantime, UCLA called, and he accepted the job in Los Angeles.

Minnesota officials called later that night, saying they couldn't get through earlier because of a snowstorm, and offered him the job. Though Wooden wanted it more than the UCLA job, he told them he already had given UCLA his word and could not break it.

While Wooden was named the all-time greatest coach, Coach is remembered as the complete man, transcending his legacy as the Wizard of Westwood. Long after their UCLA playing days, Wooden's players realized that along with basketball, life lessons were being taught.

Years after he graduated from college, John Vallely found himself riding in a hospital elevator, trying to stay calm after his 9-year-old daughter had been diagnosed with cancer.

" 'Do not let what you cannot do interfere with what you can do,' " Vallely said. "I couldn't control cancer, but I could control how I reacted … how I could be the best father and the best husband. That thought helped me keep my balance."

Former UCLA star Jamaal Wilkes said, "You listened, but it wasn't until years later, after college, after the NBA, when my life focus began to change on marriage, divorce, children, the business world, that I began to sense how special a man he was," Wilkes said.

LA Times, John Wooden's words live on in the hearts of his admirers

As we remember the teachings of Coach and all he stood for,  John R. Wooden lives on and will be forever young.