Thanks to maccabita4life for the fanshot, I just want to expand on a few thoughts on Rivals' Top 25 recruiting teams of the last 10 years.

Firstly, let's look at the coaches we had in the last 10 years:  Bob Toledo, Karl Dorrell and Rick Neuheisel.

Toledo's classes were actually ranked very well.  If you look closely, it was actually Dorrell's classes that were the outliers (except for CRN's last one, but that was due mostly to few recruits being needed).

Also, the way Rivals does their ranking is way too simplistic.  In order to get the ranking for the last 10 years, they "simply added up where a school finished in the recruiting rankings each year from 2002-11".  The problem with their methodology is that If you recruit, say, the 5 top WRs and the 5 top RBs in the nation, you'll be #1!  Nevermind that your team will suck beyond belief because you didn't recruit anyone else (I'm looking at you KD).  In short, they only take the player's ranking into consideration without taking into account the team's needs.  But still, it's one measure and not necessarily a bad one.  Also, the record ranking can be misleading because it doesn't take into account strength of schedule.

Anyway, with all those caveats out of the way, here is the interesting ranking, which is the difference between the recruiting ranking and the record ranking: 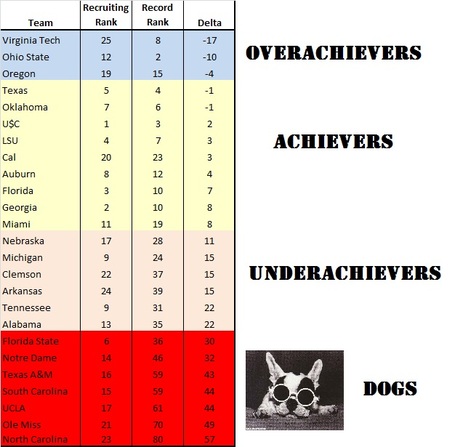 I think instinctively, we all knew this just from following college football for the last 10 years.  Boise State and TCU would probably be at the top but obviously they aren't recruiting juggernauts and generally have a rather easy schedule.  It has been a dismal decade for some traditional football powers, like FSU, Notre Dame, Texas A&M and UCLA, and the coaching drama at those schools has reflected that.  I would somewhat exempt South Carolina and North Carolina, as their program has somewhat turned around after a long history of, uh, sucking.  Ole Miss just can't seem to catch up to its rivals, but I blame their bad ranking fully on Ogre, who could recruit but couldn't coach a flea to jump (except on defense).

The other problem with this methodology is that a recruiting ranking doesn't necessarily translate into a record ranking immediately.  Basically, I think KD benefited from Toledo's recruiting, while CRN got shafted due to KD's shortcomings.  Let's hope the next 10 years see UCLA move up this chart.