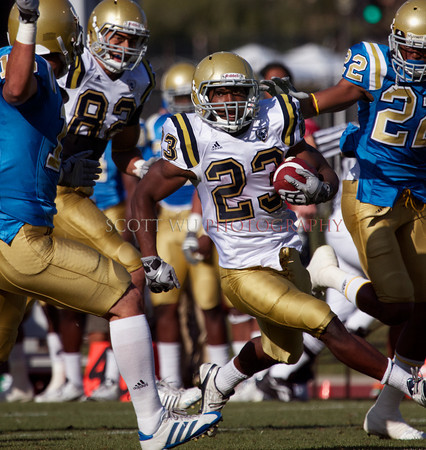 Johnathan Franklin has been named to the Doak Walker Award watch list.  The award is presented annually to the nation's top running back.  The RS junior was U.C.L.A.'s leading rusher last season with 1,127 yards, which made him 37th overall in the country.  Fifty-one runnig backs are included in the pre-season watch list.  The Doak Walker Award for 2010 was awarded to Oregon's LaMichael James (no word whether Will Lyles received any commission on the award).  JetSki was previously named to the Maxwell Award watch list for the nation's best football player.

Center Kai Maiava has been named to the Rimington Trophy watch list for the nation's most outstanding center.   Kai was named to the same watch list last season, but a broken ankle in the preseason scrimmage caused him to miss the entire 2010 season.  The redshirt senior is healthy now (knock on wood) and returns to anchor a Bruins offensive line which has been everything but stable.  A healthy and effective Maiava will go a long way towards providing some consistency in the Bruins previously inconsistent offensive game.  Maiava is one of only 3 Pac-12 centers to be included on the list of 43 players.  The 2010 Rimington Trophy was awarded to Jake Kirkpatrick of TCU.

As noted by B Safety Tony Dye has been included in the Bronko Nagurski Award watch list for the nation's best defensive player.  The hard hitting senior is the latest in a long list of standout defensive backs from Westwood which goes back to the days of Kenny Easley and continues through recent standouts Alterraun Verner and Rahim Moore and now Dye.  The leading tackler on the Bruins defense in 2010, Dye has already been included in the watch lists for the Benarik Award for the nation's best defensive back, and the Lott IMPACT Trophy for the top collegiate defensive player.  The 2010 Nagurski Award went to Clemson defensive end Da'Quan Bowers.

Linebacker Sean Westgate has been named to the Rotary Lombardi Award watch list, awarded to the best defensive player among linemen and linebackers. As a starter for the 2010 season, the true senior was second on the Bruins in tackles behind Dye.  Though slightly undersized for a LB, his tenacity and motor have made him a stalwart on the Bruin defense.  Westgate also contributed heavily on special teams for the Bruins in his first 3 years also.  The 2010 award was won by Auburn defensive lineman Nick Fairley.

Congratulations to these four Bruins on their well-deserved preseason honors, and there may still be a few more to come.  This is further evidence of the high level of talent that Coach Neuheisel and staff have recruited to Westwood over the last few years.  But more important than the preseason honors will be the play of all the Bruins on the field this season.  Hopefully that talent will live up to the pre-season accolades and translate to success on Saturdays (and one Thursday).  If our players can match their expectations, it should be a successful season for the Bruins, and we can look for these 4 players to be in the running for finalists for these awards at the end of the season.