We started with the ACC.  North Carolina and Boston College ran away as BN's favorite ACC schools.  We then moved on to the B1G 10, where Michigan ran away from the rest of the conference as BN's favorite school.  Then we jumped down south, where Tennessee and its hatred of Kiffin prevailed as BN's most-liked school in the SEC.

Let's move back to the midwest, shall we.  Big XII, anyone? 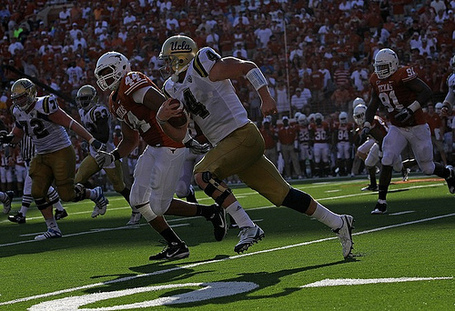 The game continues with the obligatory poll after the jump.

BAYLOR - The Bears will forever be linked to the Dave Bliss murder scandal in my mind.

IOWA STATE - Around the same time Dave Bliss was involved in covering up a murder, Larry Eustachy was busy trying to sleep with coeds.  What a strange time.

KANSAS ST. - Bill Snyder is a hell of a football coach.  If you don't believe me, take a look at his coaching tree.

MISSOURI- One of those schools that seemingly can't get its programs over the hump.  They've been good but not great for what seems like forever.  They tried cheating (Quin Snyder) and innovating (Gary Pinkel), but they just can't get over the hump.

OKLAHOMA - I've never been a fan of OU, mainly just because I've always liked Texas.  The Roy Williams play was one of the best plays that I've ever seen.

OKLAHOMA ST. - Barry Sanders went to Oklahoma St.  If you didn't like watching him run, you don't like football.  He was built to be a running back, and I've still never seen anyone run the way he did.  He was one of a kind.

TEXAS - For some reason, that picture with the U$C cheerleader cheering as Vince Young scores the winning touchdown still cracks me up.  Ricky Williams and Vince Young stand out.  As do their iconic helmets, outstanding color scheme, and tradition of winning.   Yet, for some strange reason, UCLA has had some serious ownage over UT.  I'm sure the Horns will come out for revenge this year, but didn't they do the same thing last year?

TEXAS A&M - The 12th Man.  Between 1990-1995, A&M lost a total of 5 games under R.C. Slocum.  They've been through some tough times recently, but that home field advantage always makes them tough.

TEXAS TECH - Pirates, anyone?  Mike Leach is pretty amazing.  I don't know what his was thinking when he titled his book, "Swing your Sword", but he does his thing.  I dig it, and I know Tech is going to find it hard to reach the heights that Leach could have taken them to.

What is your favorite Big 12 school?