The following is a brief, primarily UCLA-centric account of my Monday morning at the Adidas Super 64 tournament here in Vegas.

8:56AM – I arrive at Rancho High bright and early to catch Shabazz Muhammad and his Dream Vision squad against the DC Assault.  Along with Shabazz, Dream Vision features three other UCLA targets in Winston Shepard, Robert Upshaw and Xavier Johnson.

9:01AM – There’s a strong UNLV contingent in the stands with dreams of Shabazz and a return to glory dancing through their heads.

9:03AM – Moments after tip-off Winston Shepard throws down a nice little breakaway dunk thanks in part to some less than intense D on his part.

9:08AM – Shabazz goes all Dr. J with a tomahawk jam on the break.  In the two games I’ve watched, I’ve noticed that he seems equally comfortable and explosive jumping off of one foot or two.

9:15AM – After fumbling a pass for a turnover and getting shook on the other end, Robert Upshaw gets yanked and heads straight for the Gatorade cooler.  Shades of Bobo.

9:18AM – Scanning the opposite bleachers (aka the college coaches section), I notice a decided lack of star power relative to Saturday when every big name in the business was there for Dream Vision vs. Double Pump Elite.  At the moment, the most recognizable face in the crowd is Duke assistant Steve Wojciechowski.  Maybe it’s the Duke hater in me but at this point I think to myself "what the hell did Wojo ever do to be instantly recognizable?"

9:30AM – DC has a one point lead at the half and it would be worse if not for some inspired play from Dream Vision back-up big man Ronnie Stanley.  Stanley’s ability to dominate the interior makes Upshaw look that much more ineffectual in retrospect.

9:33AM – Finally some star power on the opposite side of the building.  CBH has arrived.

9:54AM – Winston Shepard gets a steal and goes coast-to-coast for a pretty finger roll.  At 6’8" 200+ with athleticism and solid handle he’s the only player in the game that I would call prototypical for his position (small forward).

10:05AM – A stretch of domination from Shabazz includes a turnaround floater, a finger roll and a dunk in traffic; it culminates with a drive that draws a DC Assault triple team.  Shabazz easily spots the open man, Xavier Johnson, for a nail-in-the-coffin dunk.

10:20AM – With no UCLA targets playing in any of the three 10:20 games I decide to grab an early lunch at the concession stand.  Hot dog, nachos and a Pepsi for a total of $4 - I love high school sports!

10:50AM – I’ve moved over to the North gym to watch Javan Felix.  The New Orleans point guard was the cover boy for yesterday’s ESPN Recruiting page after a strong showing on Day 2.  It’s easy to see why coaches are falling for the kid as he directs traffic from the top of the key.  He’s the first point guard I’ve seen in two days that brings to mind phrases like "floor general" and "quarterback".  As of yesterday morning, Felix liked us and Texas.  I’m not sure what he’s thinking after the signing of Doiminic Artis.

11:04AM – Overheard at the ticket taker stand of Rancho North Gym, "we could really use a sign that says ‘Shabazz is in the other gym’ "

11:12AM – The Atlanta Celtics enter the gym and almost immediately Jordan Adams spots my UCLA shirt and flashes a big smile.  I give him the thumbs up.  He’s rocking blue and gold headphones.  Nice.

11:20AM - I point out Adams to my girlfriend and she says, "it’s another Josh".  I ask if she meant Shipp or Smith.  She meant Smith and was referring to Jordan’s, um, let’s say doughy physique.

11:39AM – About two minutes into the game Shaq Goodwin pulls the old "point-in-the-air-spin-off-your-man-catch-the-oop-and-dunk" move.  The original Shaq would have been proud

11:40AM – Adams hits his first shot. Tubby or not, the kid has a pretty j.  He also moves well without the ball, using screens to create open space for pull-up jumpers.

11:45AM – The Celtics are playing a zone and I can’t help but wonder if it has something to do with the conditioning of Goodwin and Adams.

12:01PM – Just when I’m thinking that the Celtics coaches are letting Goodwin float around the perimeter too much, Shaq drains a three.

12:04PM – I want to stick around for the rest of the Celtics game but having passed Andre (the Giant) Drummond in the hall a few times over the past two days I’d be remiss if I didn’t catch at least a few minutes of his game back in the Rancho Auxiliary gym.  No joke, the kid is put together like a bigger version of Amare Stoudemire.

12:16PM – I step into the Auxiliary gym just in time to see two quick fouls by Drummond.  I could swear that one of the coaches of the opposing squad pops open a Champaign bottle as Andre heads to the bench.

12:18PM – I realize that the opposing squad is the So-Cal All Stars. I find it sad that none of their players are headliners at this event.  Back in when I first started coming to these things, the SCA team featured Kevin Love, Brandon Jennings, Chase Budinger, Taylor, King, Renardo Sidney, Daniel Hackett, James Keefe and Malik Story.

12:26PM – CBC, spearheaded by point guard Kris Dunn, has actually gone on a run without its star and leads by 20 when the big man returns.

12:34PM – Andre Drummond exits the game leaving a wake of battered and demoralized Southern California All Stars behind him.

12:58PM – After another stop at the concession stand I head back to the main gym where there is now a D.J. spinning tunes.  He plays "King of Rock" by Run DMC and I stop to contemplate the fact that most of today’s featured prospect were a good 10 years shy of being born when that song came out.  I feel very very old at that moment.

12:59PM – Continuing the old school theme, I spot about a dozen kids in the stands rocking high top slanted roof fades with blonde streaks in them like they just stepped off the set of New Jack City.  Seriously, how does a kid in the year 2011 suddenly decide that he wants to look like one of Big Daddy Kane’s background dancers?  Did they go through their dad’s high school yearbooks and say to themselves, "hey, that haircut was a good idea"? Baffling.

1:02PM – Back to basketball.  The first basket of the one o’clock game is scored by a behemoth with impressively light feet and I’m immediately reminded of the scene in The Blind Side where Big Mike is discovered by the private school football coach while playing basketball.  I don’t know if this kid even plays football but I want him protecting Brett Hundley.

1:03PM – A quick internet search reveals that the kid does in fact play football and is according to Scout the top offensive tackle prospect in the country.  His name is Arik Armstead and he’s committed to U$C.  F***in’ figures.

1:28PM – Gabe York of the Compton Magic Elite throws down his third ridiculous dunk in ten minutes and I come to the frustrating realization that for two years in a row my favorite AAU player is an Arizona commit.  Just like Nick Johnson last year, York is a pure scorer that can pull up from 25 feet on one possession and then bash on a big man the next time down the floor.  The only bright side from a Bruin perspective is that both York and Johnson are undersized for the 2-guard spot.

1:45PM – With no Bruin prospects schedule to play until the early evening I decide to call it a day.  Before I go, I notice the t-shirt of the kid sitting in front of me and I think to myself, maybe there’s hope for these little goofballs after all. 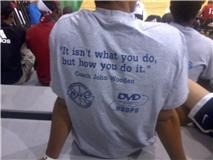