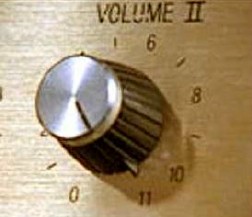 What we do is if we need that extra...push over the cliff...you know what we do?
Put it up to eleven?
Eleven. Exactly. One louder.

The SB Nation Conference Re-Draft finally (Team Speed Kills = irony) came back around to our turn and with the 60th and 61st picks, the Twelve Pack has added the University of Minnesota and Purdue University.

The Pack Twelve has just pushed over the cliff. And it's loud! Here's how it looks: 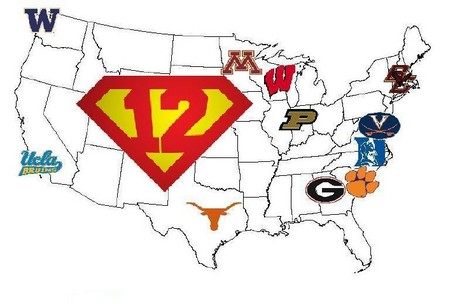 Swing by the great Minn & Purdue blogs at The Daily Gopher and Hammer & Rails and welcome them to the conference.

The Minnesota Golden Gophers were a great value to still be on the board for us. Minneapolis/St Paul is a top 15 TV market and the Gophers' football program was the #25 revenue sport, the highest remaining on the board, and a steal with pick #60. With the fourth largest student enrollment in the nation, revenues can only go up as the marquee programs from the 12-Pack travel to the Twin Cities. Minnesota is an established rival with its neighbor and now conference-mate Wisconsin and they share the longest continuous D-1 football rivalry. While Minnesota's football team has struggled recently, the addition of their gorgeous brand new open air (read: cold in November!) TCF Bank Stadium should provide some bounce for the program and a strong home field advantage. Minnesota has solid basketball, and is a perennial hockey powerhouse, further boosting the 12-Pack rivalries with Wisconsin and Boston College. The Golden Gophers' hockey programs add 8 National Championships to the 12-Pack's embarrassingly gaudy trove of titles. Minny's academics fit well with the 12-Pack, as the 2010 Academic Ranking of World Universities placed U of M at #28 in the world and 9th in U.S. public schools Plus, there is the eerie geometric fit of the U of M logo between the UW and Wisconsin logos. (I'm looking for Montana-Western with our next pick...)

Famous Golden Gopher alumnus, Herb Brooks Do you believe in miracles...? Welcome to the Gophers!

The Purdue Boilermakers also add great value to the 12-Pack, giving us strong links to the Chicago (#3) and Indianapolis (#25) markets and solidifying the 12-Pack presence in the midwest. Purdue's location also adds a regional rival for Minnesota and Wisconsin. And like Minnesota, Purdue athletics was recently a top 30 revenue earner. Purdue highlights the best basketball program in hoops-crazed Indiana (Sorry, Knight). In fact, the Boilermakers have won more men's and women's Big Ten Basketball Championships than any other Big 10 school. Purdue has had several strong football teams recently, and with recruiting inroads to Chicago and now the Twelve Pack strongholds in Texas and California, their program has lots of potential to return to that top level. Finally, Purdue, tied with Georgia, was ranked 56 in the latest national university USN&WR rankings. All-around strong TV markets, revenues, athletic traditions, and academics...Yup, sounds like a Twelve Pack school.

Here's the updated draft board (which I once again stole from Brian @ BCI):

As you can see, from top to bottom, no conference has better markets, bigger revenues, higher academics, more championships, better non-rev sports, and all around excellence (including co-eds) than the Twelve Pack. This conference goes to eleven.