We started with the ACC.  North Carolina and Boston College ran away as BN's favorite ACC schools.  There seemed to be fairly consistent memories about most of the schools.  We then moved on to the B1G 10, where Michigan ran away from the rest of the conference as BN's favorite school.  We'll now jump to the south.  Let's see what everyone remembers about the SEC. 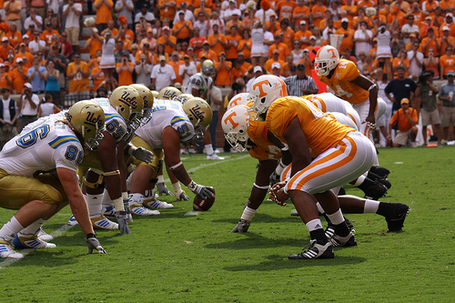 Tennessee VS UCLA 190 (via jgtitans)

ALABAMA - There is a lot to talk about here, as there will be with many of the SEC schools.  Bryant-Denny Stadium has always been one of my favorite looking stadiums.  It is always rocking, and definitely on the list of places I need to go to watch a game.  Their helmets are unique, and their color scheme is nice.  Nick Saban is the perfect SEC coach- gentlemanly with a hint of dirt.  That said, Bear Bryant's hat is synonymous with the Crimson Tide.

AUBURN - Dogs do not like Auburn players.  Whether is police dogs or mascots, they seem to be in the crosshairs.  Maybe it is due to the fact that Auburn's mascot is a feline.  Maybe it is retribution for the school's history of scandals.  Or maybe it has something to do with Bo Jackson.  I read his book when I was young and the only thing that I remember about it is that he tortured dogs when he was young.

FLORIDA - I don't want to talk about it.  Really.

GEORGIA - Between the hedges.  Another great looking SEC stadium that rocks every game.  I remember Hines Ward playing QB for the Bulldogs.  And of course, who could forget Herschel Walker, even if you're like me and have only seen the ESPN classic version of his prime.

LSU - Death Valley is LSU.  Saturday night football at Tiger Stadium is next on my list of venues to see.  It's before Alabama, Texas, and the Big House.

OLE MISS- Of course I think of Eli Manning, but I doubt that anyone who read The Blind Side has anything pop into their mind other than Michael Oher, Sean and Leigh Ann Tuohy, and of course the comic descriptions of that cheating D-line coach across town.

MISSISSIPPI ST.- William Nuschler Clark, Jr.  That might not go over well in Dodger country, but frankly, I don't give a damn.  Will Clark was a badass.  He had one of the prettiest swings in baseball, and had Jerry Rice gone to Mississippi St rather than Mississippi Valley State, my two childhood hero's would have both been Bulldogs.

SOUTH CAROLINA - The real USC.  They were awful forever, then they hired Lou Holtz and then the Ol' Ball Coach and have become a pretty damn good team.  It isn't the fact that they hired Spurrier that gets the nod, it is the way they hired him.  Although Augusta National Chairman Hootie Johnson denied the story, rumors swirled that the Chairman (former South Carolina football player) offered the Ol' Ball Coach membership if he agreed to coach the Gamecocks.

TENNESSEE- The team that we would have played for the National Championship had we beat Miami.  I always wanted Peyton Manning to beat the Gators, but he just couldn't quite get it done.  It took Tee Martin to finally beat the Gators ... WTF?

VANDERBILT- My old physical therapist's son plays baseball there.  He was drafted by the Tigers in the third round, so he'll get a pretty solid payday.  Other than that, it's the school that bring's up the SEC's overall GPA.

What is your favorite SEC school?