HT to the guys at BC Interruption for leading us to this post.

We have discussed at length whether UCLA is a football or basketball school.  Most us know the UCLA football history so there is no need to rehash what we have already demonstrated, which is that despite all the basketball championships, UCLA has a rich (though not necessarily consistent) history of success in football.  So any time someone from the (east coast) school of journalism calls UCLA a basketball school, we have to roll our eyes and debunk that myth.

That being said, there are different ways of looking at the issue:

Reputation:  what is the tradition in each program?  The problem with this is, obviously, it tells us nothing about the current status of the school.  It's a subjective measure, but the first word that comes to mind when you say "Notre Dame" is football.

Winning Percentage:  this is a more objective measure but it could be skewed by the school's history, one way or the other.

Championships:  another objective measure, but far too drastic in my opinion as it would neglect too many great programs that don't necessarily win championships.  Perhaps including conference championships would make this better.

The post at Basketball Prospectus examines yet another measure.

This is what the author is doing for his analysis:

I obtained the last six years' worth of season attendance figures for every school with a football and basketball program competing in the ACC, Big East, Big Ten, Big 12, Pac-10, and SEC. For each season a capacity percentage was calculated for each school's football and basketball teams.  I then averaged all of the seasons together to arrive at a six-year "capacity used" average for both sports.

The result is the following matrix: 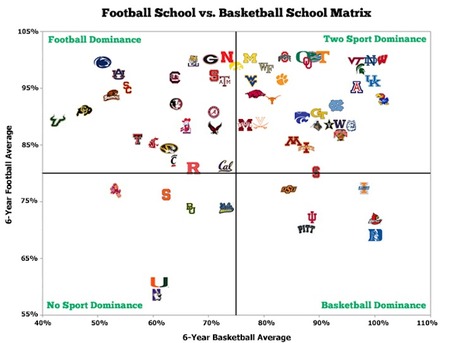 The results are pretty much as you would suspect, with a few surprises.  We can discuss all of those, but as with anything the focus here is on UCLA.

Firstly, well, we all know about the implications of playing in the Rose Bowl.  The author's assumption is as follows:

Programs design arenas and stadia according to realistic assessments of popular demand.

He qualifies that, knowing that some teams play in NFL venues...but that would actually help UCLA in this matrix, as most NFL venues are smaller than the Rose Bowl.  75% attendance at the Rose Bowl means roughly 68,000 people.  97% attendance at the Wake Forest stadium means 30,500 people.  So clearly, this is not a perfect measure, but it works for most schools.  UCLA happens to fall in those few exceptions.   It would be nice to have this all the time, but nevertheless, given the sad sorry state of UCLA football in the last 6 years, this is pretty good.

What is damning however is the attendance for basketball.  The last 6 years include the three runs to the Final Four.  And even with those, we couldn't reach 75% attendance at Pauley?  That's pathetic and it can't just be explained away by the performance of the last 3 years.  Our team deserves better than this.

Anyway, a cool way of looking at an issue that brings out passion in many fans.  Combining all the elements would probably provide the right picture, but in the end, it's no one's business to tell another school who they are.  Go cheer for what you love!