There have been some pretty bad ideas in college football.  Pac-10 refs.  Legends and Leaders.  Lane Kiffin.

But now there is this.

The Cy-Hawk trophy, given to the winner of the annual Iowa - Iowa State showdown has been updated, and was recently unveiled at the Iowa State Fair. 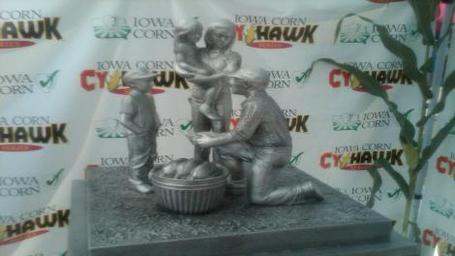 Per the local news site,

"This is literally a work of art representing the people and characteristics that are uniquely Iowan." said Craig Floss, CEO for Iowa Corn. "Just as the trophy reads, we are honest, hard working, family and community orientated people. Iowa’s corn farmers are proud to bring this work of art to the new Iowa Corn Cy-Hawk Series football game and we look forward to sharing it with the people of Iowa."

If the idea was to create a trophy so terrible that both teams actually strive to lose the game for fear of having that thing for a year, then well done, sirs, well done.

I could go on and on, but the folks at EDSBS have already done so, so I'll just link you over there.

Lord Stanley is rolling in his grave.

But just in case the Cy-Hawk trophy wasn't hilarious enough on its own,

There will be separate trophies for women's and men's basketball and the overall series winner.