We're almost at the end of the off-season, folks.  We've gone through each of the BCS conferences (sans Big East) and picked our favorite school.  Why not have a winners bracket?

We started with the ACC.  North Carolina and Boston College ran away as BN's favorite ACC schools.

We then moved on to the B1G 10, where Michigan was the clear favorite.

Then we jumped down south, where Tennessee and its hatred of Kiffin prevailed as BN's most-liked school in the SEC.

Back in the midwest, Texas was the clear winner from the Big XII.

In the PAC-12, California was the winner followed closely by Stanford.

Before we vote on our favorite non-UCLA school, let's do one last name association.  What comes to mind when you hear each conference name? 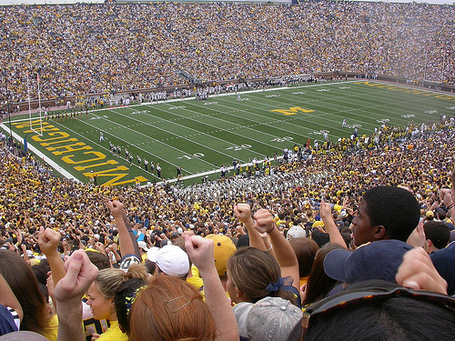 ACC - I assume most people will immediately think of Duke v. North Carolina.  It isn't surprising that one of the best basketball rivalries is synonymous with one of the better basketball conferences in the country.  I, on the other hand, immediately recall two things.  First, Florida St. and their dominance over the conference when I was young.  I don't remember the specific stat, but I think Florida St. went close to 10 years without losing a conference game.  Second, the ACC basketball tournament.  I haven't watched lately, but it used to be some of the best theater around.

BIG EAST - ESPN greatly overrates the conference's strength in basketball, but the one thing about the Big East that you can't discount is ... well ... it's strength.  The Big East consistently has the biggest, strongest power forwards in college basketball.  Some conference games are utterly unwatchable due to the constant fouling and rough play.

B1G 10 - While I might not think of Duke v. North Carolina when I think of the ACC, I definitely think of Michigan v. Ohio St. when the Big 10 is brought up.  The specific game that comes to mind is the 1995 game when Tim Biakabutuka broke off 313 yards and Michigan upset the undefeated Buckeyes.

BIG XII - Texas.  Prior to this offseason, I would have probably talked about the Texas-OU rivalry, but now it's just Texas.  They own the conference, and it looks like a matter of time before the Big XII implodes.

PAC 12 - Of course, who could think of the PAC 12 without instantly recalling Wooden's Dynasty?  In my mind, Wooden's dynasty is something that the entire conference should be proud of.  Other than UCLA related memories, I think the PAC always had a wide open nature.  Whether it be fast breaks in basketball or wide open passing attacks in football, the PAC is anything but conservative.

SEC - How could anything but football come to mind?  The South is football crazed, and the atmospheres around the country simply do not match the South's intensity.  They have night games, 90,000+ rabid fans, and plenty of traditions.  On the other hand, they have oversigning, plenty of scandal, and fans willing to poison trees.

What is your favorite non-UCLA school?