I hope everyone on the East Coast is safe and sound.  If you are thinking of braving the storm, don't.  I've been in a hurricane in Florida.  It's not that the rain or the wind is scary, it's just that there are things flying around and you never know what would end up impaled in your eye, or flash floods suddenly trapping you.  Just saying.  Be safe and don't go outside.  For once, you have an excuse!

With our Public Announcement out of the way, we'd like to share with you our humble Pac-12 predictions for the 2011 football season.  This is really just for fun and out of curiosity.  Before any of our conference opponents get in an uproar, just know that we cannot possibly know everything about every team.  But we think we know what is going on generally in the conference to make some educated guesses.

This year, it seems pretty clear that there are two elite teams in the conference.  That is also reflected in the preseason polls, with both Oregon and Stanford in the top 10.  Some believe Stanford is overrated, but with a top-notch quarterback in Andrew Luck and continuity with their starters, you can never count out a team.  It will certainly be interesting to see how the team performs without Jim Harbaugh.  Unfortunately for them, those two teams are both in the North Division, so they will not be able to meet in the championship game.

First of all, the predictions were made using only conference games, so this is Pac-12 specific.  Even that in itself is not easy.  When you start thinking about home vs. away, time of the game, previous bye weeks...it starts getting hairy.  But who cares, it's just for fun.

Secondly, I am only going to provide the specific W-L results on certain games.  There is just no way to provide all the results.

Thirdly, 8 of us frontpagers participated in this little poll, and the results are based on average win-loss record.  Not a huge sample size, but there is no time to get everyone's opinion in the community.  The folks at CBG came up with a public poll, it's impressive but it certainly take a bit of work. 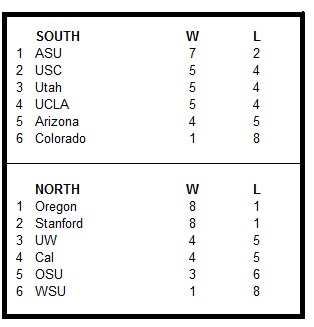 Now remember, this is just based on averages.  From this, we notice a few interesting items:

- 7 out of 8 of us picked ASU to win the conference.  The lone dissent was a pick for Utah

- After that, there is a cluster of teams in the middle consisting of UCLA, U$C and Utah.

- For all the complaining that we hear about this site being negative, it seems we have picked UCLA to finish with a winning record in the Pac-12.  This would almost certainly mean a bowl game for the Bruins, which would be a pretty good season considering we only won 2 conference games last year.  The low was a 3-6 record and the high a 7-2 record.  Out of respect for anonymity I will not name those who made those picks  :)

- As mentioned above, Oregon and Stanford stand out in the division, but what is interesting is that most of us don't think Oregon will go undefeated.  Apparently the game at UW is seen as tricky for the Ducks.

- After those two teams, there is a pretty big drop off to UW and Cal.

- Unfortunately, as most others, we see WSU and Colorado ending up in the basement.  Personally I think WSU will surprise some people (hopefully not UCLA!), but we will see.

- We are completely split on the UCLA vs. U$C game.  It's easy to argue either side.  I personally believe U$C will have a great offense but a not-so-good defense.  Their lack of depth will probably catch up to them too.  But the game is at the crapiseum, so you just never know.

- We are unanimous in a victory against Cal, at home.  I certainly hope that is the case, but on paper that seems to make sense.

- We are unanimous in a loss at Stanford.  No need to explain further.  I do draw some hope from how close the game was 2 years ago, before Rahim Moore got blinded by the sun and had a dumb penalty.  Still, they are a very good team.

With that, I leave it to you all to discuss.  If you want to see how your own predictions will pan out, download and use this spreadsheet here.  Just put an X in the orange cell where you think the team will have a victory (and make sure you don't give an X to the opponent!).

Off to the foxes!  GO BRUINS!