We're in the middle of the inching closer to the end of the offseason, folks.  I'm devoid of anything relevant to talk about, so why not play some name association with other schools?  What is the first thing that comes to mind when it comes to these schools?  It could be a player, coach, moment, or venue.

We started with the ACC.  North Carolina and Boston College ran away as BN's favorite ACC schools.  We then moved on to the B1G 10, where Michigan was the clear favorite.  Then we jumped down south, where Tennessee and its hatred of Kiffin prevailed as BN's most-liked school in the SEC.  Our last vote was the Big XII, where Texas predictably lapped the pack.

I am going to skip the Big East (unless somebody objects), and finish with the Pac 12.  Fire away! 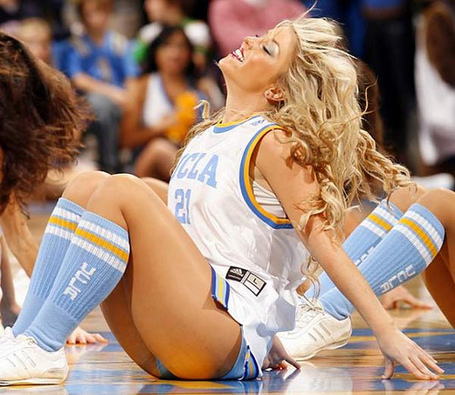 ARIZONA - Lute Olson roamed the sidelines for a long time.  Probably too long.  I remember when he was at his best, and he had Bibby, Dickerson, Terry, Woods, and Jefferson.

ARIZONA ST. - One of the strangest programs in the country.  ASU presumably has it all; coeds, weather, great atmosphere, and low academic standards ... I don't understand why they don't have any top tier programs other than baseball.

I usually make the annual UCLA-Cal game.  Haas Pavilion is a good place to watch a game, especially when "Let's Go!" happens.

COLORADO - Growing up, I loved Michigan football.  I watched nearly every Saturday, and happened to be watching live when Kordell Stewart unleashed a Hail Mary bomb to Michael Westbrook in Ann Arbor.  The ball traveled for about 72 yards and was caught on a deflection.  A true miracle.

OREGON - Eugene is fun.  The Ducks' style of play is fun to watch.  But, of course, the first thing that comes to mind is Phil Knight.

OREGON ST. - Like Eugene, I genuinely like making the trip to Corvallis.  There is a hotel literally across the street from Reser Stadium, and Gill Coliseum isn't far away.

STANFORD - My cousin went to Stanford in the '90's, and we went to numerous games at Stanford Stadium.  In 1993, I watched then #2 Notre Dame beat Stanford something like 50-20.  The game wasn't even that close- I think Notre Dame scored 40 in the first half and then put on the brakes.  While Stanford couldn't spoil Notre Dame's party, they sure spoiled ours.  In 2001, UCLA started off the season beating Alabama in Tuscaloosa, Kansas in Lawrence and Ohio St. at home, followed by blowing out three straight Pac-10 opponents.  They debuted at #1 in the BCS rankings.  Then they ran into the Tyrone Willingham buzzsaw.

UTAH - Aaron Rodgers.  The QB my 49ers could have had if they had not fallen in love with Alex Smith (who happened to be Reggie Bush's high school QB- go figure).  Thanks a lot, Urban Meyer.

WASHINGTON- Honestly, I want to like these guys.  It's a good school with good tradition.  I have a good friend that is a Huskie.  But after the ball off the face, the ball grab, and the Sarkisian hire, I can't.

WASHINGTON ST. - I had a good time at a brewery in Bend with a few  players from the Wash St football squad a few years ago.  Nice guys.  Ryan Leaf wasn't a nice guy.  Unfortunately, he's the one synonymous with Washington St. football.

Who is your favorite non-UCLA Pac-12 school?