Share All sharing options for: "UCLA Is Now Like The Clippers" - And Other Grumblings From The Rose Bowl

Those particular words were heard toward the end of my Saturday afternoon at the Rose Bowl, but the general language of discontent with UCLA Football and its leadership were present throughout the beatdown by the Longhorns. As the game took its course, the criticism of Dan Guererro, Rick Neuheisel and pretty much everything responsible for the current state of UCLA football was flying around my seat in Section 1-L. After making the trip down to the Rose Bowl from NorCal for my first Bruin home game in too many years (hint, my last game at the Rose Bowl, there were still people saying that Karl Dorrell could coach with a straight face), I was greeted with a sense of dissatisfaction, if not apathy for the direction of the football team that I never saw in the KD years. And that was before kickoff.

As the game went on, there was plenty of unrest from the fans around me - whether it be the early calls for Richard Brehaut to enter the game - quickly rising from isolated yells for a change to a sustained chant of "Brehaut, Brehaut" after Kevin Prince's 3rd Int - to frustration with the lack of fundamentals and unevolving strategy by the defense, and a general sense that the Rick Neuheisel era at UCLA is coming to an end. Our own questioning of whether Dan Guerrero should be the person to make the next hire after two football coaches have gone down under his watch was echoed from walking through the golf course en route to the game to the postgame call-in show during the drive out of Pasadena. Whether that many people attending games are reading BN, or talking to people who do, or are coming to their conclusions on their own, it remains that the fans - paying customers at that - of the team are losing confidence in the leadership of the football team and of the athletic department. For many, that confidence is already lost and unlikely to return without dramatic action.

I suppose that I could have guessed that things were going wrong in Pasadena while heading to the Rose Bowl earlier in the morning. While a friend and I drove in, there was a noticeable lack of traffic. While usually the complete absence of a wait to enter a stadium parking lot would be a great thing, there is a problem when the Bruins are playing a marquee opponent, and getting into the golf course during prime tailgating time is faster than a navigating a McDonalds drive thru. To be fair, the Texas state fair/alumni party might have kept some folks away. I know that I was hesitant to stick around when their MC asked if any Garth Brooks fans were around. With that said, tailgating at the Rose Bowl, particularly on the golf course is one of the best ways to spend a Saturday. I know that time and distance had made me forget how great it really is; as bad as the rest of the afternoon became, there is a good chance that I will be making the trip again this fall, in large part because of that part of the UCLA Football experience.

Nestor noted the lackluster attendance in his postgame post, but it really does bear repeating. Only 54,583 people showed up to the Rose Bowl to see the Bruins take on Texas. That includes by my estimate ~ 15,000 Texas backers. Factoring in the visiting support, that is no greater number of Bruins than came to watch the near-disaster against San Jose State. The low turnout in the opener, while disappointing at least can claim the excuse of being a late-evening game against an undesirable opponent. Saturday saw the Bruins playing one of the storied programs in college football (that while coming off a weak season, brought a talented young - and ranked - squad to Pasadena), on a beautiful afternoon with great weather to tailgate and watch a game. While the start of classes will allow more students to travel to the Rose Bowl in the coming weeks, there is no such influence on the alumni base and other Bruin Football fans in Southern California to keep buying tickets and showing up to games. 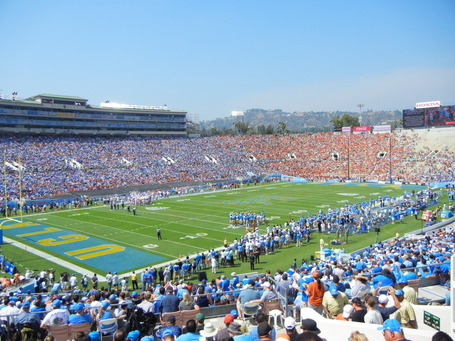 While the decline of UCLA Football is a tragedy in its own right, what needs to be remembered is the financial impact that Football revenue has on the rest of the university's athletic programs. We have written on this topic in the past, and the lessons have not changed. During the years of football mediocrity under Karl Dorrell and now Rick Neuheisel, UCLA has seen ticket sales and overall revenues plateau, and begin to decline while the average price of a ticket increases and (despite the financial difficulties faced by many universities) money has poured into college athletics.

With the mediocre play on the field together with the carelessness on the sideline and inside Morgan Center, Los Angeles is tuning out the Bruins. The bandwagoners left the Rose Bowl some years ago, but now even the alumni and lifelong fans are starting to stay home and turn in their season tickets (or sell them to fans of the opposition). Morgan Center and UCLA Football has reached a fork in the road, and must make a choice: do they break with the dysfunction of the recent past and present, realizing that dramatic action is needed to get the program back in the right direction and investing in the resources to make it happen. Or will Dan Guererro, Gene Block and the rest of the UCLA administration be happy to present the Clippers of college football, a program which is not only becoming an afterthought both in college football circles and in Los Angeles itself, but thanks to the revenue lost by circling the drain, will drag the fortunes of our non-revenue sports down with it.

What will it be, Dan and Gene?