Share All sharing options for: Adidas and Morgan Center Continue to Serve Up Mediocre Uniforms for a Mediocre UCLA Football Program

We've got some great news on the basketball front this week. The way Ben Howland has turned around our men's basketball program should provide a big wake-up to UCLA.  It's amazing what happens when you hire someone from outside of Morgan Center's diseased culture of mediocrity.  If UCLA could make a Ben Howland type hire for football, well, let's not delude ourselves into thinking that any of the Morgan Center sycophants "get" football.

On football, we've spent a lot of time discussing the disappointing performance against a perennial doormat in SJSU. We eviscerated Morgan Center, Dan Guerr-error, and Rick Neuheisel, as well as Gene Block for the diseased culture of mediocrity that surrounds UCLA football, following the beat-down a decidedly average Texas squad laid on the Bruins at the Rose Bowl.  But this past weekend also provided a great illustration of another place where UCLA has proven itself to be woefully inadequate: the uniforms our Bruins wear when they step on to the gridiron.

Not only did the Bruins debut the 2011 version of their stretchy Adidas blue uniform, but the weekend before last also saw a pair of Adidas schools (Michigan and Notre Dame) roll out some pretty awesome throwback uniforms for the first game under the lights at the Big House.  This, of course, after Maryland made national headlines with their Maryland state flag inspired Under Armour legacy uniform (which we'll come back to later).

So, since our fellow Adidas schools look sharp (both in their throwback uniforms and in their normal uniforms), it begs the question: are our pathetic Pop Warner looking cheap uniforms due to an Adidas problem or a UCLA problem?

Here at BN, we've made no secret of our displeasure at UCLA and Morgan Center's complete inability to aggressively market itself using a 21st century mindset.  Often, it seems like UCLA is stuck in a 1985 mindset, which shouldn't come as a surprise since most Morgan Center bureaucrats are part of the same unimaginative core of Donahue sycophants that have us stuck in a conservative, play not to lose mindset.  It's the mindset that thinks mediocre wins against bottom-feeder programs like SJSU is acceptable.  It's part of the diseased culture of mediocrity that permeates everything associated with UCLA football.

And, to me, there's no better visualization of that mindset and this diseased culture than the cheap, second-rate Pop Warner looking uniforms that our football team wears on Saturday now.  This is a topic we've hashed out on BN time and time and time again. UCLA used to have uniforms that were some of the best in the nation, from Gary Beban to Troy Aikman to Cade McNown to Maurice Jones-Drew.  Now?  UCLA doesn't even have proper UCLA stripes.  How sad is that?

Let's break this down in detail after the jump.

It's painfully obvious that Morgan Center has no interest in effectively marketing UCLA football. For older generations, it sounds so superficial, and frankly, silly, but the reality is that these young kids love the "cool" uniforms that the Ducks, Terrapins, and various Nike schools have been rolling out the past few years.  It's a known recruiting tool.  After all, these kids are only 17 or 18 years old when they are deciding on which school to ply their athletic trade at.  Did we all forget what it was like to be 17 or 18?  Image is everything; being cool meant wearing the stylish clothes and being around whatever the sleek "in" thing is.  Right now, that means Oregon is cool.

Look around college football. Oregon has something different on every week.  Nike is rolling out some sleek uniforms for Michigan State in their upcoming rivalry game against Michigan. Stanford, Ohio State, and LSU will all soon be joining Michigan State, Georgia, and Boise State with one time Nike Pro Combat alternates.  Some are ugly, but that's besides the point, for all the same reasons I mentioned above re: Oregon, "cool uniforms" and recruiting (for more on the new Nike uniforms, I encourage you check out Paul Lukas' takes here). Yes, Maryland has rolled out some, umm, interesting uniforms so far this season.  But when was the last time you talked about Maryland football? In terms of raising their national exposure and profile, it sounds like mission accomplished.  All thanks to their uniform.

Not convinced that this kind of stuff matters to the guys on the field? Let's see what Anthony Barr had to say on Twitter (which was re-tweeted by Dietrich Riley): 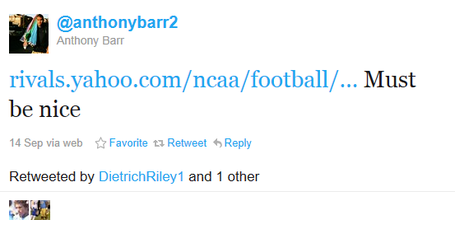 The link he has connects to a Yahoo! Sports article highlighting Nike's line of Pro Combat uniforms for Michigan State, Stanford, LSU, Ohio State, Georgia, and Boise State (and SI has a good, quick summary of Nike's Pro Combat uniform line for this season here). You're right Anthony, it would be nice to have an athletic department and apparel provider that cared about aggressively marketing UCLA football and using uniforms as a tool to build excitement around an otherwise moribund program. 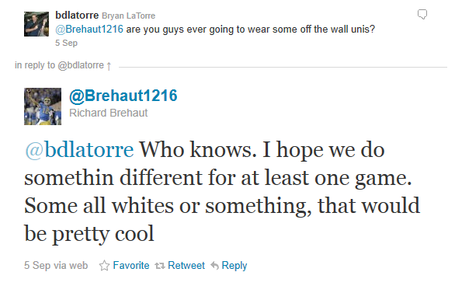 So yeah, these kids do pay attention to this kind of stuff. And at the bare minimum, from a merchandising perspective, it makes sense to do an occasion alternate uniform that you can push in store windows.  Am I advocating something crazy like we've seen Nike do for Boise State and Oregon?  Not in the least bit.

Yes, UCLA's uniform is a classic that doesn't need to be tweaked, but, let's not forget how popular (and totally awesome) the Gary Beban throwback uniform was before.  If Morgan Center was serious about aggressively marketing UCLA football, we'd see the occasionally alternate uniform, with something cool like what Washington did with their special edition 9/11 uniform (the white helmet with gold stripe and matching pants was sleek and a very nice and classy tribute to the victims of September 11), or what we're going to see for Army and Navy's annual game (also known as a game between the greatest college kids in the United States): 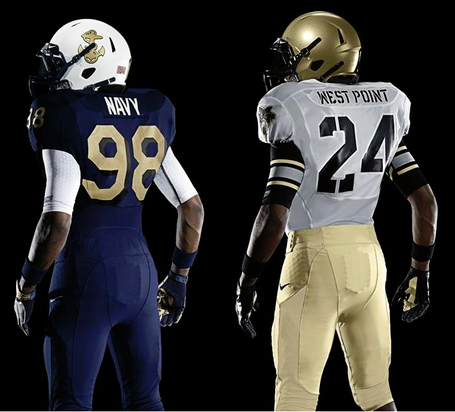 So, Bruin fans, when is Morgan Center going to take marketing football seriously?

If our current uniforms are any indication, they're willing to settle for total mediocrity.  Last year, I put the new stretch fit Adidas uniforms on blast for looking like cheap Pop Warner mall screen-printed rags. But, to be fair, they were just rolling out these new uniforms in the middle of the season, and so perhaps, after being told repeatedly how butt-ugly they were, Morgan Center would work with Adidas and get our uniforms properly squared away during the off-season.

Apparently not.  Let's start with our iconic UCLA stripes:

Why do I keep calling them UCLA stripes? Because UCLA is the school that made the shoulder stripes iconic, when Coach Red Sanders added the shoulder stripes to create the illusion of motion in 1954. How egregious are these truncated "stripes" that Adidas has stuck us with?  As the very good uniform-centric blog UniWatch explains:

My first thought was that it’s kinda sad when UCLA can’t even wear legitimate UCLA stripes.

Good job Adidas and Morgan Center: you turned our iconic stripes into a joke.  It'd be like Majestic botching the Yankees' iconic pinstripes.  Of course, Adidas would have us believe that the new lightweight, stretchy material makes it difficult to properly create shoulder stripes (since they also botch it on NFL uniforms for the Colts, as Reebok is an Adidas owned company).  Except Nike proves that's not true with LSU's Pro Combat uniform this season: 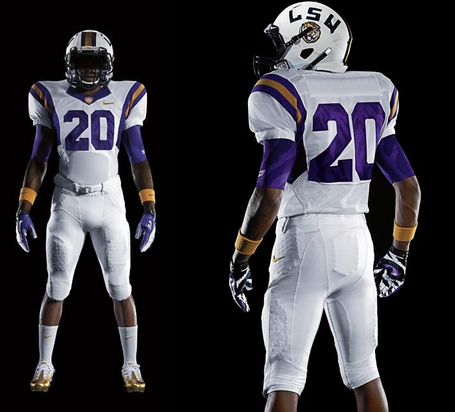 So, this of course begs the question: if Nike can get it right, why can't Adidas?  And why isn't Morgan Center being more proactive in making sure Adidas doesn't botch our iconic uniforms.  It's as if the chumps at Morgan Center have zero conception of marketing and branding.

But it's not just limited to failing to preserve one of UCLA's traditional and iconic uniform elements. If that wasn't bad enough, Morgan Center has showed an absolute indifference to the football team, letting them wear uniforms that look like some pimple-faced kid at the mall screen-printer threw some names on the back of these uniforms at the last second.  It's just cheap looking and it makes us look small-time: 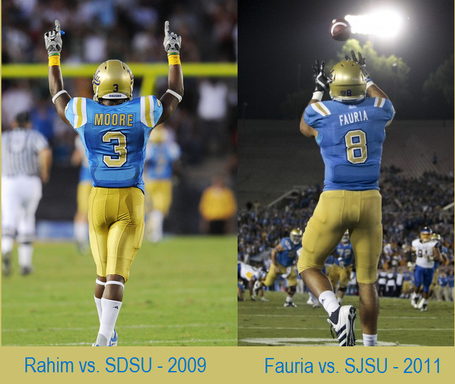 We used to have our players' name on the back of their uniforms in matching gold with blue trim, like our uniform numbers.  Now, we have screen-printed on plain white names that don't even come close to matching the uniform numbers.  It looks cheap and tacky.  I've seen high schools with more professional-looking uniforms than the lame outfits we have this year.

Look, I get it: relatively speaking, our cheap-looking uniforms are pretty low on the priority list for a listless program with coaches nearly in tears, players mentally checked out, all managed by an athletic department infected with a diseased culture of mediocrity.  But our cheap uniforms are the perfect visual expression of what UCLA football has become: a shell of its former glory, marked by an athletic director who is too cheap to invest in turning UCLA football into a winning program and too lazy to aggressively market a formerly dominant football program in the second largest media market in the country.

It's pathetic.  But exactly what we would expect from Dan Guerr-error, who was only too happy to hand Adidas our uniform and equipment contract without leveraging Under Armour's interest into a better deal for UCLA. Just another glaring example of UCLA's diseased culture of accepting mediocrity.