WESTWOOD - September 21, 2011.  As the game clock wound down to zero, Dan Guerrero had an epiphany.  It was the sort of idea that propels someone to the stratospheres of imagination and renders a person completely oblivious to his surroundings.  And it may change the destiny of a program forever while shaking the foundations of college football.

UCLA had just been defeated at the Rose Bowl by an inspired but young Texas team.  After a subpar performance the previous week against a less than intimidating San Jose State team, UCLA opened the game on a high note, only to fall quickly into the black hole of football, or what Shane Falco refers to as "quicksand".  The Bruins never recovered and lost the game 49-20, leaving all 14 of the remaining UCLA fans despondent.

But it didn't matter.  The idea struck Guerrero like a UCLA linebacker from the ‘80s.  Since his arrival, he had tried to bring UCLA to the forefront of college football.  He first fired Bob Toledo after discipline issues, then Karl Dorrell after a string of mediocrity, to finally hire prodigal son Rick Neuheisel.  Nirvana still seemed a distant dream.  With tectonic shifts in the landscape and rising teams in the conference, Guerrero knew that he had to act fast and make a splash.

And a splash he made.

"Starting in the 2012 season, UCLA will no longer be a member of the Pac-12 in football, but will become independent," Guerrero announced in a press release.

While ideas of becoming independent are nothing new in college football, they are usually reserved for teams with a national following, or to maximize revenue potential.  This is where Guerrero's flash of brilliance shines through.

"You see, UCLA football does not have a revenue problem, it has a spending problem.  It occurred to me after we played San Jose State, and paid them $500,000.  Why shouldn't teams pay to play a brand name like UCLA?"

Traditionally, football powerhouses schedule lesser teams from outside their conference to fill their schedule, and pay them a good deal of money to play in their home stadium.  These teams are generally known as "cupcakes". After expressing a certain uneasiness with the idea of expansion, Guerrero finally formulated his plan.

"I figured, with the expansion, clearly we cannot compete.  But why be the doormat, or cupcake, of only one conference?  Why not be the cupcake for all of college football?  At UCLA, we like to challenge the future."

The idea is simple:  UCLA will no longer play in the Rose Bowl but only on the road.  As such, they will get paid a fixed sum by whoever schedules them to play in their stadium, in addition to part of ticket sales.

"Renting the Rose Bowl has become expensive.  Instead, we are getting rid of that expense and turning it into fixed revenue," said Guerrero with googly eyes.

If San Jose State can get $500,000, UCLA, with its brand name could likely receive up to one million dollars per appearance, or $12 million throughout the course of the season.  Of course, the downside is a potential increase in traveling costs, but the Morgan Center has a practical solution in mind:  Amtrak.

"Traveling by train reduces our expenses as well as our carbon footprint.  It is the best of both worlds," said an obviously proud Guerrero.

The move comes with additional benefits.  With an alumni network that is spread throughout the country, this will allow Bruins in exile to see their team more frequently.  More importantly, opposing teams can no longer visit the Rose Bowl, put a beating on the Bruins and impress California recruits.  Instead, UCLA might be able to swipe out-of-state recruits if it pulls off a huge victory, like Appalachian State did against Michigan.  It doesn't stop there.

"We felt bad for our student athletes to have to play in front of a half-full stadium.  This will give them the chance to play in all the exciting venues of college football, like Michigan and Alabama, where stadiums will be rocking from beginning to end."

UCLA fans should get used to sights like this: 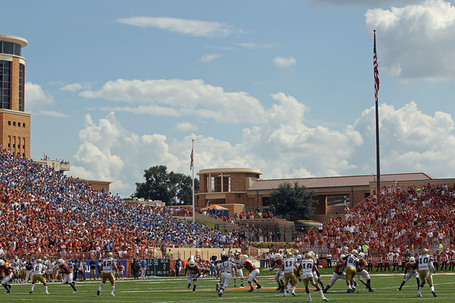 But how does a team become a cupcake?  It is easier said than done, but the man with the plan has thought of everything.

"After this season, UCLA football will have an all-volunteer coaching staff."

The goal is two-fold:  eliminate unnecessary expenses, and provide a training ground for tomorrow's coaches.

"This will ensure that the staff is dedicated to UCLA.  In return, they get unparalleled experience.  After all, the university's mission is to educate."

When reached for comment, current head coach Rick Neuheisel had no comments but did not seem phased.

"Right now, our priority is to go get us some Beavers and to hit them hard."

Guerrero left the best part for last.  There have already been grumblings from alumni about potentially losing the rivalry against U$C.

"The game against U$C can still be on our schedule.  It's just that now, they have to pay to play us.  We hurt them right where it hurts the most: the wallet."

The logic is impenetrable.  The plan, magnificent.  The possibilities, endless.