UCLA Football fans today were treated to an uplifting email from UCLA Athletics.

Entitled "UCLA Gets Pac-12 Win", the email shows that the athletic department at UCLA intends to take full advantage of the momentous occasion, namely an undefeated Pac-12 record and a spot at the top of the South Division.

"It has been a while since our program has been in this position," noted Athletic Director Dan Guerrero, who eagerly requested a press release to be sent out and updated his list of achievements accordingly.

The Bruins defeated perennial power Oregon State in Corvallis, despite facing a fearsome redshirt freshman Quarterback and fearless walk-ons.  As expected, the game was a grind-it-out affair, with the outcome in doubt until the waning minutes of the fourth quarter.

"Playing with these Beavers is always a messy affair," said Head Coach Rick Neuheisel. "We worked hard to come out on top."

As an added benefit to the victory, it seems that the team was able to find its identity, running the ball 47 times and passing only 12 times.  More impressively, UCLA was able to overcome the intimidating Beavers while using only a few of their players and a playbook printed on a 3x5 index card.  At the bequest of the Athletic Department, the Special Teams unit did not make the trip to Oregon in order to keep costs down.

For their efforts, the players will be rewarded with a parade in Westwood this week, complete with a "First to 1-0" float and t-shirts to be sold at the Student Store for $27.19 to commemorate the victory. 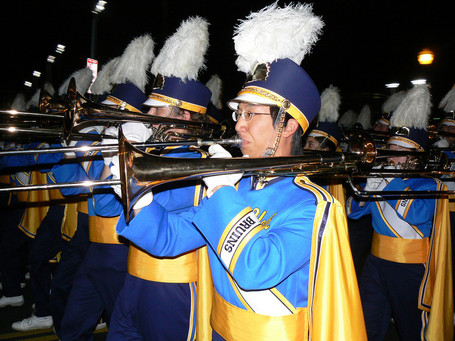 "Our goal is really to give the students and athletes a once-in-a-lifetime type of celebration," said Guerrero.  "Who knows when the next occasion will come around?"

Retired raincoat salesman Morty Seinfeld will also be recognized during the parade for finding the identity of the UCLA football team in his retirement community in Boca Raton, FL and promptly mailing it to the coaching staff prior to the game.

Naysayers were quick to point to the looming showdown against Stanford this Saturday.  Beaming with enthusiasm, coach Rick Neuheisel was just as quick to temper the negativity.

"We play our season one week at a time," said Neuheisel.  "I'm proud of our boys.  This was a must-win game for our program, and now it's a must-celebrate occasion."

Who doesn't love a parade?!